Treat Yourself to a Kringle with the BBB 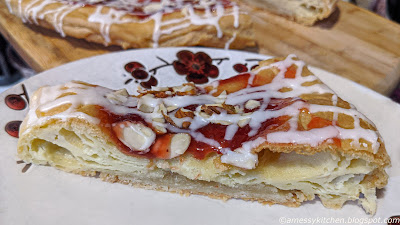 If you grew up in the Midwest or perhaps a town with Scandinavian roots, then you probably know what a Kringle is.  While the shape differs globally, a pretzel shape in the Netherlands and an oval here in the US, Kringles are generally a multi-day affair made of Danish pastry that is layered, filled and shaped, then baked and iced.  They are quite popular, shipped all over the states especially during the Holidays, and flavor options have expanded enormously in the past decade or so.  We are sharing a modified, easier and faster version!  (It all comes together in under a couple hours if you have your ducks in a row.)

This quicker Kringle starts with a crispy, flaky pastry base followed by a choux paste top.  For even more convenience, you can make the bases the night before, wrap, and top in the morning.  While I have made a different version of Kringle before, this is actually the first time I have made pâte à choux!  It's not difficult, I may have over mixed it just a tad, but it still turned out delicious.  I suspect I left too much moisture in as well and should have baked a bit longer to dry out the choux.  No matter, more delicious practice ahead!  The notes I looked up later say to:

Add the flour all at once and quickly stir

Continue heating for another 2 minutes to drive out extra moisture. The bottom of the pan should form a film of choux.

Remove the choux and transfer to a bowl. It must cool a bit before adding the eggs or else you will cook them. Using either a spoon or paddle attachment with a stand mixer, begin incorporating the eggs one at a time.

Wait until the egg is fully incorporated before adding the next

Stop when you reach a smooth and soft texture. Test it by using a spoon to scoop up the dough. It should fall under its own weight. If it does not, continue to add eggs. Now your choux is ready for piping and baking.

I also found that to encourage a lot of puff, you should pipe using a ridged piping tip to provide more surface area to get the largest oven pop.  Next time...  So many flavors to try out!  As there is little to no sweetener in the pastry bases, all the sweetness comes from your chosen toppings and can be tailored to suit your taste.  Our recipe is based on a King Arthur recipe for a Butter Pecan Kringle with lots of sweet caramel sauce and sugar.  Despite my sweet tooth, that option was a little too tooth achingly sweet to try out so I went with the host kitchen's suggestion of an almond raspberry Kringle.  I love almond almost as much as lemon.  Oooo, lemon Kringle!  Lemon, cream cheese Kringle!  Oh I totally have to try that, how could I not have thought of that before?  Well, this one was completely delicious and I would have liked it with apricot jam as well. 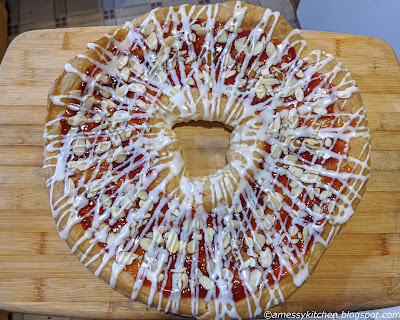 The toppings are limited only to your imagination.  We would love for you to try out your favorite flavor for this recipe and join in as a buddy baker this month!  You don't have to have a blog to participate, a picture will do. Just send a picture or your post of your finished loaf to Feeding My Enthusiasms by the 29th of this month. Be sure to put BBBuddy in the subject line. You will receive a Bread Baking Buddy graphic to keep or add to your post, and be included in our Buddy round up at the end of the month. New recipes are posted every month on the 16th. Check out our Facebook group to see the participants' baking results during that time. 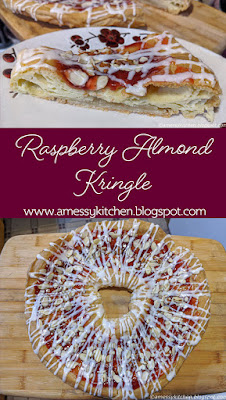 Here is our host's version which is a non-dairy option:

To make the base: Combine the margarine, flour, sugar and salt, mixing until crumbly.  I used a food processor cut the fat into the flour mixture.  Add the water, and stir to make a soft, sticky dough.  I took the host kitchen's suggestion and used a fork to stir as I slowly added the water.  Worked great.

Wet your hands, pick up the dough, and shape it into a 12" x 8" oval ring on the sheet pan; or a 10" ring in the pizza pan. This will be messy going, but just keep wetting your fingers and pushing it into a ring. An easy way to approach this is to first divide the dough into four pieces; roll each piece into a 9" rope, then connect the ropes and shape them into a ring.  (I folded the dough over on itself until it bound together enough to separate into four pieces which I rolled into quarter circles and joined, then covered with plastic wrap and rolled out until flat.)

Once you've made the ring, flatten the dough so it's about 1½" wide; basically, it'll look like a train or NASCAR track. Make a thin rope out of the almond paste and put it over the dough, connecting the ends so that the whole 'track' has a ring of almond paste in the middle of the track. 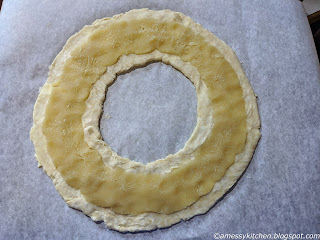 To make the pastry topping: Place the water, margarine, and salt in a saucepan, and heat over medium heat until the margarine is melted and the mixture is boiling.

Immediately add the flour, stirring with a spatula until the mixture is cohesive and starts to form a ball.  (Cook a while to drive off some moisture until it starts to leave a film on the bottom of the pan.)

Transfer the batter to a mixing bowl and let cool for a few minutes so as not to cook the eggs. Beat in the eggs one at a time, making sure each is fully incorporated before adding the next. Add the almond extract at the end.

Spread the pastry along the ring, covering it and the almond paste completely; you'll now have a much wider ring, though it won't be completely closed in the center; it should still look like a ring. 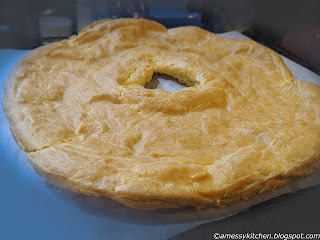 To add the topping: First, have the sliced almonds all ready beside the pan of kringle; you'll be sprinkling them atop the jam as soon as you put it on.

Stir the jam with a fork to break it up and then spread it over the kringle in a thin, even layer, mostly in the middle. Sprinkle sliced almonds atop the raspberry jam, pressing them in gently. Allow the kringle to cool completely.

To make the icing glaze: Stir together the confectioners' sugar, salt, almond extract and enough non dairy milk to make a pourable glaze. Drizzle it over the kringle.

To serve, cut the kringle in 2" slices.
If you prefer, you can bake the base, almond paste and cooked dough topping the day before serving, then wrap well and let sit on the counter overnight. In the morning add the jam, almonds and glaze.

Topping
12 ounces caramel, cut from a block (about 1 cup, packed); or about 3 dozen individual caramel candies*, unwrapped
2 cups (227g) toasted pecan halves
*Use fresh, soft caramels. If using harder, supermarket-type caramels, add a couple of tbsp milk or cream when melting, to keep them soft on the kringle; or substitute caramel sauce.

Instructions
1. Preheat the oven to 350°F. Lightly grease (or line with parchment) a baking sheet that's at least 18" x 13"; or a 14" round pizza pan.
2. For the base: Mix together the butter, flour, and salt in a medium bowl until crumbly. Add the water, a tablespoon at a time, mixing in between until you’ve made a soft, sticky dough. Divide the dough into four pieces and roll each piece into a 9" rope. Connect the pieces into a 12" x 8" oval on the prepared baking sheet and, with wet fingers, flatten the dough to 1 1/2 ̋" wide, retaining an oval opening in the center.
3. Wet your hands, pick up the dough, and shape it into a 12" x 8" oval ring on the sheet pan; or a 10" ring in the pizza pan. This will be messy going, but just keep wetting your fingers and pushing it into a ring. An easy way to approach this is to first divide the dough into four pieces; roll each piece into a 9" rope, then connect the ropes and shape them into a ring.
4. For the pastry: Place the water, butter, and salt in a medium saucepan over medium heat and bring to a boil. Add the flour all at once and stir vigorously until the mixture is cohesive and forms a ball. Transfer the batter to a mixing bowl and beat in the eggs, one at a time, beating until each egg is absorbed before adding the next. Add your choice of flavoring at the end.
5. Spread or pipe the pastry over the ring, to make an oval of pastry that completely covers the oval of dough. Bake for 50 to 60 minutes, until deep golden brown. Remove from the oven and let cool completely.
6. For the topping: Melt the caramel in a heatproof measuring cup at half power in the microwave in 30-second bursts, stirring after each round, until the caramel is smooth. Pour the caramel over the pastry and immediately top with the toasted pecans. Let cool.
7. For the glaze: Whisk together the confectioners’ sugar, salt, flavoring, and enough cream (or milk) to make a pourable glaze. Drizzle over the kringle before serving.
8. Store at room temperature, lightly tented with plastic wrap, for a day or so; freeze for longer storage. Kringle is best served the same day it's made. If you plan on serving it the next day, add the caramel, nuts, and glaze just before serving.
9. Want to get a head start? Bake the base pastry up to two days ahead, then cool, wrap, and store at room temperature. Top with filling and icing just before serving.

The rest of the Bread Baking Babes
Approximate nutrition for one slice of Kringle: 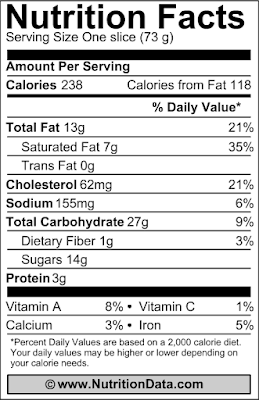 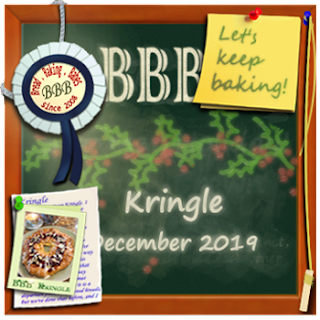