Pan-Seared Salmon with a Maple Glaze with Green Beans with Parmesan and Lemon.  Now tell me that doesn't sound appetizing or like something you'd find on a spa resort menu.  Actually, it is.  This method was shared by Chef Kathleen Daelemans who at the age of 22 she became the spa chef at a Hawaiian resort.
You can check out the original article at http://www.foxnews.com/story/0,2933,582824,00.html: Maple Syrup, the New Sugar?  I mentioned before that this particular meal was such a hit that it disappeared too quickly to even get a shot of it.  We also ended up giving up a large portion of our own to refill Steph's plate at least three or four times.  This time I got a much larger fillet to make sure there was enough to go around.  Now since this is pan-seared, I did end up having to use two pans to do the searing since there is no pan big enough to fit that whole long piece of salmon.  That's okay though, I just got my first cast iron pan and I'm working on getting it seasoned anyway.  You need only use one pan for the glaze.
I have a little admission to make... I have had a very difficult time cooking salmon in the past.  I either get it underdone or too dry, whether grilling or pan frying, although I have had some success with baking it.  My poor hubby would love salmon on a weekly basis, but it ends up being every few months at best.  Now this recipe...  I could make this on a weekly basis.  It's super simple, just a few ingredients and you end up with a gourmet quality meal.  (The green beans with parm and lemon are quite tasty as well.  Especially if you throw some garlic in the mix too!)  Make sure you get a fillet with skin on, as I'm sure that holds in the moisture while searing.

Pan-Seared Salmon with a Maple Glaze

Salt and pepper the salmon, pan-sear it with two teaspoons of olive oil in a good quality, non-stick pan with a heavy bottom.  Cook skin side up over medium heat for about five minutes. If the fillet is quite thick, add a minute or so.  Turn over, cook a few more minutes, until done.  Remove fish.  Add 1/4 cup of chicken stock, orange juice and pure maple syrup.  Bring to a boil, reduce and simmer until thickened to a nice glaze. Turn off heat and add fresh thyme, parsley or any herb you choose.  You may either return the fish to the pan to glaze it, or pour the reduction over the fish. 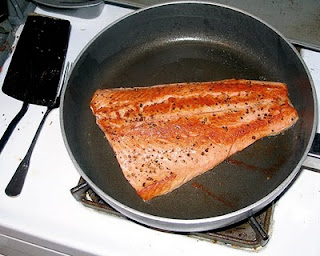 See that lovely crust?  Now that keeps your fillet nice and moist.  It worked just as well in the cast iron, though a tiny bit stickier.  Need to season the pan more.  It's a work in progress.  When the fish is done, or darn near done, remove it to a plate and make the glaze.  Only takes a couple minutes. 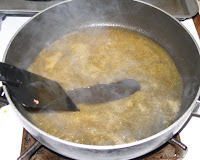 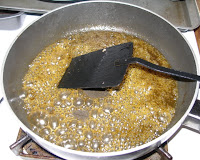 Now I think I prefer sticking the fish back into the glaze, (skin side up of course) and letting it glaze and caramelize just a touch.  You can also pour the glaze over the fish but you can end up with too much that way.  If you glaze it in pan, it makes doubly sure that the fish is done and heated through and you get the most wonderful slightly salty sweet crust on the fish. 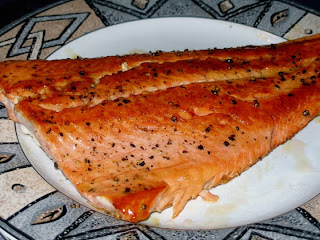 This fillet could actually use a minute more in the pan to get a good layer of glaze coating it.  Still delicious though.
Once again, tonight S had thirds and even R asked for seconds.  This is definitely a keeper.  My hubby, who is somewhat of a salmon purist, said that he preferred the pan glaze to the poured glaze.  (I did one of each.)  Too much glaze with the poured.  If you shake it around in the pan for a minute, you'll get plenty on there.  Just mind the heat, you want it nicely coated, not burnt sugared.  I suggest turning it to med-low when glazing the fish.  We did the parm-lemon-garlic green beans the first time - fabulous.  Tonight it was our favorite italian salad.

Try this out, you won't be disappointed!  This is going in my "dishes to make for company" file.  (Which is especially nice since my Dad-in-law is vegetarian.)
at January 25, 2010