So I said in my blog description that I was going to try new and interesting things this year.  And in one of the baking blogs where I have recently been lurking, I found a baking challenge:  Naan.  Now I've never had any type of Indian flatbread, so this will definitely be new and interesting.  My hubby on the other hand has quite a few coworkers from India, so his exposure to Indian food has been much greater than mine.  I'll have him do a taste test when he gets home from work.  Wish me luck!  I will modify the original recipe a bit because I want to try out some different techniques and see how they turn out.  Check out the original recipe at http://cookiebakerlynn.blogspot.com/2010/01/some-baking-naan-sense.html
(Naan must be in the air right now, because Artisan Breads in Five Minutes posted a gluten free naan today...) 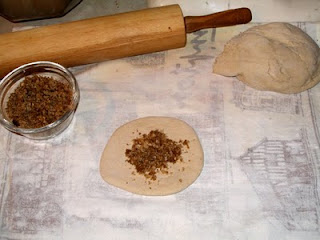 So instead of working in the filling in big chunks, I took a tip from another naan recipe and ground up my filling so I could just enclose it and then roll it out.  As you will see, I ended up with a pita like structure doing that way.  Not bad, but I don't think it should be that way.  Next time, I'll stick with the original directions.  :) 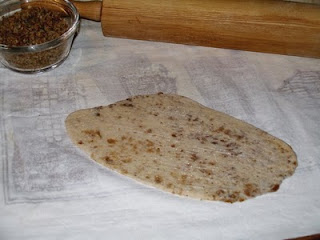 I decided to try two different cooking techniques, the one listed which is a skillet method, and the oven broiler method.  So this first one I brushed with butter and tried with the broiler.  The next one I forgot to butter.  Don't forget to butter.  The rest I did in a skillet.  My conclusions?  The oven method may be reputed to give more authentic results, but it is very persnickety.  I liked the results from the skillet much better but definitely like the flavor the butter added. 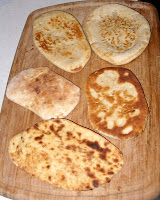 So the bottom one I rolled too thin since I wasn't sure how thin to roll for the first one.  It did have the best incorporation of filling though.  (No pita pocket.)  Then there is the middle left, which I forgot to butter.  I repeat: Don't forget the butter.  Then middle right is my first skillet attempt.  Too much oil I think, but nice and soft.  The last two on the top were I believe the closest to what they should be.  So when hubby got home I asked him to try them out.  He said he was more used to the plain, somewhat bland he said, flatbreads and wasn't quite sure about a sweetish one.  Then he took a few more bites.  And a few more.  And then proclaimed that he could keep coming back to these all night.  So I think I achieved a moderate degree of success.  Now I need to try some good authentic naan to aquaint myself with the proper characteristics. 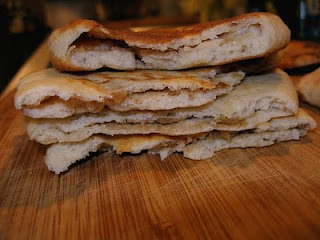 You can see that the fold and roll left me with a pita-like pocket.  It probably would have been better to work in the whole raisins.  But as I was trying new things, I tried lots of new things at once.  And I learned lots of things too!  I still don't know if naan should have a pocket like that.  I'll have to ask some of my hubby's coworkers.  Good resource!
Thanks to Cookie Baker Lynn for pushing my baking horizons. 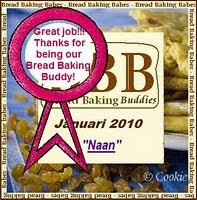