"A Majorcan favorite, ensaïmadas are warm, yeast-based cakes fashioned into round, coiled shapes."  This is the baking challenge for this month.  Since my brother and sister-in-law just visited spain over New Year's this will be like a nice little return trip.  The question will be whether to make the one big spiral that can be cut and served to many, or the individual little "snails" that are more portable and hand friendly.  I think the little ones will be more conducive to sending to work with the hubby. 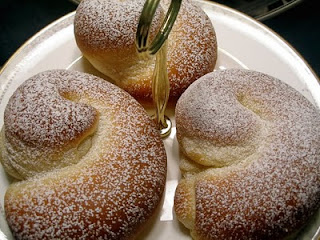 Even though it can be more difficult to work with, I must admit that I love soft or slack bread dough.  So far, my all time favorite is the Overnight Ciabatta at Wild Yeast.  That dough is like handling silk; as long as you have enough flour dusted over it.  Sooner or later, I will hit up the butcher for some leaf lard and render it down to have on hand, but for now I will be using butter in place of the traditional lard.  I do love butter...  Evidently, the test for telling if the ensaïmada in question has used lard or not is that a true ensaïmada must stain a piece of paper with the pork lard.  I know some bakers who swear by lard in their pie crusts for the flakiest results.  And it has its highest proportion of fat as monounsaturated fat, so not bad for you.  Interesting factoid:  the increasing incidence of coronary heart disease in America over the last century can be directly correlated to the abandonment of good natural animal fats like butter and lard in favor of processed, hydrogenated, bleached shortenings and refined vegetable oils.  Another good thing about lard the that it has a high smoke point, good for frying.  I understand you actually end up with less grease absorption when frying in lard.  So I guess Emeril was right all along!  More pork fat!  Seriously, when I added more fat back into my diet (along with removing most refined carbs and limiting sugar intake), my triglycerides dropped 56 points to a completely normal reading.  Not to mention the 42 pounds I lost.  Woot!  And I think I at least doubled my fat intake.  Animal fat.  Good stuff.  Sorry, I'll get off my soapbox now and attend to the snails at hand. ☺ Wow, that is some happy dough!  Here is the original recipe and challenge, found at Bake My Day!
Ensaïmadas
(yields about 10 Ensaimadas)
500g all-purpose flour (plus additional as needed)
75g sugar
½ tsp fine sea salt
40g fresh yeast (= 1 cube)
200-250ml lukewarm milk (I scalded my milk because I always seem to get better results that way.)
2 eggs
2 Tbsp olive oil (I used an olive, coconut, sesame oil mix)
150g soft pork lard, bacon grease, or softened butter
powdered sugar for dusting
Add the flour together with sugar and salt into a large bowl and mix well. Make a hollow in the center, add the crumbled yeast as well as a decent pinch of sugar and pour over just enough of the lukewarm milk until the yeast is covered. Stir the yeast milk once or twice, then cover the bowl with a kitchen towel and let rest for about 15 minutes or until the surface of the yeast milk looks bubbly.
Add the other ingredients (the remaining milk, eggs, oil ) and knead well, either by hand or with your kitchen machine until the dough comes together nicely.  Add additional flour as needed to make a soft but cohesive dough.  Rest in a covered bowl again in a warm place for at least 30 minutes or until the dough has doubled.
Punch it down softly, then flip the dough onto a well-floured surface and sprinkle with flour. Cut into about 10 equally sized portions and form into neat little balls.  Sprinkle with flour and let rest, covered with a kitchen towel, once more for at least 30 minutes. 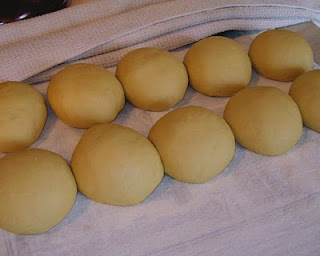 To shape the Ensaïmadas: Flatten one doughball, then roll out with a rolling pin (use flour as needed) until you get a pretty thin dough circle and brush it generously with the softened pork lard (or bacon grease or softened butter). Roll up cautiously, then let rest for a couple of minutes and continue with the other dough balls. (Meanwhile line the baking sheets with either parchment paper or silicone mats.) 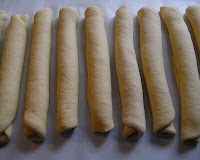 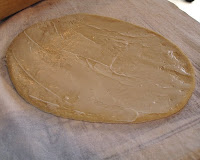 Coil up each dough piece until it resembles the house of a snail (tuck the outer end under), ideally very loosely, because any spaces will fill up as the dough rises further. Place about five Ensaimadas on one baking sheet, making sure to leave enough space between them. Lightly brush with lard and cover up again. 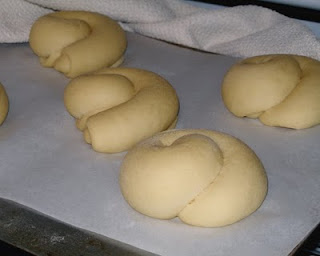 Preheat the oven to 200°C (~390° Fahrenheit) and bake for 14 to 16 minutes or until golden brown. Take out and let them cool down on a wire rack for a couple of minutes, then generously dust with powdered sugar (leave the bacon grease ones plain) and enjoy while still warm. Greasy fingers included! 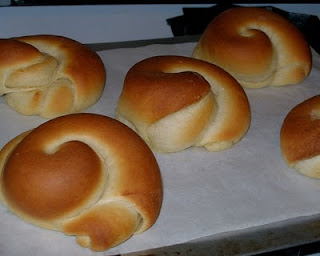 And since these are so light and tender, if you serve them this way, they almost taste like a cream puff: 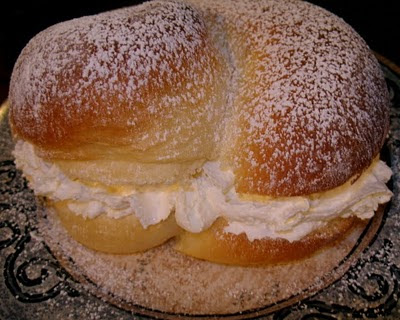 Thanks for the challenge girls.  Yummy!  You know, these turned out well enough that I think I will submit them to yeastspotting. 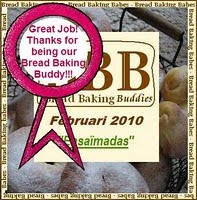