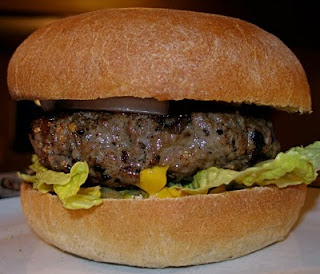 Why buy buns when homemade are so much better...  For most of the girls' lives they have eaten just the middle out of hamburgers.  Sometimes they would try a bite or two, more often there would be the two halves of the bun left on the plate.  In the past year or so it has been more for allergy reasons that R is banned from the bun.  Then there's the waste factor.  Who ever uses the whole package of buns for one family dinner?  Not us.  They either get forgotten on top of the fridge until they mold, or stuck in the freezer where they turn into little dry hockey pucks.  Into the compost they go, six months to a year later...  I really dislike waste.  It seriously bugs me.  Which might be considered odd since I am definitely not the sparkling clean housekeeper.  You'd think I wouldn't mind.  No accounting for quirks I guess.

At any rate, after those lovely ensaïmadas we made last week for the Bread Baking Buddy challenge, I got to thinking about hamburger buns.  Picked up some beautiful 16% fat grass fed hamburger - yes, expensive - at Whole Foods.  I don't believe I will ever go back to the lean stuff!  Those burgers were awesome!  Nothing like a little (totally good for you if pastured) saturated animal fat.  Then I went and dug out the recipe for burger buns that I bookmarked a year ago.  Now granted, you do need to plan ahead just a little bit to have the buns done in time for dinner.  I take advantage of the dough cycle on my bread machine.  (That's all I ever use on it anyway.)  It's still only ten or fifteen minutes hands on time.  Granted, I am a stay at home mom with the "luxury" of more flexible meal prep times.  A working person might have to make these on a weekend.  We will find out how well they freeze later on as I did make the full batch of eight buns this time.  I did not slice them; I think they will last better frozen whole:  less moisture loss.  Next time I may work on getting the same result without an egg in the dough, but since that is not a severe allergy for R, I decided to allow the one egg this time.  I'll probably try a little flaxseed meal and/or maybe some milk or cream and extra butter.  The nice thing is, without the egg, the recipe will be much easier to scale down.  But that's for next time.  Here is the recipe for this time:


Mix and knead all of the dough ingredients - by hand, mixer, or bread machine - Use additional flour if necessary to make a soft, smooth dough.  Cover the dough, and let it rise for 1 hour, or until it's doubled in bulk.  (This is a happy dough, it may double earlier.)  Gently deflate the dough, and divide it into 8 pieces. Shape each piece into a round 1" thick (more or less); flatten to about 3" across. Place the buns on a lightly greased or parchment lined baking sheet, cover and let rise for about an hour, until very puffy.  If desired, brush buns with melted butter.  If you want to add sesame seeds you will need to use an egg wash to make them stick.  Bake the buns in a preheated 375°F oven for 12 to 15 minutes, till golden.  Cool on a rack.

Normally I would be obsessive and use my scale to make perfectly equal divisions for the buns, but in this case it works nicely to just eyeball it because the smaller ones are good for the kids and the larger ones are fine for Daddy.  These buns were super tasty.  For us parents, the perfect marriage of bread and burger.  The girls, used to leaving the bun off, didn't eat all of it, but did try them and gave a positive verdict.  The hubby chomped, scarumpfed, grunted, nodded and said, "Oh yeah, definitely."  Now if I could just find a corn free hotdog, these would make great buns for that too.  Oh, for the burgers themselves, I just added some fresh minced onion and a dash of steak seasoning.  With that nice fat content, you hardly need any seasoning at all.  I was going to BBQ them but hubby had to work late so I just fried them up in the cast iron pan.  It worked great!  The little bits of onion caramelized and made it so juicy and flavorful.  Mmmmmmmm.  I love caramelized onions...  Even for the girls there were no scraps of burger left over.  This one's a keeper for us.

Update:  It's been almost a month in the freezer and tonight I made hamburgers for dinner and company.  They thawed beautifully and tasted fabulous.  Just like fresh.  I just took them out a few hours before dinner and let them thaw in their bread bag.  Nana, who doesn't usually like hamburger buns, finished every last crumb of hers and said she now understood why I would never buy buns again!  She took home the last bun for my Dad and made him a salmon burger the next day.  He agreed they were infinitely superior to store bought.  Tender, yet substantial enough to hold up to the filling/burger.
at February 27, 2010