If you're like me, you have a recipe box overflowing with cards, clippings, bookmarks and sundry.  I have decades of recipes sitting in my box and folder that have never been tried.  And don't even start thinking about the masses of cookbooks with bookmarked pages...  So I am going to start going through them and deciding which are actually worth keeping.  And why not start with the dessert section I ask?  Simple.  Do.  I am foremost a baker at heart after all.  So I pulled out a few that I had received and/or clipped over ten years ago and started there.  Well, I did pull out one of Grandma's beloved recipes just to make me feel good too, but I'll make that one another day.  I already know it's a keeper.
So I found two cookie recipes.  One I received as a wedding shower collection card and one I had clipped from a magazine.  Both different takes on shortbread.  Nice thing about shortbread cookies and crusts is that they are generally egg free already.  Good for those with allergies.  The wedding recipe was called Fluffy Shortbread Cookies.  I just made them plain as directed on the card. 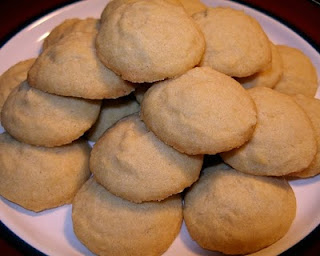 Now that I have made them, I see that they are basically a version of what is also known as a meltaway cookie.  The starch is what helps with that.  Very rich but not too sweet.  This kind of recipe is so versatile; you can flavor it, frost it, add sprinkles, anything you like.  Flavored frosting makes these almost like little bon bons.  This one stays in the box.
Fluffy Shortbread Cookies
1 pound butter, softened  :)
1 cup sifted powdered sugar (I use powdered sugar made with tapioca, not corn starch)
½ cup corn tapioca starch

3 cups flour (of course I used part white whole wheat and they still melted away)
1 tsp vanilla
¼ tsp salt
Cream the butter.  Add sugar slowly, then starch, vanilla and salt.  Last: add flour.  Beat until it looks like whipped cream.  Drop by teaspoon onto cookie sheet.  Bake at 325º for 18 minutes.

The other recipe was a chocolate shortbread.  It looked good, came together fairly easily and it's growing on me as I nibble one of the broken pieces.  I even got all fancy schmancy and fluted the edges.  It probably needs to age a bit.  Still, I am not impressed enough to make it again or keep the recipe.  I think I would prefer my shortbread dipped in chocolate rather than baked as chocolate.  At any rate, into the recycle it goes.  Two down.  Countless to go...