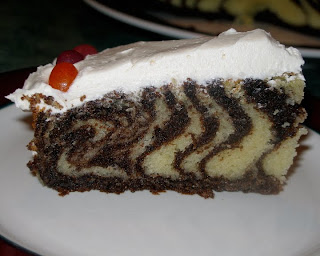 I admit it.  I decided to try the King Arthur Zebra cake for my daughter's birthday cake mostly because it looked impressive.  That's how mine turned out above.  (Sorry about the smudge - little girl fingers seem to find their way to the camera lens quite often.)  And here's how the KA picture looks: 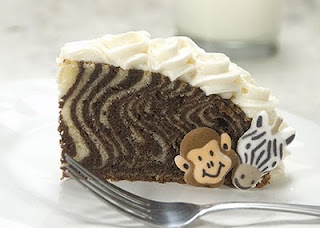 They got more stripes and loft than I did, but I wanted my vanilla stripes to be more prominant anyway so I changed the ratio of layering.  I think it looks pretty cool even so.  We had a little family birthday and her larger party for friends was four days later.  So I tried out the zebra cake on ours and let her decorate it as she pleased.  I think she liked that more than anything.  Glad I tried it out on us first though.  Let me tell you one little thing about the recipe.  Twice the wet ingredients to dry ingredients ratio.  Apparently necessary to obtain the cool stripey effect.  The batter must be quite thin.  Do you see how shiny the cake looks on my picture?  Well, it pretty much tasted that shiny too.  A cup of oil, cup of milk and 4 eggs with only two cups of flour makes for a fairly dense cake.  It was also lacking in flavor, even though I used coconut oil and that flavor came through.  I also added a couple drops of buttery sweet dough flavor and used the special double dutch dark cocoa for the chocolate.  No dice.  It would remain a bland cake.  Fortunately, the ethereal buttercream I used, (thank you Cook's Illustrated!), was enough to carry the cake as long as the pieces were small.  Maybe coconut oil is part of the reason it was so dense but I know other reviewers have been put off by the oily, heavy texture.  It is possible using part melted butter might help boost the flavor but I will leave that experiment to others.  For textural reasons alone, I will not be coming back to this one.  Sorry King Arthur, it's one of the few that haven't made the cut for me.  I ended up using a Fluffy Yellow Cake recipe (also from Cook's illustrated) for the party and it turned out FABULOUS.  It will be my go to yellow cake recipe from now on.  I'll post those results later, along with how to make way too much stuff for a six year old's party.  ☺
at June 08, 2010