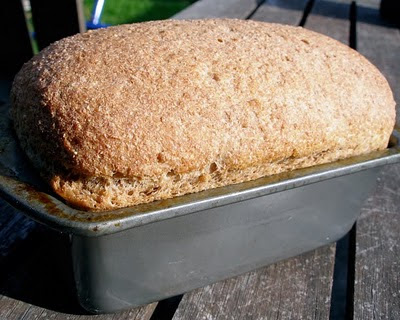 Well if you want to stretch your baking horizons, the Babes sure did deliver this month.  (And quite literally in the case of the host kitchen's daughter - congratulations dear, you are THE Babe of the month!)  The challenge was to create a loaf with five simple ingredients:  whole wheat berries, water, yeast, honey, salt.  NO FLOUR.  I just happened to have a bag of hard red wheat in the pantry that needed using.  ☺  I thought how cool, this could be fun...  Stop snickering.  So I started soaking that very day.  I have learned one important piece of information from this endeavor.  Two actually.  One, sprouting is easier than I had imagined.  And two, I am in serious need want NEED of a better food processor.  Or at least in need of a much sharper blade.  I don't know, the thing is over 11 years old and has served adequately.  I know that you can also do this recipe with a meat grinder, but I have neither the Kitchen Aid attachment nor a hand grinder.  Old food processor, here we go.  I guess I never felt pressed enough to shell out for a super expensive one, since the old one was adequate for most tasks.  I say most tasks because in this case it was very difficult impossible to get the grain broken down to a reasonable size even with extended processing.

.  Wow.  Processing time went from 15-20 minutes, to probably 5 total.  I think I can say that the state of your blades makes a HUGE impact on the consistancy of the dough.  I know now that my old machine simply couldn't break down the grain well enough to release enough gluten to be able to support such a heavy loaf.  I had to add at least a quarter cup more water just to get the first attempt to come together into a dough.  Not so with the new machine.  I got a beautiful sticky, gluteny dough in just minutes.

I let the berries get this sprouted before I stuck them in the fridge.  Because I keep my fridge quite chilly, they didn't really do much more.  A tiny bit.  And now that I think about it, the second attempt was just slightly more sprouted than that.  The berries still tasted starchy though and not sweet, so I know we hadn't gotten to the malt stage yet. 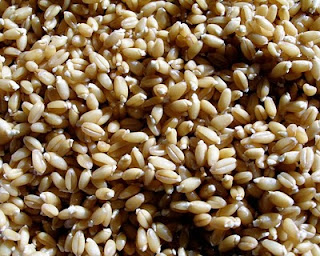 Dough try #1:  you can see the gluten that is trying to work on a loaf of basically cracked wheat.  That was after processing for around 15 minutes, then deciding it needed some more and processing another three or four to try to break down that poor grain. 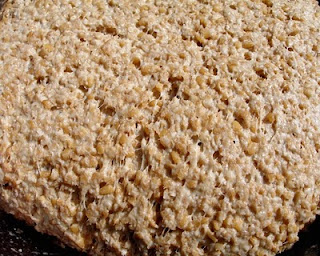 Dough try #2:  now that's an acceptable dough.  It came together in less than five minutes including multiple pauses to scrape it down.  I could knead it by hand and have it feel like a sturdy whole grain dough.  Like the little belly button?  It's ready... ☺ 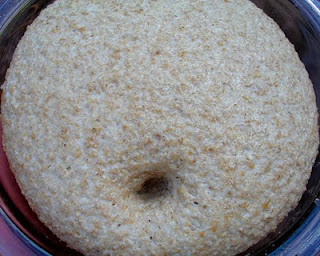 So I crossed my fingers, loafed it up and baked it off.  Well, I did let it raise first.  I also decided to start it in an oven only partially preheated, hoping that the initial lower temp would let it have more oven spring.  It did well enough.  Truth be told, I should probably have baked it for 5 more minutes.  Still, this one the kids were willing to eat!  And they are bread spoiled.  I don't know if I'll do this one again.  I think I'll sprout the wheat, dry it, and turn it into flour as originally planned.  But it sure was an interesting recipe! 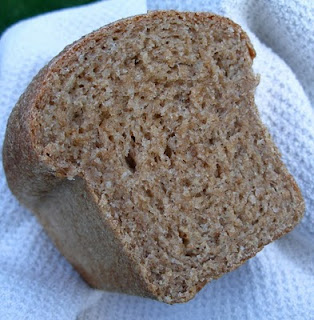 Well a recipe this unique deserves to be Yeastspotted.

Ah yes, the recipe would be helpful, eh?

To sprout the wheat:

Rinse the grain and cover with tepid water, letting it stand 12 to 18 hours at room temperature. Allow the longer period in cooler weather, the shorter period in warm.

Drain off the liquid, rinse the grain with fresh, tepid water, and store in a dark place with a damp cloth over the top of the container. Rinse at least every 12 hours, just until the tiny sprout is barely beginning to show and the grain itself is tender – about 48 hours, then refrigerate until they are cool, overnight or longer, but not more than a day or two.

To make the loaf:

Dissolve the yeast in the warm water.

Put the regular cutting blade into a standard-size food processor and measure just over 2 cups of the sprouted wheat, a third of the total, into the bowl. Pour about 2 tsp of the dissolved yeast liquid, a scant Tbsp of honey, and about 2/3 tsp of salt over the wheat in the bowl. To protect the yeast, use separate measuring spoons for each of the ingredients.

Process until the ground wheat forms a ball, about one minute. Scrape the sides of the bowl, and process about two more minutes. Stop processing before the ball completely falls apart; if your wheat is not exceptionally high in protein a minute and a half might be all it can handle. If it falls apart, check the time, and with the next two batches, stop a little sooner.

Repeat with the remaining two-thirds of the ingredients, in two batches. Knead the three dough balls together.

Form the dough into a ball and place it smooth side up in the bowl. Cover and keep in a warm draft-free place. After about an hour and a half, gently poke the center of the dough about 1/2 inch deep with your wet finger. If the hole doesn’t fill in at all or if the dough sighs, it is ready for the next step.

Press flat, form into a smooth round, and let the dough rise once more as before. If the dough is cold, the first rise will be fairly slow, but as the dough warms up, the rising will telescope.

Gently knead into a round. Use water on your hands to prevent sticking, and keep the ball as smooth as possible. Let it rest until it regains its suppleness while you grease a standard 8 x 4-inch loaf pan, pie tin, or a cookie sheet.

Deflate the dough and shape into a loaf. Place the dough into the greased loaf pan and let rise in a warm, draft-free place until the dough slowly returns a gently made fingerprint. Bake about an hour at 350 deg. F, though if your bread rises very high, it will take less than that. 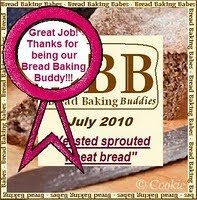 Okay, if I must show the original result with my poor old dull as a butter knife food processor.  Here it is... 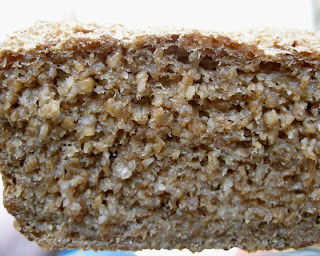