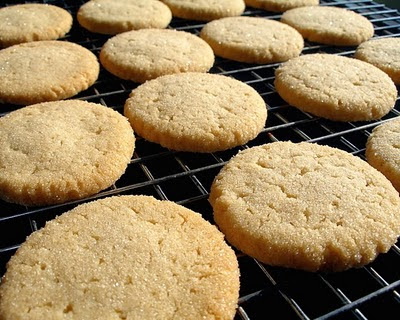 These cookies are beyond fabulous.  They are super crispy and yet still manage to melt in your mouth.  I had a memory of sugar cookies my mom used to make when I was little.  Super sugar cookies they were called and super tender and crispy crumbly they were.  Yet when I dug up the old recipe and tried it out, I ended up with an oily mess.  Such a disappointment.  I still don't know what went wrong with those, but this new recipe is everything that my memory said those others should have been.  They have a delightfully porous interior and unbelievable storage life.  Seriously, a few got hidden in a ziploc bag on top of the fridge and forgotten for a month or two.  They were still crispy and delicious when finally discovered!  I don't know, maybe that's not a good thing, but they usually don't last that long.  My Dad has taken to calling them "pneumonia" cookies in jest of the secret ingredient; when I ask him what he wants for Christmas or his birthday, a batch of these cookies is now his answer.  Just mentioning that I might happen to have some hidden away in the freezer makes his eyes brighten up.  The secret ingredient is a very old one and some people may be thinking, well gee, I've known about that for a long time.  "Grandma used to make those..."  Well the ingredient is baker's ammonia.  (Ammonium bicarbonate, baking ammonia, hartshorn, etc...)  It was a leavening agent before baking powder and soda came into use in the 1850s.  You can get it in cakes in drugstores and pharmacies and even craft shops, but I got mine in pre-powdered form from King Arthur.  Easier to deal with and you don't really want to be dealing with it too long at one time.  I think it's the equivalent of smelling salts.  So if you go out and get some, don't go opening it up and sticking your nose in to try out your new cool ingredient.  You'll get knocked on your tuckus.  You also will want to keep the container sealed very well or your special ingredient will simply evaporate over time.
Incidentally, these are really good as 50% white whole wheat cookies as well, and that is how I normally make them.  For a real indulgence though, I will make them with just all purpose flour.  I will have to try the ammonia out in some cracker recipes.  We have a local company called Beecher's that makes the absolute most fabulous crackers.  I could sit down with a package of their plain crackers and a container of Boursin and be happy all day.  I'd love to recreate those.  Mmmmm.  Very addictive.  Nuts, I'm out.  Booo.  Ah well, back to the cookies.  I've tried this recipe with directions that have you dissolve the ammonia in liquid and directions that just put it in straight.  I would recommend dissolving in the vanilla.  It greatly lessens the ammonia smell in the dough and there is no discernable difference in the finished product.  Which, by the way, will have no ammonia smell whatsoever.  As a matter of fact you can tell when it has baked off and the cookies are ready to come out as the kitchen smells wonderful then.  ☺

2½ tsp good vanilla
½ - ¾ tsp baker's ammonia (you can use ½ tsp for the first try just to get a feel for it, recipes differ and you may be happy with the crispiness of the smaller amount.  I use the larger amount and some traditional recipes use even more.)
½ tsp sea salt
1 ¼ cups sugar
1 cup butter, softened
2 cups flour
sugar for coating

Preheat the oven to 300° F.   Line two baking sheets with parchment.  Combine the vanilla, baker's ammonia, and salt in a small bowl. Stir to dissolve the ammonia. Combine the vanilla mixture with the butter and sugar, and beat till smooth.  Add the flour gradually.  It will be dry and crumbly at first but it will come together after a while.  Use a small spoon or cookie scoop to portion the dough into small balls.  (I use a #70 cookie scoop which is probably around 2½ tsp of dough.)  Roll the balls in your hand until smooth and then in a bowl of granulated sugar until coated.  Place on the prepared baking sheets.  Flatten slightly with a glass dipped in sugar.  The cookies will spread a little but not too much.  Bake until the cookies are a very light golden brown around the edges, about 20-25 minutes depending on your oven.  Remove from the oven and place on a rack to cool.

You can skip rolling in the sugar if you prefer a slighly less sweet cookie, but I think it gives them a nice crunch and sparkle.  I use evaporated cane sugar which is more coarse than granulated white sugar.  It's hard to show just how crisp these get, but you can see somewhat the amazing effect on texture the ammonia has in this picture: 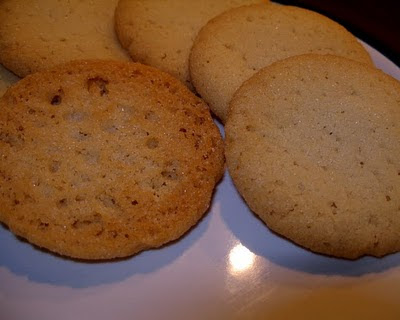 It reminds me of seafoam candy now that I think of it.  And that is one of my very favorite candies.  Man, I need to get to Cannon Beach this summer...