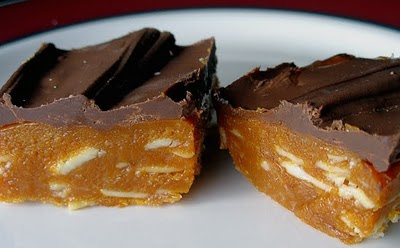 It's interesting how a recipe sometimes turns out completely different than you expected, but you end up liking it anyway.  When I found the original recipe I was looking for something to use up some coconut butter I had on hand.  I assumed it would turn out like an english toffee.  That is, something crunchy.  Silly me, the recipe did call them caramels and not toffee.  But though it was not what I expected, I found myself going back and eating way too many of them.  My daughters loved them too.  I will possibly make this instead of my homemade bit 'o honey candies when those run out for the girls.  (Those were just a mistake, I don't know if I could recreate them anyway.  May have to try though since they are an oft requested treat.)
Don't use an expensive raw honey for these since you'll be cooking the heck out of it anyway.  I recommend a light honey like clover or wildflower honey.  I used raspberry honey which is actually pretty strong.  For candy though, which concentrates the flavor, I'd go lighter unless you really love honey.  We do as it happens.  We're even fortunate enough to have a source of raw fresh honey from Nana's house.  I'd never use that for cooking or baking though.  It's strictly an eating honey.
Now this candy, though it is a candy and therefore to be eaten in moderation, is happily made from more healthful ingredients than your typical "turtle".  No nasty corn syrup here.  Sorry, having a daughter with a pronounced corn allergy has changed my world.  You just try finding a food with more than five ingredients that does not contain hidden corn or soy.  Hey, candy making is fun though!  I even made homemade candy corn last Halloween!  (Another fabulous use for "marshmallow syrup" which is a homemade invert syrup to use instead of corn syrup.)  Get the book, you won't regret it!  If you enjoy honey though, you may want to give this one a try.  They are creamy crunchy and have that lovely honey tang.
Honey Almond Caramel Bars   (Honey Caramels With Chocolate, Almond and Coconut)
1 cup whipping cream
1 cup honey
½ tsp salt
1 tsp vanilla
½ cup coconut butter (a.k.a. coconut cream concentrate)
¾ cup sliced almonds
¼ cup shredded, unsweetened coconut

Over medium heat in a large saucepan, heat honey, cream, coconut butter, vanilla and salt.  Stir constantly using a whisk.  The mixture will be quick to boil - you want it to bubble lightly.  Continue to stir until mixture reaches about 260 degrees.  Turn off the heat and stir in almonds and coconut.  Grease well an 8x8" pan or line with greased foil.  Pour in the caramel mixture and spread out.  Sprinkle chocolate chips on top and let sit for a few minutes.  The chips will quickly melt and then can be spread evenly over the caramel.  Allow to cool or put in refrigerator to cool faster.  Once cool, cut into little squares and place on wax paper.  Or just leave in pan and take them out as you want.

Makes 9-16 bars depending on your level of self control...

Adapted from healthytastychow.com
at August 01, 2010