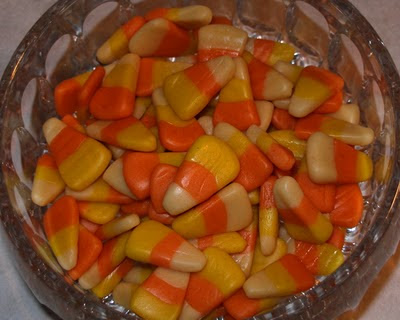 Update:  For the most reliable recipe I have tried yet, check out my 2012 candy corn batch.

This time of year I have a lot of specialty cooking to do.  It's rough on your kid when the only thing okay for them to have is a chocolate bar and all the trick-or-treating candies are full of corn syrup and dextrose.﻿  We actually fill our candy bucket with the little mini playdoh pots and they are quite popular.  (Who doesn't like playdoh?)  So last year I tried my hand at candy corn.  There are many recipes out there, all about the same.  It's a very touchy candy, very dependent on temperature and dry ingredients for good texture, and very humidity sensitive.  I'd put it right up there with divinity for being a persnickity confection.  It is so worth it though to have the ultimate Halloween candy accessible for my daughter.  And she loves it.  Bless her heart, she loved all the failures too!  Last year, I think I did two half batches, both of which were too firm.  The first used honey and Lyle's I think and the second I used marshmallow syrup

.  (That's a homemade invert syrup made with cane sugar.)  Here's how they turned out last year; I did manage to form single kernels of each color by microwaving the dough to get it soft enough.  But it wasn't pliable enough to make three color ropes.  R was still thrilled. 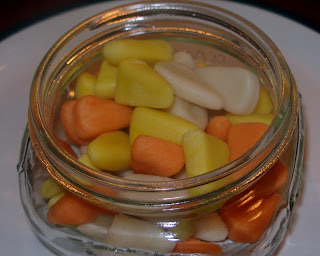 Last year, I actually only found one recipe that used candy temps.  The rest used timing.  Very unreliable, as no base heat was indicated and stoves vary tremendously.  Boil for 5 minutes over low?  Goop.  Boil for 5 minutes over medium, too firm.  Medium high, you get Bit-O-Honey.  (At least that batch, made with half  honey turned out to be a fabulous candy in and of itself.)  Medium low, you might get what you're looking for.  I highly recommend a candy thermometer.  It also makes a difference how you measure your sugar.  Too much and even if you got your temp right, it will crumble on you.  I noticed that Alton Brown had a new episode of Good Eats last night that made candy corn and he had both temps and weights for ingredients listed.  Nice.  People still had varying results.  Another thing I recommend getting is the non instant kind of dry milk powder.  It is a fine powder just like the powdered sugar and you won't have little bits of undissolved instant milk in your candy.  The end crystalline structure will be much better, finer and closer to storebought.  Oh yes, SIFT your sugar.  Lumps are not your friend here and are difficult to work out.  Plus, the milk needs to be mixed thorougly into the sugar for even distribution.  I ended up with two batches this year.  One where I measured the sugar into level cups while it was still lumpy. 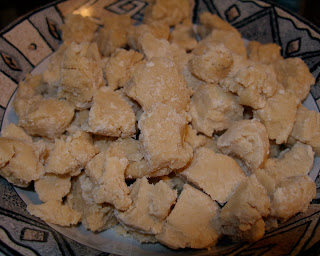 As you can see, even though I got the temperature of my syrup correct, I think there was too much sugar and it turned to something close to maple sugar candy.  Fortunately the girls and I happen to love maple sugar candy.  ☺  I used half maple syrup because of the very fine crystalline structure it gives.  It really messes with the temperature you are aiming for though, because the boiling point is so much lower.  I couldn't even get my sugar to completely dissolve before I reached max temp.  Evaporated cane sugar has a larger crystal than refined white sugar and takes longer to dissolve.  It also tints the candy with a more creamy color, as does the maple syrup and the Lyle's.  If you want the really white tips, used refined sugar and light corn syrup.  I much prefer the flavor of Lyle's Golden syrup, which is made from cane sugar.  It definitely has a golden color to it, but it's easier than making invert syrup from scratch when time is not your ally.  Final try, I used mostly Lyle's and maybe a tablespoon or so of maple syrup for flavor and structure.  I also added a teaspoon of water to help dissolve the sugar and scanted the powdered sugar when measuring it out.  Mine was very lumpy and probably should have been sieved before measuring.  Oh well.  This batch finally worked.  The consistency in the pot after adding the sugar mixture was like caramel frosting.  It firms up after cooling.  The final consistency is like a fondant, modeling chocolate or commercial playdoh.  I used liquid food color.  If this weren't such a special treat, I would avoid the colors or try to find natural colors to have on hand instead.  Artificial dyes sometimes affect my daughter just as much as corn syrup. 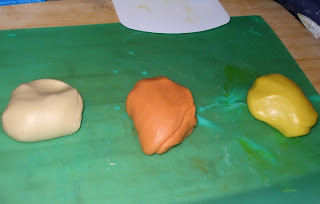 This was a half batch and made a TON of candy.  I haven't even gotten through half the dough yet.  So break out your little kid art skills and start making ropes.  A little goes a long way.  Stick the ropes together and flatten slightly, then cut into triangles.  (Yes, I know I got the order wrong, I fixed it in later roll outs.) 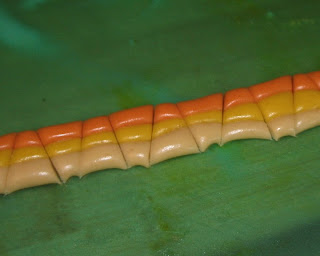 You can leave these as is to dry.  I like to shape mine gently a little further to get a better candy corn shape. 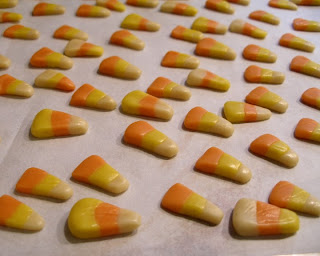 Since these are so affected by humidity, especially depending on just where your candy consistancy lies, I decided to stick them in the dehydrator overnight on the very lowest setting.  Worked like a charm and in the morning, they were very close to storebought consistancy.  They'll still pull moisture like anything though, so airtight containers all the way.  Maybe next time I'll try the marshmallow based recipe since I have marshmallows still in the freezer.  (Homemade marshmallows freeze!  Isn't that cool?)  I'll bet I could turn the strawberry marshmallows into Valentine's candy corn...

And now, if I haven't completely scared you away from ever trying it:  Remember, this makes a TON of candy; I highly recommend a half batch.

I recommend whirling the dry milk in a spice grinder or food processor to get a fine powder and better consistency if it is the granular instant milk powder.

Sift together the powdered sugar, dry milk and salt in a medium bowl and set aside.  In a heavy bottomed pan, bring the granulated sugar, corn or golden syrup, butter and vanilla to a boil over medium heat.  When bubbles start to form, reduce heat and stir frequently with a wooden spoon or silicone spatula until a candy thermometer reads 225-230ºF.  That's just before thread stage.

Remove the pan from heat and gradually stir in the powdered sugar mixture until fully incorporated.  Make sure there are no lumps.  Let mixture cool about 20 minutes until still slightly warm.  (Or at least not unbearably hot.)  Divide dough into three equal pieces.  Make a dent in two of the pieces and add four drops of yellow food coloring to one and the recommended combination of red and yellow on the box for orange to the other.  (That was three red two yellow for me and I ended up adding another two red and one yellow to increase the color a bit.)  Fold the sides into the center and keep doing so until the color is evenly distributed throughout the dough.  You should use food gloves, an apron or old clothes and a silicone mat/parchnment/waxed paper if you want to avoid staining things with the color.

Pinch off a small piece about the size of a superball, (smaller than a golfball if you don't have a very long counter space), and roll each color into a long rope.  Push the three ropes together, trim the ends even, and cut into triangle shapes down the line.  Place the candies on parchment or waxed paper to dry.  Store in tightly sealed containers at room temperature.  Separate layers with waxed paper or parchment.

Makes up to 200 pieces depending on how thin you roll the ropes.

(If your candy seems a little tacky, the dehydrator trick worked for me.  Lowest setting was 95ºF and I left them in overnight.)

If your candy sets up while it is cooling, your temperature probably got too high.  It's still tasty though.  Break it into pieces and store in an airtight container.  (This happens to me at least one batch a year.)
If it won't hold a shape the temp was too low, you might be able to knead in some more powdered sugar mixture to fix that.  (It will also firm up a bit as it cools, give it some more time.)
at October 30, 2010