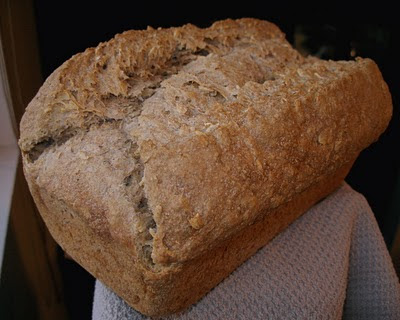 I was keen on trying this spelt bread out because I figured it would go over well with my youngest daughter and I had some spelt flour in the freezer to use up.  When I looked at it though, it was white spelt flour which I believe is refined just like all purpose flour.  It certainly didn't look like a whole grain flour.  I just remember picking it up in the bulk section at Whole Foods a long time ago.  So I picked up a bag of whole spelt flour at the little health food store where I get my milk and local eggs.  Very fresh and not too expensive; just $3.19 for about 28½oz.  Enough for two loaves.  Perfect.

I was kind of surprised that I got such a round loaf since most of the BBBabes had flatter loaves.  The one biggest difference in mine I think was that I made a half batch but forgot to halve the milk.  So I did end up adding some more flour while kneading.  Maybe that helped out the structure since spelt has more delicate gluten than regular wheat.  It still wanted to spread a bit more than rise but I made my center cut a bit deep so it really split when it went in the oven!  Came out with a nice loaf though.  And this bread has the most amazing aroma and flavor.  Very complex with a hint of natural sweetness and "nuttiness" for lack of a better word, and a tiny hint of tang from the lemon juice.  And it smells fabulous when toasting.

I recommend a smaller loaf pan (8½x4½") to help give the spelt a boost in structure.  I used scalded milk cooled to lukewarm because I love the flavor and think it contributes to a better loaf.  And I found 1 tsp instant yeast to be sufficient for one loaf - a half batch.  My sponge never came together like the "cannonball" in Astrid's original post.  Even with double milk.  It looked like streusel topping.  During my short research on spelt flour I found that you should bring the dough together within 4 minutes of adding the liquids to protect the gluten structure, but once it is combined you may treat it like regular wheat dough.  I don't know if I hit those guidelines but I did end up adding another probably ¾c flour during kneading to deal with the extra liquid I added at the beginning.  I have a feeling that helped with the structure and rise.  Spelt seems to be particularly sensitive to moisture content.  Its gluten cannot handle over hydration.  Anyway, check out the original post at Paulchen's FoodBlog?!  for some great info and history on spelt and the recipe, and the links to the other BBB members to check out how their loaves turned out. 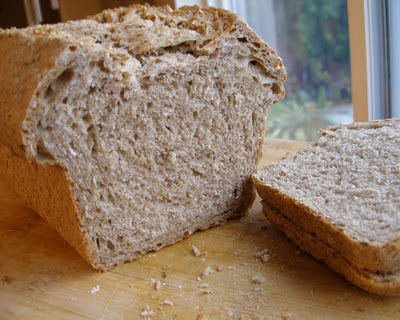 Sponge:  Mix spelt flakes and spelt flour with the salt. Dissolve yeast in milk and combine everything to a sponge. Cover the bowl with a kitchen towel and let rest for about 15-20 minutes. Add water and lemon juice to the sponge and knead for at least 15 minutes gradually adding the sunflower oil.

Dough: Form dough ball and coat with warm water. Cover again with kitchen towel and let double in size. Knead for another 2-3 minutes.

Cut dough in 2 equal halves and place each in a baking pan. Cut the surface of both breads about 5 mm deep and let rise again until doubled in size.

Astrid’s Notes:
- The longer you knead the dough, the more air will be incorporated - but be careful not to overknead the dough!
- you can also soak the spelt flakes in the lukewarm milk a while before you assemble the sponge - if you prefer...
- Also: be careful that the dough will not overrise, especially at the last rising step. Spelt loves to overrise if you are not careful enough... at least it does that to me ;)
- It's recommended to place a bowl with water into the oven for the first 15 minutes of baking.
- You can also brush the finished bread with some milk and let dry for about 1 minute in the oven.

This loaf will be yeastspotted! 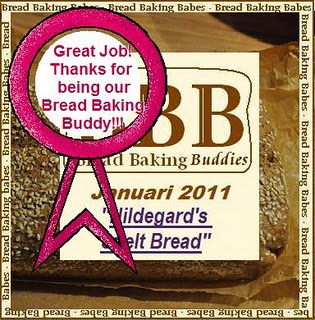