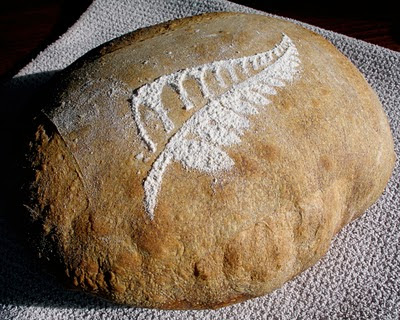 Boy am I glad the BBB loaf turned out for this month, because I ended up having to finish it at a friend's house.  But then we got to munch on the tasty results before dinner!  Check out Notitie van Lien for the original post and challenge.  I think the most difficult part of the recipe was cutting out that darned stencil.  ☺  Then I couldn't get it to lay flat, so didn't end up with a nice sharp image.  Oh well.  The bread tastes yummy.  I was a little apprehensive about doing the fermented potato starter after reading some of the Babes' accounts of little black spots in the rewena.  I cooked my spuds (I used a small yellow potato) until quite tender and then pureed them with my immersion blender before adding in the flour.  Then I anxiously watched that thing all day, waiting for the spots to appear.  Fortunately, they did not.  Yay!  And imagine that, a watched starter does indeed ferment.  Look at the bubbles on that baby.  Who knew potatoes were so active. 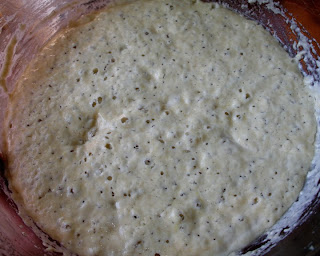 When I brought my dough together, there was so little starter left over, I just threw the extra couple tbsp into the dough.  Figured it couldn't hurt.  It came together very quickly into a firm dough.  I decided to add a couple extra tbsp of water and go more toward a slack dough.  I like soft doughs anyway.  Of course I got all through the kneading and found I'd forgotten the yeast.  *sigh*  Then found out we'd been invited over to friends for a kid (and Daddy) playdate.  The kids got to enjoy that strange yellow orb hanging in the sky for an afternoon, while the Dads sequestered themselves in a dark theatre and killed aliens.  So I quickly kneaded in the yeast, let it sit for half an hour while we got ready, stuck the dough in an oiled bowl and gave it a few folds on itself.  Then the dough got to go for a ride with us.  (When all was said and done, it was pretty soft, I was almost worried I'd gone too far on the water.) 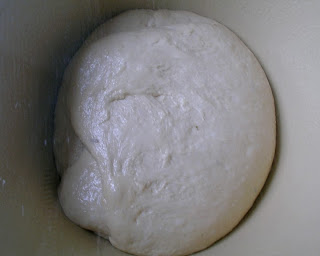 It liked being folded though and behaved very well.  It's one of those nice silky doughs that is just a pleasure to handle.  I gave it until it doubled, then gently turned it out on a floured board, flipped it over and folded under a few times to get the rectangle shape, and stuck it on parchment to proof.  Then I spent the next hour cutting out the stencil.  Did I mention I'm not very good at planning ahead?  After all, I did have two days while the starter was fermenting...  At any rate, I didn't want to over proof, so I gave it about an hour and it looked pretty good.  (Our friends have one of those awesome ovens that you can set for ºF or ºC, so I didn't have to convert. Woohoo!)  Stencil on, slash around the edges, oven ready, slide the dough off the peel... slide the dough off the peel... doggone it, the parchment is sticking to my peel!  Shake... no, don't want to deflate.  Pull the parchment with fingers, trying not to fry myself on the oven or the stone.  Finally managed to get the dough on the stone.  I was afraid I had jiggled it too much.  No worries there, look at the oven spring on that, wow!  Forget my top slashing, it wasn't sufficient and the loaf ripped on the bottom edges to compensate. It occurred to me about two thirds of the way through baking that I should probably have taken the steam out after the first 10 minutes.  Oh well.  It got 20.  The loaf felt very heavy coming out of the oven, but  I needn't have worried.  After it cooled a bit the bread was beautiful and ended up with a remarkably light texture.  Chewy moist interior very like a sourdough, light crispy crust and the scent of the rosemary was very complementary to the potato base.  If you like sourdough, you'll probably like this, and while it takes some planning ahead to make it, you don't have to maintain a starter to get it.  Bonus! 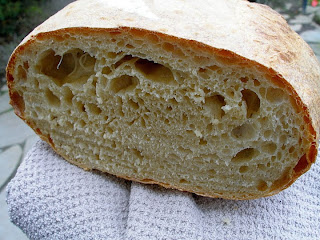 So here is the recipe if you want to try it out.  I think it's worth the wait.  (Hubby took a bite and said, "Wow," if that's any indication of what to expect.)  It seems to be fairly forgiving too since I didn't follow the recipe exactly due to interruptions, oops omissions and traveling.  Still turned out great.  ☺

Dough
400 g strong bread flour (I used all purpose plus a tsp of vital wheat gluten)
1 tsp salt
20 g liquid honey (I ran out and used coconut sugar instead, might cut back next time)
1/4 tsp Instant Yeast
1 1/2 tablespoons fresh rosemary leaves, roughly chopped (I used a few pinches of dried cracked rosemary)
150 ml water
330 g rewena, as above
additional flour, for dusting
4— 5 ice cubes, for creating steam in the oven

To prepare the rewena, place the potato and water into a saucepan and then boil until the potato is soft, leave the lid off. Mash the cooked potato in the water and add extra water until you have 250 g in total. Put into a bowl and cool until lukewarm. If the mashed potatoes are too hot, it will cook the starch in the flour. Mix in the flour and honey to make a soft dough. Cover with plastic wrap and set in a warm place until the dough ferments. After one day you'll see a few bubbles on the surface, after two days a lot. You can use it after two days or up to three, if you leave it longer it'll be over its strongest point.

To make the dough, put all the ingredients into a large mixing bowl and, using a wooden spoon, combine to form a soft dough mass. (You may need to adjust with a little more flour or water.) Knead the dough in the spiral mixer for 8 -10 minutes (starting on speed 1 or 2, halfway on speed 3) until the dough (almost) clears the sides and the dough is smooth and elastic.

Place the dough into a lightly oiled large bowl, cover with plastic wrap and leave in a warm place. Once the dough has almost doubled in size (this will take approximately 1 hour), tip the dough onto the bench dusted with flour and gently knock it back by folding it onto itself three to four times. Return the dough to the lightly oiled bowl, cover with plastic wrap and leave for a further 30 minutes in a warm place.

Fold the dough to form a large rectangle. This doesn't need to be exact, just as long as it's tight and compact. Place on a baking tray lined with non-stick baking paper and cover with plastic wrap. Allow to prove for approximately 60-120 minutes, depending on room temperature.

(optional) Cut a silver fern-leaf or Maori moko design stencil out of stiff paper. Remove the plastic wrap from the dough and place the stencil on the dough's surface (Spray the stencil with pan coating, otherwise it could get stuck on the dough), then with a fine sieve filled with a little (white rye) flour, lightly dust flour over the stencil so you are left with a pattern on the loaf. Carefully remove the stencil. Using a sharp knife or razor blade, cut around the edge of stenciled pattern.

Preheat the oven to 220ºC with a baking tray or baking stone inside (the stone should really be hot!) and a small ovenproof dish on the bottom shelf. Place the loaf in the oven and quickly throw 4-5 ice cubes into the small ovenproof dish and close the oven door.
Bake for 10 minutes, then turn the tray around, reduce the oven temperature to 200°C.  Bake for a further 20-25 minutes, or until the crust is a dark golden brown and the bottom sounds hollow when tapped. Remove from the oven and place on a cooling rack.

(adapted from: “Global Baker” – Dean Brettschneider)
This post will go up for yeastspotting! 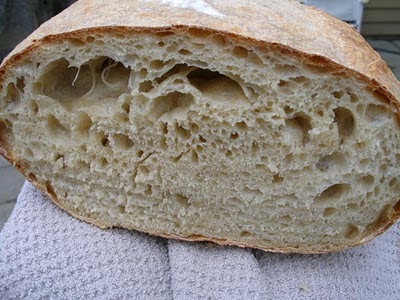 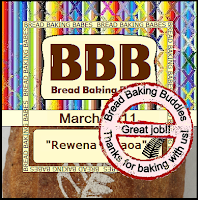