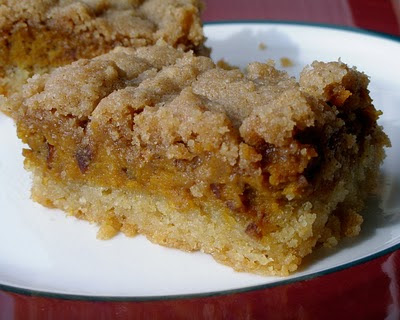 I know, it's kind of a fall recipe, but I had one pie pumpkin left over from the fall that needed to be roasted and turned into something.  So I roasted it, pureed it and turned it into pumpkin butter.  Then I needed to figure out what to do with the pumpkin butter.  (Admission: I have never tasted pumpkin butter before and cobbled together some recipes I found; sweetening more than the first and less than the second, until I liked the result.  My spices ended up simple - cinnamon and a tiny bit of fresh nutmeg with a good strong hit of ginger and a splash of orange juice.)  I have a couple pumpkin dessert recipes sitting in the file that call for a cake mix.  We don't do cake mixes anymore.  Convenient but not on the acceptable food list for DD's allergies.  Plus, I don't want my kids growing up in this generation that seems to think that the "boxed" taste is the norm.  Maybe slightly earlier than when I was a kid, making comments about someone using a boxed mix or bringing a storebought dessert to a gathering would have been considered practically derogatory.  But I also have recipes written in my great grandmother's and grandmothers' handwriting for "World Concern Cake" and other shortcut shortcake type desserts.  They call for cake mixes - as an ingredient.  They were new and innovative at the time I suppose.  A novelty item and a "time saver".  Well now I guess the trick is to be able to get the same or better results without using the chemical laden box mixes.  I had bookmarked a homemade cake mix to try just for such a recipe as this.  While the bar recipe is based on a Williams Sonoma dessert, you are not constrained to buy their specialty pumpkin butter or use a mix.  But you are certainly welcome to.  The homemade version however, came through with flying colors.  These are REALLY good.  Be aware that my results are from a larger portion of pumpkin butter, at least half again as much if not almost twice, than the original calls for.  I like them that way.  They are creamy filled, cakey/chewy on the bottom and crunchy on top.  I suspect they taste like Paula's pumpkin gooey butter cake.  Bonus - the homemade cake mix yields two boxes worth, so I stuck one in the freezer for future use.  The bars are very rich, not overly sweet with the homemade pumpkin butter, and very satisfying.  But you will still want to "even up" those edges...  ☺

Preheat oven to 350º.  Grease and flour a 9x13" pan.  Reserve one cup of cake mix and place the rest in a bowl.  Stir the melted butter and ONE egg into the main portion of cake mix until it forms a cohesive dough.  Press into the bottom of the prepared pan.  (It isn't meant to be quite a short crust, more of a chewy, cakey crust.  So the dough won't be as firm or crumbly as a short crust.) 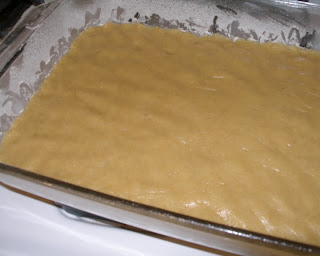 In the same bowl, mix together the pumpkin butter, nuts, milk and the last two eggs until well combined.  Pour and spread pumpkin mixture over the base. 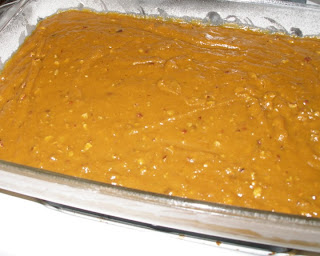 Combine the reserved cup of cake mix with the flour, brown sugar and cinnamon.  Mix in the softened butter with your fingers or a pastry cutter until crumbly.  Sprinkle over the pumpkin layer.  (Try not to get to the pasty stage or it is difficult to sprinkle the topping on the bars.) 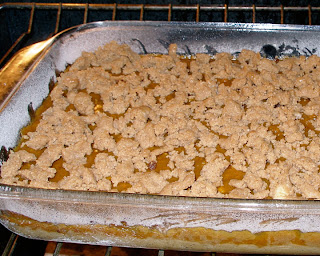 Bake for 35 minutes until golden brown on top.  If you use as much filling as I did there may be a slight jiggle in the middle, but it should still be fairly set.  Cool and cut into squares.  (If you can wait, this is really good warm too!) 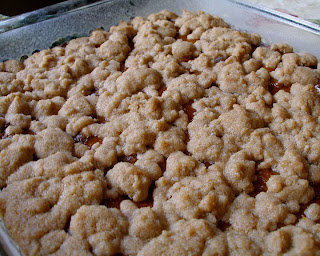 I think this would be fabulous warm or cool with whipped cream or ice cream.  We've been eating it plain and loving it.

4½ cups all purpose flour (I used up the last ~2 cups of my whole wheat pastry flour and sifted out as much bran as I could, then finished with ap flour)
½ cup tapioca starch (or cornstarch if corn is not an issue)
2½ cups sugar (I used organic evaporated cane sugar)
2 tbsp baking powder
1 tbsp salt (I used a slightly scant tbsp sea salt)
1 cup shortening (or butter)  (I used half butter, half unhydrogenated shortening)
1 tbsp double strength vanilla


Combine the dry ingredients in a stand mixer on low.  Add the shortening/butter in bits and combine on low until a fine meal is achieved.  Drizzle in vanilla while mixer is running and combine well.  You could also use a food processor to make this or cut in the fat by hand and run it through a flour sifter to get a fine meal.


Makes about 9 cups mix.  4½ cups is one box mix.  I divided mine by weight and got 24.5 oz each.  I believe the butter is heavier than the shortening as well as the less refined sugar than its white counterpart.  Since I used part butter, I am keeping the other mix in the freezer.  (Shortening for tenderness and butter for flavor in a cake.)  Using all shortening would be shelf stable for maybe a month or so.  According to the author, you can flavor this with oil flavorings as well as citrus zests and it mixes up exactly like a storebought mix with the 3 eggs, 1/3 cup oil and 1 1/3 cups water.


While I haven't tried it as an actual cake, I am extremely pleased with the results in a recipe calling for a box mix.
at March 09, 2011