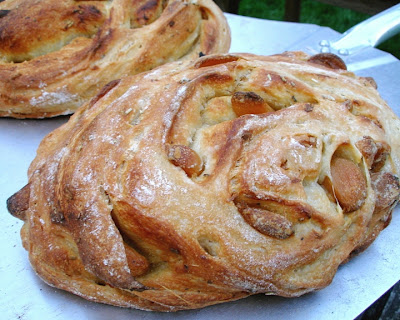 Wow.  That is some garlic bread.  If you are a garlic and garlic bread fan, this is the bread for you.  Heck, make just the filling to spread on crostini if you have to, it's seriously yummy.  This was quite the challenge as it calls for 3 heads of garlic!  (It was also a challenge in that I needed to clear 30cm of space on my counter-top.  Are you kidding me?  I named my blog for a very good reason.)  See the original post at Living in the Kitchen with Puppies to bake along.  You've got til the 29th...  Go with the garlic my friend.  It's a thing of beauty.


This turned out to be a brain duster for me as I got it into my head that I needed a certain protein content in my flour and I actually broke out the algebra to figure out how much regular flour and how much gluten to use to reach that number.  (Setting up and solving two variable equations is just as annoying as I remember.)  I found out later I should have probably gone pastry flour instead of gluten, but it still turned out great.  And hey, I used algebra in real life!  It probably would have been much easier to stretch and pin out with the softer flour added in though.  But maybe it doesn't even matter as I think most of the babes used AP flour and still raved about it.  Another cool thing about this bread is that it is practically no knead.  I mean there's about 30 seconds of light kneading involved.  Just a series of stretches and a couple folds and voilà!  Garlic breath.

for the pre-ferment
To easily get the temperature of the water roughly correct measure 100ml of boiling water and add 200ml cold water, then measure the amount you need from this. Stir in the yeast then, when dissolved, stir in the flour until evenly combined.

Leave the mixture covered at about 20C - 22C (warmish room temperature) for 2 hours, stirring the ferment once after an hour to bring the yeast in contact with new starch to ferment.

for the garlic filling
Break the heads of garlic into cloves and place in a saucepan, cover with boiling water from the kettle and simmer for 3 - 4 minutes.

Then strain the garlic from the water, cover the cloves with cold water to cool then peel the silvery skin from the garlic. It's surprising how few cloves you get after peeling so don't be alarmed if "3 heads of garlic" sound like way too much.

Heat the olive oil in a frying pan then place the add the cloves to it and cook until they are lightly brown (not burnt) on the outside. If you burn the garlic the flavor is nasty and you will have to start again, or serve it to your friends with a straight face, so watch them carefully.

Measure the balsamic and the water then add this to the pan with the sugar, salt, pepper and rosemary. Simmer for 5 minutes until the liquid has reduced to a thick caramel.

Scrape into a bowl and leave to cool. The garlic cloves should be tender when pierced with a knife. 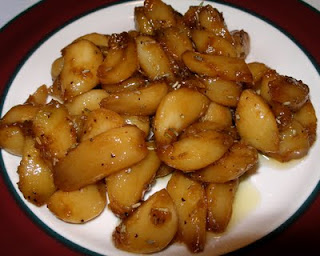 back to the dough:
After 2 hours the pre-ferment should have doubled and look bubbly on the surface. Measure the water into a bowl and tip the pre-ferment into it. Break it up with your fingers until only small thread-like bits remain (this is the elastic gluten you can feel in your fingers)

Add the flour and salt then stir the mixture together with your hands. It will feel very sticky and elastic. Scrape any remaining dough from your hands, cover the bowl and leave for 10 minutes so that the flour has time to absorb moisture before being kneaded. Be sure to scrape around the bowl to make sure all of the flour is incorporated into the dough.

Rotate the bowl as you do this, so that all of the dough gets pulled and stretched. You'll find that the dough starts to feel and look smoother. Leave the dough in a ball, cover and leave for 10 minutes.

Repeat the pulling and stretching of the dough, for no more than about 10 - 12 seconds. You may find that an oiling piece of dough breaks through the upper surface. This isn't a bad thing, but it is a sign to stop working the dough. Cover the bowl again and leave for a further 10 minutes.

This time oil a piece of the worksurface about 30 cm in diameter. Oil your hands, pick the dough out of the bowl, place it on the oiled surface and knead it gently for 10 - 15 seconds. Return the dough to the bowl, cover and leave for 30 minutes.

Uncover the dough, oil the worksurface once more and flip the dough out onto it.

Stretch the dough out into a rectangle, then fold the right hand side in by a third.

Then fold the ends in by thirds again so that your left with a square dough parcel. Place this back in the bowl, cover and leave for 30 minutes.

Lightly oil the worksurface again and stretch the dough out to cover an area roughly 30cm x 20cm. Dot the garlic over the 2/3 of the surface and then fold the bare piece of dough over a third of the garlic-covered dough. 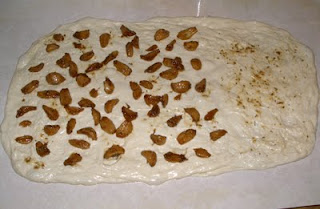 Then roll this fold of dough over so that the remaining garlic-covered piece is covered by dough. Then fold this piece of dough in by a third...then in by a third again. Finally place the folded dough back in the bowl, cover and leave for 30 minutes.

Wipe the oil off the worksurface and lightly dust it with flour. Pin the dough out again as above and fold it in by thirds each way. Replace it in the bowl, cover and leave for a further 30 minutes.

Pin the dough out again fold it in by thirds each way again as shown. Leave the dough for 10 minutes while you prepare the tray the bread will rise on.

Cover a large dinner tray with a tea-towel. Lightly dust it with white flour, then cut the dough into thirds with a serrated knife.

Place the dough cut side upward on the tray then pinch the fabric between each so that they stay separated. 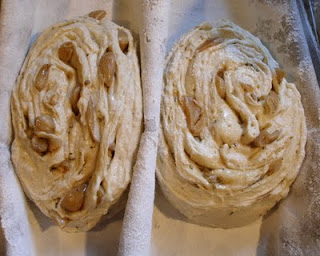 Cover and leave for 45 minutes while you heat the oven to 200C (same for fan assisted)/390F/gas mark 5-6. I put a large unglazed terracotta tile in the oven and shovel the dough directly onto it with the back of a small cookie tray. It gives a much better finish and perhaps the bread is slightly crisper, but the bread will still be good placed on a tray just before baking. I also put a small tray of water in the bottom of the oven so that the heat is a little moist, which will help the bread to rise and colour.

Lightly dust the back of a cookie tray (if you have a stone in the oven) or the surface of a baking tray with semolina or flour. Carefully pick the dough up off the cloth, scooping it in from end to end with your finger then quickly lift it clear of the cloth and onto the tray.

Either shovel the dough onto the hot stone, or place the baking tray in the oven, shut the door quickly and bake for 20 - 30 minutes until the loaves are a good rich golden brown. 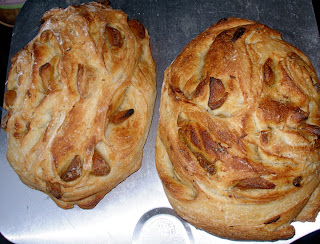 Hubby's descriptions: "Oh my God".  "Incredible, incredible garlic bread."  "Thanks a lot honey, you ruined a perfectly good craving."  (He had just gone and bought a pint of cookie dough ice cream.  After eating the bread, he didn't need it anymore.)  ☺

This will go up for Yeastspotting!

Update: Was astonished, honored and tickled for hours when I saw that Dan Lepard himself tweeted this post!