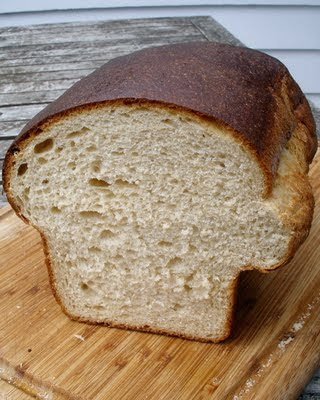 I was out of sandwich bread yesterday so I went back to an old favorite recipe and mixed it up just a little bit to use up some special flour I have in the freezer.  Then, right after I threw it all together and it was mixing, I realized I had misread an amount and added half a cup too much flour.  Well phooey.  I suppose I could have just added a couple more tablespoons of water, but I had aging eggs to use up so I figured I'd toss one in to even it out.  (Bread was never hurt by enriching with eggs.)

Hmmm.  One extra large egg more than evens out half a cup of flour.  I ended up adding about another half cup to get the consistency correct.  I left it a wee bit sticky.  Good thing the original recipe called for an 8x4" pan because I knew I would need the 9x5" after adding all that extra flour!  So I crossed my fingers, loafed it up, baked it off and was very happy with the resulting loaf.  It has a beautiful dark, thin crust with a pillow soft crumb.  Even better, my three year old, who has been picky about crusts of late, happily ate a whole large buttered slice down to the last crumb and commented multiple times that it was very good.  Spelt is very mild and slightly sweet and nutty.  I think I will start using it more often for a portion of whole wheat.  As it is, I am writing this recipe up with the changes I made for my own reference.  I will certainly be making it again.  Oh, and it makes FABULOUS toast.

Update:  Yes, you can indeed get two lovely 8x4" loaves out of this recipe.  Perfect sandwich size and lovingly garnished with flowers by my four year old.  (These two loaves do not have added gluten for those who have been asking if it is necessary.) 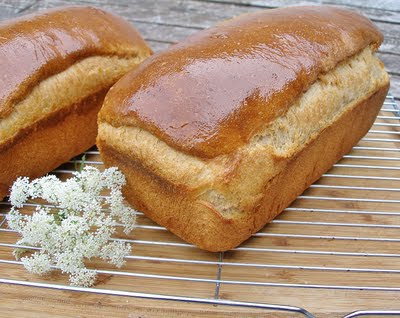 1 ¼ c lukewarm water
2 T sunflower oil or softened butter
¼ c honey
1 extra large egg
1 c white whole wheat flour
1 c whole grain spelt flour
2¼ c unbleached all purpose flour  (I also used a small portion of white spelt flour for this but that is essentially the same as all purpose and once it is gone I will use regular flour)
1/3 c dry milk
1 T vital wheat gluten, optional
1 T potato flour, optional (it adds moisture, enhances texture and extends shelf life)
1 ½ t salt
1 ½ t Instant Yeast
I was lazy and used the dough cycle on the bread machine.  Add ingredients in order listed and let her go.  Rise time will be about 1 to 1 ½ hours.  Deflate the dough and shape to fit in a greased 9½ x 5½" loaf pan two greased 8x4" bread pans.  Let rise until just cresting about ½" over the rim, about 45 minutes.  Bake in a preheated 375ºF oven for 30 minutes or until richly brown and hollow sounding when thumped.  Remove the bread from the oven, remove it from the pan and cool on a rack.  For extra flavor and a soft crust, brush the top with butter when you take it out.