Fabulous Homemade Marshmallow Fluff in under an hour

Okay, which one did you grow up with?  We had the Kraft Jet puffed marshmallow creme. 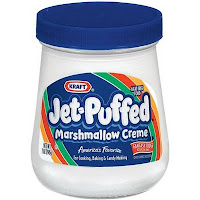 
I can't believe I ever loved that stuff.  I mean seriously, blue food coloring?  It's WHITE.  (You know they put that in their marshmallows too...)  And if you read this blog on a regular basis, you know how I feel about corn and my poor daughter's allergy.  At least it's not high fructose corn syrup.  But it is a fluffy whipped concoction of sugar and chemicals. 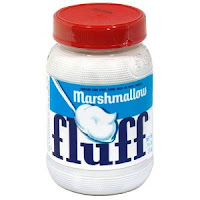 But, corn syrup aside, I can't go for the vanillin.  Usually synthetic as well as often a corn derivative.

So what's the shelf life on those guys and how long do they sit there?  Or in your own pantry for that matter?  I saw a great looking fruit dip the other day that calls for the standard 7 oz. jar of fluff.  Well guess what... I happen to have a great recipe for fluff from Marshmallows: Homemade Gourmet Treats by Eileen Talanian.

I didn't have any of the marshmallow syrup made up that her fabulous recipes use instead of corn syrup.  (I usually only make it up when I need it.)  But I do keep Lyle's Golden Syrup

on hand.  This past winter holiday season I discovered that it stands in beautifully for confections that are usually made with corn syrup.  And I just love the way it tastes.  It's made from cane sugar and has a unique and wonderful caramely flavor.  Now the consistency of the syrup in the bottles tends to be thinner than that of the tins and some people prefer the thicker viscosity for applications like pancake syrup.  But one 11oz. bottle happens to be almost the exact amount needed for a full batch of fluff and is easier to measure out.  If it matters to you, be my guest and get the tin.

This fluff will not be glaring white but a creamy very light caramel color.  It tastes heavenly.  My daughters go gaga for it, AND it freezes wonderfully!  Well here, take a look for yourself: 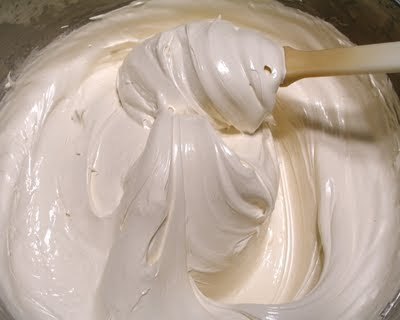 It really is gorgeous stuff.  If you want it really white go ahead and make the marshmallow syrup (get the book.)  Or you could use light corn syrup but for goodness sakes seek out an organic brand that isn't high fructose and genetically programmed to be its own pesticide.  Yeah, I want that in my body.  Not.  I have found that almost all the grocery stores are carrying Lyle's now.  It will be in the pancake syrup section usually - look for the green and gold label or tin.  I can whip up a batch in around half an hour, though usually I make a half batch.  The full is the equivalent of about three jars of fluff.  It may freeze well, but I don't need that much around.  ☺

(I did actually use 7 oz. of this homemade fluff in the fruit dip recipe posted by Brown Eyed Baker today and it turned out fabulous - folks were asking what was in it because it was so good.)

I usually make a half batch for our small family needs.  The full batch pretty much fills up my kitchenaid.  I did make a full batch this time because I needed it for a recipe and wanted enough to save in the freezer for super special treats for the girls.  You know they have never had a fluffernutter?  We will have to remedy that situation.

Remember to calibrate your thermometer!

(makes about as much as 3 jars of store bought)

Place the base ingredients into a heavy 2 qt saucepan and bring to boil over medium heat.  Cover and boil for 2 minutes.  Remove cover, insert candy thermometer and boil to 240º F.  Do not stir the mixture once the lid has been removed.  Remove the pan from heat and set it aside to cool for 3 or 4 minutes.

When the temperature of the base reaches 220ºF, (for me, that's right after the 2 minute lidded boil) place the whites and salt in the bowl of a stand mixer and beat on medium speed until thick, fluffy and opaque.  (Soft peak is fine, just don't let it get to stiff and curdled.)  Once the base has reached 240º and cooled for a couple minutes, slowly stream it down the side of the mixer bowl with the beater on medium speed, taking care not to let the base get into the beater so it doesn't splash.  Drizzle in the vanilla.

Turn the speed up to high and beat for 7 minutes.  Transfer the fluff to a plastic container, cover and store in the fridge for up to 2 weeks or freeze for up to 2 months.  (Honestly, I trust the powdered egg whites chilled to two weeks but fresh I would want to use up in one week - another reason I usually do half batches.)

And lest you think vanilla and strawberry are the only options...   Cinnamon, chocolate speckle, lemon, blackberry, espresso, butterscotch, cherry, mint, banana, honey-star anise, wine, frozen pumpkin and green tea-5 spice are only some of the other options.

The only challenge may be keeping little spoons out of the bowl... 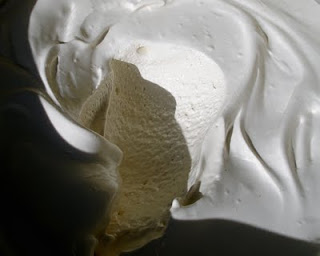