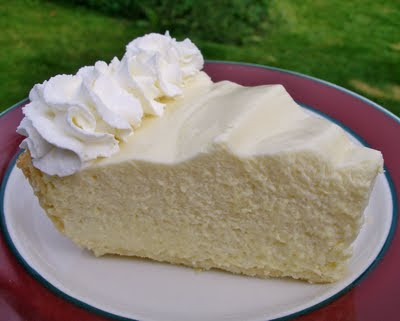 This is one of my favorite summertime pies.  Lemon actually ranks right up in the top 5 flavors (so I hear) for desserts and is pushing #1 for me.  I adore just about all things lemon.  The nice thing about this pie is that it only requires the oven to be on long enough to bake the crust.  Now I do love a good lemon meringue pie with that silky tart curd and (if done correctly) billowing mounds of creamy meringue perfectly melded to it.  But let's face it, that one is a lot harder.  I haven't actually attempted one myself.  And I may not anytime soon because this is so much easier and just as good in its own right.  You do make a lemon custard and you do whip up a meringue of sorts; but folded together they make an exceptionally light, modestly tart, and simply ethereal pie filling.

Now I have seen these done with a graham cracker crust and I don't recommend it.  I tried it once to save time and it was not nearly as good as a real pie crust.  Too sweet.  The one exception I might consider is a crumb crust made with oatmeal snack crackers

.  They are not nearly as sweet and would have a better contrast to the filling.  I do love these with a standard pie crust though.  Do try to make this with fresh lemon juice, it's just not as good otherwise, plus you need the zest.  Lemons are cheap and usually available.  Even the organic ones are inexpensive and much safer considering how highly sprayed the citrus crops usually are in conventional farming.  So yes, I do recommend organic if you can get it.  Otherwise wash and scrub the lemons very thoroughly before zesting.  Oh, and zest

before you juice.  Seems like common sense but even I've forgotten on occasion.  ☺ 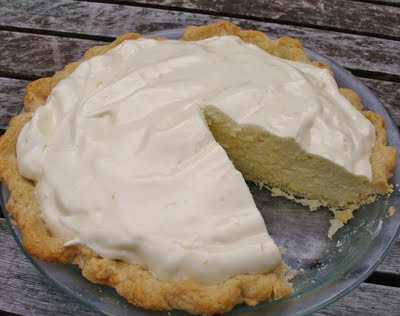 Chill butter and shortening (separately) in the refrigerator.  Cut into small pieces just before using.  In the bowl of a food processor, combine the flour and salt by pulsing 3 to 4 times.  Add butter and pulse 5 to 6 times until texture is somewhat mealy.  Some larger chunks are okay.  Add shortening and pulse another 3 or 4 times.  Sprinkle a couple/few tablespoons of the ice water all over the mixture and pulse twice.  Sprinkle on another tablespoon and pulse once or twice.  Add another tablespoon if necessary, stop just when the dough is starting to form clumps.  Dump out the mixture into large ziploc bag, squeeze it together and press into a rounded disk.  Refrigerate for at least 30 minutes or up to two days.

Preheat oven to 400º F.  Roll out dough into a 10 or 11" circle (it helps to whack it flatter with your pin first).  Slide pie plate under and ease the crust into position.  Fold under the edges and crimp as you like.  Use any longer edges to fill in shorter gaps for an even thickness on the edge.  (There won't be any leftovers.)  Dock the crust all over with a fork and stick in the freezer for 15 minutes.  Place a large piece of parchment paper over the crust and fill with pie weights/pie chain/dried beans.  Gently even out the weights.  Bake for 15 minutes.  Carefully remove parchment and weights and continue baking for another 5-8 minutes until golden brown.  (Now is when you would add a pie shield if you have one.)  Remove and place on cooling rack.  Allow to cool completely before filling.

Stir together ½ cup sugar and gelatin in a small saucepan.  Blend egg yolks, water and lemon juice together and then stir into sugar mixture.  (If you pour the juice mixture through a fine mesh sieve first, you won't have to worry about any curdled egg whites in your custard.)  Cook over medium heat, stirring constantly until mixture boils.  Remove from heat and stir in lemon zest.  Chill in the refrigerator or an ice bath, stirring occasionally, until mixture mounds slightly when dropped from a spoon.  (The refrigerator option is the more forgiving time option.)
Beat egg whites (or reconstituted dried egg whites) and cream of tartar until foamy.  Beat in second ½ cup of sugar, a couple tbsp at a time until stiff and glossy.  Do not underbeat or your filling will deflate when you combine it.  Fold lemon mixture into meringue.  Pile into cooled, baked pie shell.  (I sometimes will give the filling a few minutes in the fridge to firm up a little bit so it really piles well, but you have to watch it like a hawk so it doesn't set too much.)  Chill at least three hours until set.  Try not to eat it all in one sitting.
☺

* My backseat baker notes:  The egg whites are not cooked, so unless you have access to fresh farm pastured eggs, I do not recommend using the fresh whites.  Store eggs are just not safe that way.  I do use the dried whites when I make this for company.
Please don't use crisco in the crust.  Throw it out if you have any.  That stuff is SO bad for you: fully and partially hydrogenated oils, soybean oil - a GMO ingredient; it really is a heart attack in a can.  If you can't find the non-hydrogenated Spectrum or Jungle brand shortenings, you'd do better to try an all butter crust.  It will be more flaky and less tender than shortening but still delicious.  I grew up with crisco crusts, but I can tell you that the spectrum works just as well.  The ratio is slightly different but once you figure it out with your own recipe you will have the same result as with the blue bucket.
at July 09, 2011