A Corn Syrup Substitute for the holidays 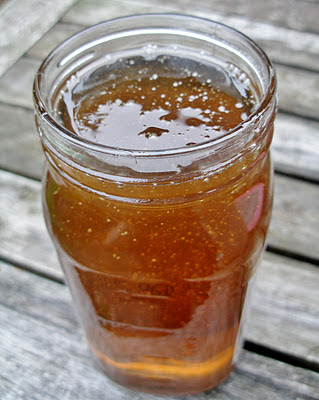 Just made a batch of invert syrup in preparation for some upcoming candy making sessions.  (Yes, mine is golden colored, but that's the sugar I used.)  Going to make this year's batch of candy corn but I am going to try out an alternate version that is marshmallow based, kind of like a fondant.  Still need the syrup to make the marshmallows.  I really love using the Lyle's golden syrup for quick and easy marshmallows, but I decided this time to go with the invert syrup for a simpler flavor profile.  I used the standard recipe I use with Lyle's but used the invert syrup and two tablespoons of honey instead.  The thought being that candy corn has some honey flavoring in it.  Not much, but a little.  We'll see if the touch of honey in the mallows translates properly into the candy corn. 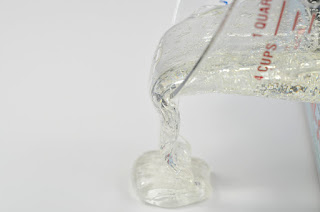 photo credit: chefeddy.com
I've learned a few things about making invert syrup in the past couple years.  Number one, you really cannot do a small scale batch - it will crystallize on you.  You can scale down a marshmallow recipe but not the invert syrup.  Number two, if you have a gas cooktop, you will have much better success if you use a heat diffuser.  And number three, you can successfully use a less refined sugar if you so desire and don't mind a more colored result.  You will just have to do some skimming of foam and impurities that surface.  If you are trying to avoid corn syrup but still want to do your holiday confectionery magic, try some homemade invert syrup.  One to one substitution, beautifully clean flavor profile, keeps up to 6 months.  The picture above is made with extra fine granulated sugar.  (It's also that thick because it is chilled.)  The one on top that I made used organic evaporated cane sugar, which has a blonde color out of the bag.  I did have to skim about 2-3 tablespoons of foam impurities while cooking, but ended up with about 3 cups of beautiful syrup.  It is perfectly clear and thick, resting in my fridge now, not a sign of any crystallization going on.  That diffuser really helped.  (With gas stove-tops, a lot of the heat goes up the side of the pan and can affect the outcome.  This is my diffuser, I got it years ago as a requested Christmas present and have only used it a handful of times, but those times have really appreciated the option: 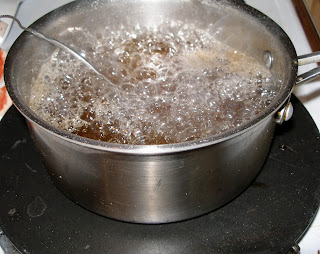 It's nice and flat and takes up no room in my stove drawer.  Hooray for even heating.  So here is the recipe, taken directly from Eddy Van Damme.
Invert Sugar
makes ~ 2 lb 3 oz
4 cups + 6 tbsp granulated sugar (white sugar yields a nice clear syrup, evaporated cane sugar yields a honey colored syrup)
2 cups water
¼ tsp cream of tartar or citric acid (I used the cream of tartar)
If you have an induction cook top or an electric stove use these options instead of gas. (If you have gas, use a heat diffuser.)  In a non-reactive saucepan stir to a boil the sugar, water and cream of tartar (or citric acid).
Once the mixture boils wash away any sugar crystals stuck to the side of the pan with pastry brush dipped in water.  Any additional water added to the pan from this process has no effect on the final outcome.
On medium heat without stirring boil the mixture to 236°F (114°C).  Remove from heat and cover the pan. Let cool at room temperature.  Store in a refrigerator.*  Invert sugar will last at least 6 months.

* Just in case you are wondering why you should store the syrup in the fridge, the low temperature significantly reduces the molecular movement of the sugar crystals and will slow down any crystallization that may want to occur.
(Here's another trick to help prevent crystallization:  Use two sauce pans.  When you are close to temperature, pour the mixture into a clean pan and finish the last few degrees in that pan.  This helps ensure no crystals introduced from the side of the pan, as does cooling with the lid on.  Also, store your finished syrup in a glass jar as the surface of plastic is more likely to speed crystallization.)

Using the two pan method, I was able to simply pour it into the jar and not have to worry about ladling or seed crystals.  As of four days later it is still pristinely uncrystallized.  Let come to room temperature for ease of measuring.
at October 20, 2011