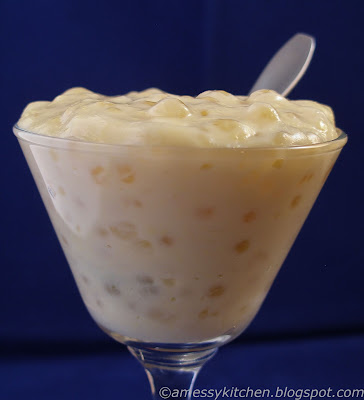 Pudding is a pretty simple but satisfying treat.  We never had homemade pudding growing up and those premade cups were a few and far between occurrence.  We did the cook and serve and/or instant box stuff.  Probably because making pudding does take a little bit of time, and standing over the stove was not on the top of the list.  I do remember that tapioca was an especial treat because it was the most rarely seen in our house.  (And I think I had to wrestle my dad for it.)  So I was very happy to find a version that required little supervision and could be accomplished while I got things done around the house.  Like that pile of laundry that's been sitting by the kitchen table for two days now.  This makes a lovely rich, thick and filling pudding.  I must admit, I do love my tapioca warm and it is just as fabulous and thick before chilling.

Update: for those wanting to use honey as a healthier option instead of sugar, be aware that honey is sweeter than sugar and so you only need 75% as much.  That's a nice bonus!  The amount of honey for equivalent sweetness is ½ cup plus 1 tbsp.  Enjoy!

Stir together the milk, sugar and tapioca in a crock pot.  Cover and cook on high for about 1½-2 hours.  Stir occasionally as you walk through the kitchen.  Do watch to make sure it doesn't get to boiling though or you may have a mess to clean up.  It will depend on the cooker in use.  (Fortunately caught mine right before it boiled over the sides.)  The tapioca will get soft and start to thicken.

In a small bowl, whisk together the eggs, vanilla and salt.  Temper the eggs by slowly whisking in ½ cup of the tapioca mixture.  Do that twice more with two more half cupfuls.  Then whisk the egg mixture into the tapioca until well combined.  Cover and cook for 15-20 minutes longer until the pudding is nice and thick.  (It may not take that long, mine was practically ready as soon as I whisked in the eggs because my tapioca had boiled, but in that case you have to be careful not to scramble the eggs!)  Portion into single serving containers and chill in the fridge.  Cover with a piece of plastic wrap to avoid a skin.

Enjoy cold or warm, plain or with whipped cream!