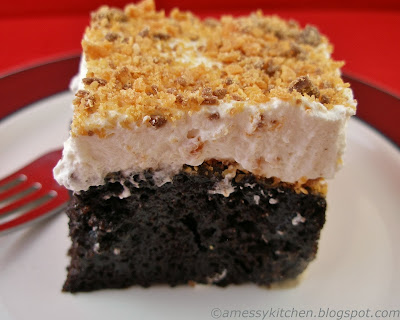 I've had my eye on this recipe since July.  It looked so rich and decadent.  But it was one of those "cool" desserts that uses all mixes and premade ingredients.  Well, those are on the naughty list in this house.  (That would be allergy unfriendly.)  So I've been intending on "scratchifying" the thing for months now.  If you like the idea of the easy recipe, you can find it here.  I believe it was originally a Taste of Home recipe submission.  I will never make it that way.  I have sworn off Cool whip, much as I used to like it, because of the soybean oil and hydrogenated fats.  Besides, this scratch version is ridiculously rich and satisfying.  (Read: better.)  I had one tiny forkful to satisfy myself that it turned out as I had hoped.  Now I'm hiding it until I can send it to work!  It's like a Butterfinger blizzard on top of a chocolate tres leche cake.  Rich.  Sweet.  Decadent.  I also cut it down to a half batch of one 9x9" pan.  Firstly, because that's how much cake my favorite recipe made; secondly, who needs that much temptation calling from the icebox?  It can always be doubled back up to the 9x13" pan to serve a crowd.  If you want to try the scratch version, here is how I did it.  (My favorite chocolate cupcake recipe served perfectly and comes together with a whisk almost as quickly as a boxed mix.)

(Best served the day it's made, or reserve the topping until ready to serve - otherwise you lose that nice crunch.)

One chocolate cake to fit 9" square pan (I used this recipe)
½ can (7 oz) sweetened condensed milk (freeze the rest for another time)
¼ cup caramel ice cream topping (I used this recipe or you can purchase)
5 fun size Butterfinger candy bars, crushed

Preheat oven to 350ºF.  Butter and flour a 9" square baking pan.  Prepare cake batter as directed and pour into pan.  Bake for 25-30 minutes until done.  Cool on a rack.

Combine caramel sauce and condensed milk in a small bowl.  Poke holes about every two inches all over the cooled cake.  Pour the caramel mixture over the cake.  Sprinkle with two thirds of the crushed candy bars.

In a small pan combine gelatin, cold water and vanilla; let stand until bloomed (thick).  Place over low heat, stirring constantly, just until the gelatin dissolves.  Remove from heat and cool but do not allow it to set.  In a medium bowl, whip the cream and powdered sugar until slightly thickened.  While beating on low speed, gradually add in the gelatin mixture.  Whip at high speed until stiff.

Spread the whipped cream evenly over the cake.  Sprinkle with the remaining crushed candy bars.

Refrigerate cake until ready to serve.  Cut smaller pieces, this is sinfully rich but ever so satisfying.  ☺ 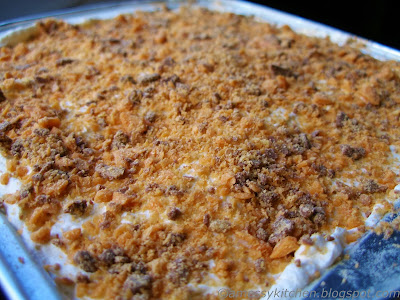 Email ThisBlogThis!Share to TwitterShare to FacebookShare to Pinterest
Labels: cakes