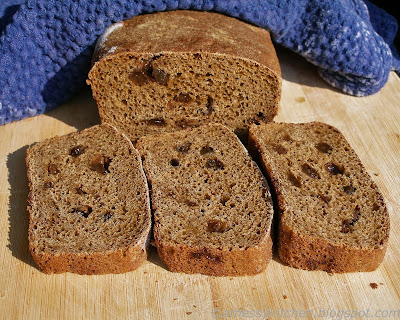 This month's BBB buddy challenge was a versatile brown bread.  I, fully admitting my sweeter side leanings, took it to a slightly sweeter interpretation.  I know at least one of the BBB bakers left out the sugar entirely, excepting the molasses of course!  So it works very well on the savoury less sweet side too.  I went the spelt route with my loaf and I'm still working out how much kneading it will tolerate, so my loaf was a little flat and the dough quite slack.  I should have under hydrated with the spelt.  Still it turned out very yummy with awesome aroma and great flavour.  The dough definitely liked to rise in a warmer location.  It sat for three hours in a cold kitchen not doing much.  When I turned on the oven to warm things up, it perked up quite a bit and readily rose for me.  I plumped my raisins with hot water and I added some cinnamon and an extra couple teaspoons of coconut sugar sprinkle when I shaped the loaf.  It reminds me of my childhood memories of the brown bread (shhhh, in a can) we used to have as a rare treat.  This was excellent and I am tempted to try it steamed myself to see just how close to that memory I can get.  It was excellent toasted.  I am so a toast person.  Here is the recipe as adapted by one of the babes for a mixer, with my changes in red.  I can attest that even my slightly sweeter version is excellent with a hearty fall stew.

In your mixer, combine all dry ingredients, then add the wet (not the raisins yet) and mix with your dough hook for about 5 minutes, until the dough is cleaning the bowl. Adjust the water/flour if necessary. Add in the raisins and mix until thoroughly combined.   (I saved the raisins until I formed the loaf.)
Oil the bowl lightly and roll dough in it to cover. Cover bowl and let rise until doubled.
Punch down and let rise until doubled again.
Divide dough in half and shape as desired.
(I formed my loaf cinnamon bread style, sprinkling a little coconut sugar and cinnamon followed by the raisins, and then rolled up and placed in a small bread pan for my half batch.)
Let rise 1 hour.
Preheat oven to 400°F
Coat with egg wash, if desired.
Slash and put in oven.
Reduce heat to 375°F
Bake until you get an internal temperature of over 200°F
25-35 minutes, depending on shape of bread
Let cool on racks. 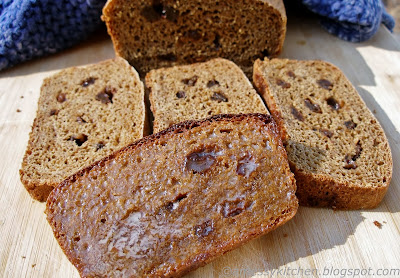 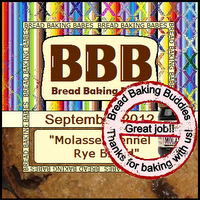