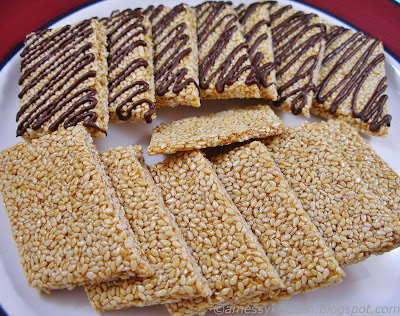 I grew up with Louck's sesame snaps as a super special - once in great while - only when we were at that special shop, treat.  I love that you can get them more easily nowadays.  I seriously am addicted to the new version with dark chocolate and I like the fact that they are produced in my own state.  Still, I wanted to see if I could make an easy version at home.  I tried a honey based recipe I saw and while the flavor was good, there was way too much honey and it turned into a hard candy that you had to suck on if you wanted to keep your teeth.  After much googling and perusing of techniques and recipes, I decided a Somali recipe produced something that fit the bill.  Something that would turn out light and very crunchy.  I do like a little bit of the honey flavor so I added some in for mine.  Sesame snaps are so super simple as far as ingredients.  At their most basic, sugar and sesame seeds.  The seeds are toasted for crunch and flavor.  I added a pinch of salt and a bit of honey for more flavor.  The trick to getting these to be really good and having that nice snap to them is to roll as thinly as possible.  Some of mine in the middle were a little tall and harder to bite (still crunchy) but the edges were wonderfully snappy.  Go for 1/8" thickness.  My youngest, who wouldn't touch the first batch with all that honey, has come back for thirds on these crispies.

Heat a large, heavy bottomed pan over medium heat.  Cook and stir the sesame seeds to toast, about 5 minutes. 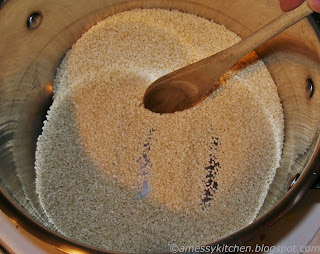 When they start to turn lightly golden, check a few for crunchiness.  Pour into a bowl and set aside.  They will make a neat crackling sound as they cool and should be nice and crunchy. 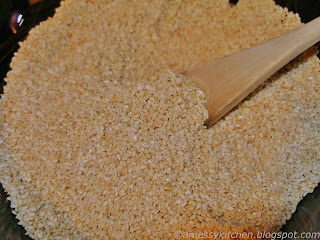 Return the pan to the heat and gradually melt the sugar without stirring.  Add it little by little as the previous layer melts.  You can tilt the pan to mix a bit.  Once the sugar is melted, add the salt and honey and stir to combine.  If there is any unmelted sugar, the honey may cause it to lump up a bit.  Just stir over the heat until it is all dissolved. 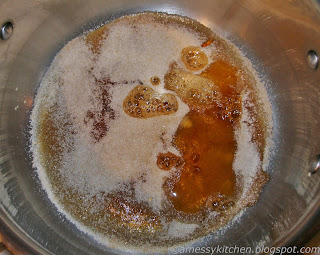 Stir in the toasted sesame seeds and mix for a minute until evenly combined. 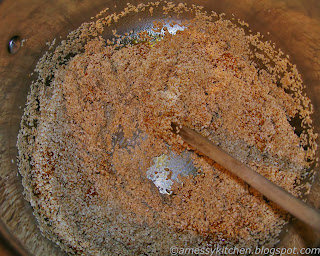 Turn them out onto a lightly oiled surface.  Foil will work, I used parchment.  Cover with parchment paper and roll out as thin as possible.  Work quickly because the candy will harden and no longer be pliable.  Once it is at your desired thickness, and while still warm, cut/score the candy with a sharp knife. 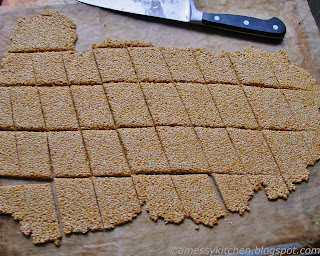 They will break apart easily when cooled.  Store in an airtight container.  If you want to try the chocolate version, I just melted a couple tablespoons of mini chocolate chips with a pinch of coconut oil and drizzled on using a sandwich baggie as a piping bag. 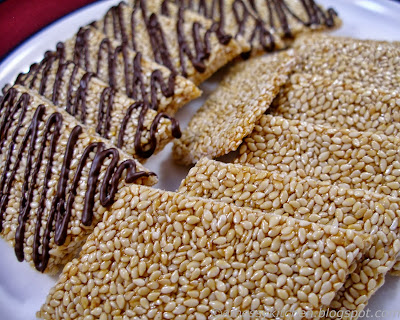