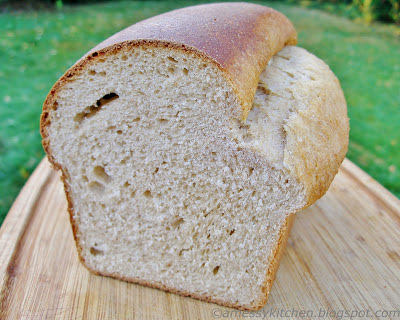 Up until now, I have been trying without really good results to make a 100% spelt sandwich loaf.  (Trying to get away from modern wheat as much as possible, though I do still love King Arthur flours.)  I did like Hildegard's spelt loaf but for some reason it wasn't a favorite of the girls.  I played around with spelt in a number of recipes and I have learned a few things.  My broad bread statement that bread dough would rather be too wet than too dry does not apply to spelt.  Spelt is highly water soluble and does not like to be over hydrated or the gluten will break down and give you dough soup.  The gluten is strong but delicate at the same time.  It doesn't like to be over kneaded or handled too much.  In my research I found that the qualities kamut flour provides to the dough are the perfect balance to the spelt, while still being a more ancient grain.  The buttery kamut is also a nice foil to the sweet and nutty spelt.  So I tinkered around with a couple recipes and found a balance that gave me a winning loaf.  (The girls like it.)  The loaf pictured was the first try and it had a couple handfuls of regular white flour thrown in for insurance, but subsequent loaves were as written and turned out exactly the same.  It's a nice loaf, somewhat delicate crumb, but holds up to peanut butter sandwiches and makes excellent toast.  Don't leave out the vinegar, it helps the dough structure.  A pinch of citric acid will do the same though, if you have it.  If you're trying to avoid modern wheat, give this a try.  A good general rule for conversion to spelt in a recipe is to reduce water by 25% and reduce mixing or kneading time by half.


Combine all ingredients in a stand mixer or bread machine.  Knead with machine or dough hook for 7 or 8 minutes until smooth and elastic.  Cover and allow to rise for 70-90 minutes until double.  Shape dough into a loaf and place in a buttered loaf pan.  Allow to rise until not quite double, another 40-60 minutes.  Sprinkle or spritz the top of the loaf with a little water.  Bake in a preheated 350ºF oven for 30-35 minutes until golden brown and hollow sounding when thumped on the bottom.  (This bread has a slow rise but lots of oven spring so try not to over proof or it will really bust over the top!)  Do not attempt to cut until completely cool.