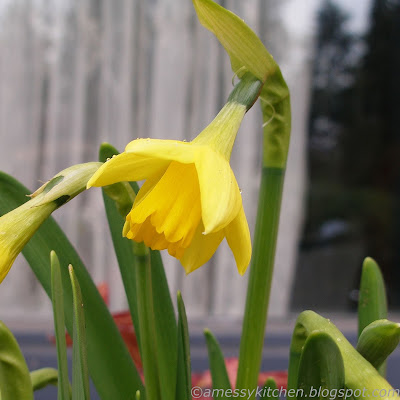 There are some pink dawn viburnums that have been blooming in the neighborhood since late January.  Some forsythias started to open up this week.  I have lots of bulbs popping up and that little narcissus you see there just opened today in a pot by my front door.  But other than that it is still wet and cold and looks like the dead of winter here in the northwest.  Any color has been put in by desperate people like me. 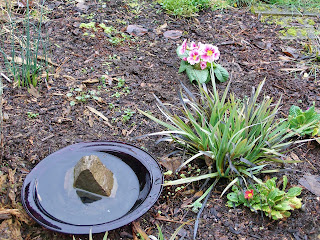 Yeah, that little pop of pink I let the girls stick in there.  Bulb greens aren't enough for me right now. 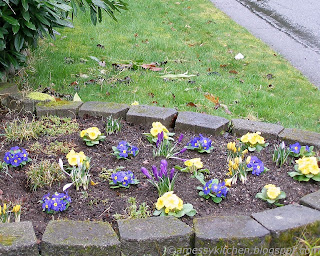 I filled my front with nice bright primroses and crocuses.  Feeling a little better for the color.  ☺

So with the cold and the colds, our menu has been filled with soups lately.  It's true, soup is good food.  If you have homemade stock, it is especially good for your body and immune system.

Here are some of our favorite soups not only now but all year: 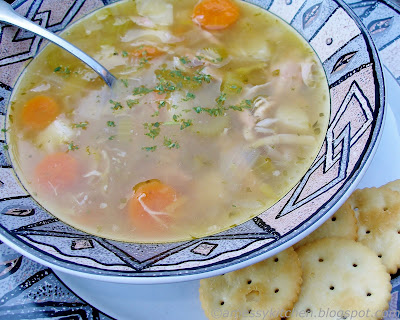 This is a great one because you can work on it in sections.  Be generous with the veggies.  It's great because it also makes its own stock.  Now it is possible to turn this into a 5-6 hour soup also.  I do it often when I want the soup that day.  Just sear the chicken for 5-7 minutes a side, then add the leeks and water.  Simmer for an hour, remove and cool the chicken a bit.  Pick the chicken and put the meat and biggest bones back in the pot.  Let it simmer, covered, on low while you prep the veggies and put them in as you go.  Season and let simmer on low until dinner time.  I recommend starting around noon, no later than 1:30ish to have it nicely done for dinner with some good nourishing stock to it.  It will not gel like it would with the full time recipe but will still be delicious.  (Take out the bones before serving.) 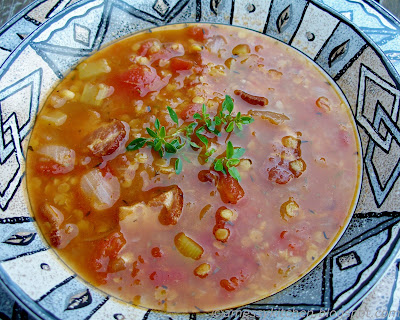 I love this soup because it is simple and relatively quick to prepare.  From putting the bacon in the pot to done is around 30-40 minutes. 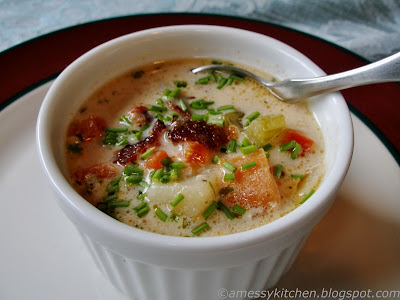 This was inspired by one of my favorite salmon recipes and the first one that ever turned out perfectly cooked salmon for me.  I usually have leftover salmon in the freezer and this is a nice lighter change up from clam chowder. 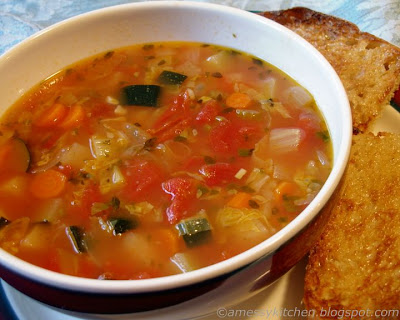 A recipe I've had for years, by Bertoli.  This has got to be one of our most favorite soups.  Use veggie broth to make it vegan for the in-laws even.  That soup was the first time my dear MIL ever demanded a recipe from me! 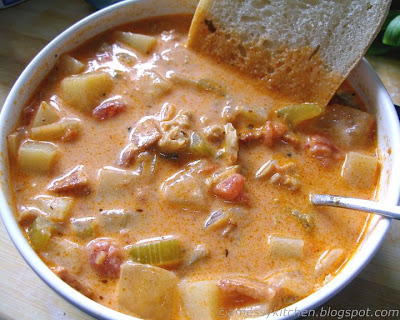 My oldest daughter's favorite soup.  I grew up with red chowder and I will always prefer it.  This is based on my mom's recipe and I don't make it nearly as often as R would like.  It's warming and comforting with just a hint of heat.

Try a pot of soup this week to ward off the cold until spring comes!
at February 23, 2013

Email ThisBlogThis!Share to TwitterShare to FacebookShare to Pinterest
Labels: soup