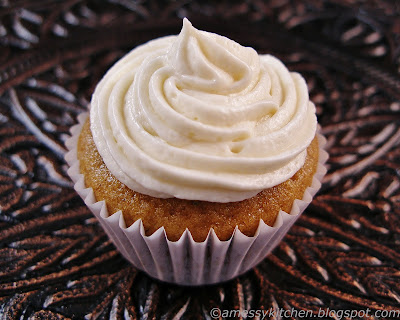 Do you decide on the cake or the frosting first?  I found this frosting to try and it turned out so great that I needed to find a more acceptable vehicle to transport it to a mouth than a mere spoon.  At first I decided on a simple spice cake.  I may still do that at some point but spring is looming and my garden gloves are calling me.  So I thought something with zucchini in it would be appropriate to add to the arsenal of ways to use up the bounty of the prolific plant.  I adore zucchini bread but for this occasion I did want something lighter and more cupcake friendly.  These little morsels filled the bill.  And the frosting is delightfully fluffy and silky like a true buttercream. 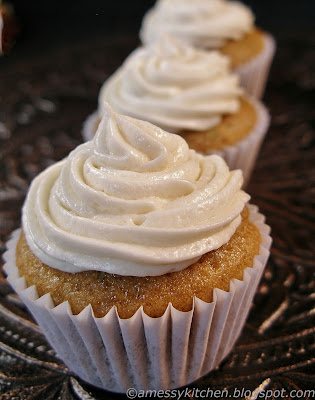 Update: These freeze amazingly well, just freeze first on a rack or plate, then into a ziploc freezer bag or container.  They thaw to just like fresh in only 20-30 minutes.

Preheat oven to 325ºF and line two mini muffin pans with paper liners.  In a mixing bowl, combine the oil, juice, applesauce, egg, sugars and extract until thoroughly mixed.  Combine the dry ingredients and stir into the egg mixture.  Add zucchini and stir well.  Using a tablespoon cookie dough scoop to portion batter into pans will yield exactly three dozen mini cupcakes.  If you only have one or two pans, the batter may sit between batches, just don't stir it or the cakes will be slightly smaller.  Bake for 15 minutes or until done.  Cool for a few minutes before removing to a wire rack.  Cool completely before frosting as desired. 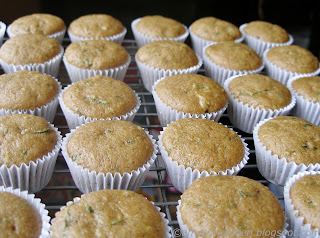 
Add the sugar, salt, baking powder and citric acid and combine on low speed until moistened.  Turn the machine up to medium high and beat for four minutes until smooth and glossy, like you would see in a canned frosting.  Scrape down once or twice during mix time.

Use immediately or store in an airtight container in the refrigerator for up to five days. 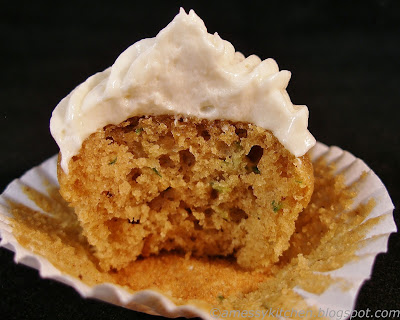