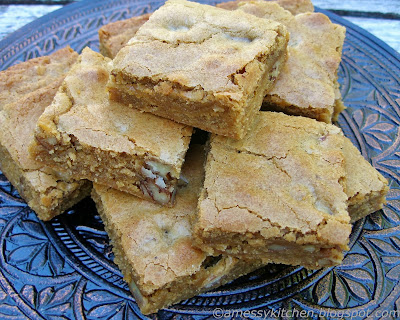 This recipe is the result of wanting to recreate a totally amazing blondie that I make often, but without the need for a trek to Trader Joe's for the secret ingredient.  (That would be their cream filled maple leaf sandwich cookies, to be exact.)  Those bars have been described as crack blondies.  I have people look at me in disbelief and horror (sometimes a glare), if I have not brought them to a function.  They were even requested at the wedding reception of a friend.  Even my mom, who normally is not big into sweets, couldn't stay out of these last weekend.  I can't take credit for the original recipe, but here are the tweaks I made to it so that I don't have to make a special trip every time I whip up a batch.  I know pure maple sugar may not be readily available in all grocery stores, but once you have a bag a little goes a long way.  (Which is nice considering the price of it.)  Normally I like pecans, but in this case the bitterness of the walnuts is a nice contrast to the rich sweetness of the blondie.  I think they turn out just as good this way, but the next time we have a get together with the friends that crave them I will have to do an official taste test to confirm if they go over as well.  ☺ 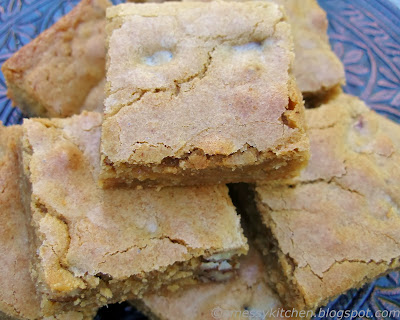 In a pot over medium-low heat, cook and stir the butter until it turns golden brown.  (It will foam twice and brown during the second foam which will be clear bubbles vs white foam.)  Watch it carefully to prevent burning.  Transfer it to a mixing bowl to cool slightly.

Mix together the flour, baking powder and salt in a bowl and set aside.

Combine the sugars with the butter until there are no lumps of sugar.  Add the eggs to combine, then mix on medium-high speed until light and fluffy.  About 3-4 minutes.  Mix in vanilla.

Add the flour mixture and stir in just until combined.  Fold in the walnuts.

Turn the batter into the lined pan and smooth into corners with a spatula.  Bake until just golden and lightly browned, about 25-30 minutes.  Cool on a wire rack.  Loosen the ends with a knife and use the parchment to lift out the bars.  Cut into desired size squares. 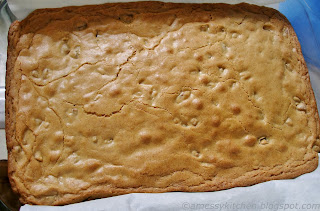 They will store at room temperature for a few days and freeze well.  But they probably won't make it to the freezer.  Or the third day.  ☺
at September 04, 2013