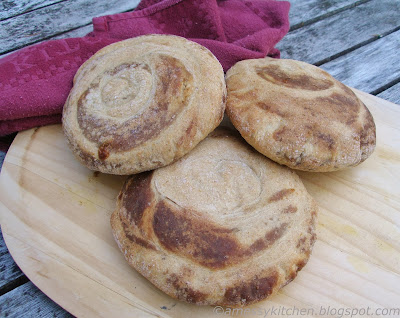 Once again doing two BBB recipes this month, the current one and a catching up recipe. This one, Beirut Tahini Swirls, was originally baked in July of 2009.  Now I like sesame seeds but I have mixed feelings about tahini.  I did not like the store bought kind I bought last time so I decided to make my own.  It's pretty simple, just take sesame seeds and blend to a paste.  Toast first if desired, add oil if desired.  Tahini is bitter on its own and works best as an accent flavor.  I wonder if soaking or sprouting them would take away some of the bitterness...  Maybe another time.  Still not 100% healthy yet and that's too much work.  Reading in the catch-up host kitchen and the original post, I saw that these were meant to be like a flat bread and not a swirly bun.  Oh well.  I like swirly buns, but I was a good kid and flattened my buns.  ☺ 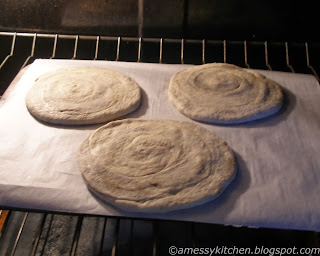 I did decide to add a teaspoon of cinnamon to my tahini for flavor.  You couldn't taste it at all but as you can see from the finished buns, it left a pretty swirl that showed through even after baking.  I didn't add sesame seeds to the outside, didn't want to over do it, but I resisted the temptation to drizzle them with a sugar glaze because I figured that would be completely in-authentic.  And like the posts suggested, they did puff up like little pita pockets. 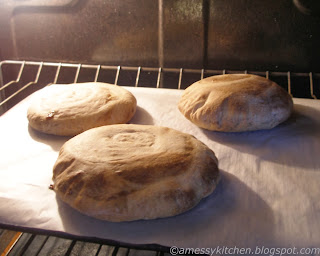 Hubby ate an entire bun and said they were interesting and good.  I think the tahini was a bit strong for my taste but yes, they were interesting and good.  I would cut the tahini with half almond paste next time to let it be more of the great accent flavor I like.  I used light spelt and sprouted whole spelt for the spelt and whole spelt in the host's post.  I also used rapadura for my sugar, which is a very unprocessed form of sugar that is crumbly brown and opaque.  Mixing that with the homemade tahini made for a crumbly filling so I crumbled it over the dough squares as the host kitchens did.  Check out the original and catch-up posts for good how to pictures.  Here is the recipe as published in this month's host kitchen post:

Directions for the stand mixer:
In a small bowl, sift the flours together.
In the bowl of the stand mixer, dissolve the yeast in the lukewarm water.
Stir in one cup of the flour mixture, then add the sugar and the oil and knead with the paddle attachment.
Remove the paddle attachment and install the dough hook.
Incorporate the rest of the flour mixture and the ground flaxseeds and knead for about 2 minutes.
Then add the salt and go on kneading for another 8 minutes (if after 8 minutes the dough is still too sticky, add some more flour, a little at a time and knead until smooth).
Cover the dough with plastic wrap and let rise for 2 to 3 hours, until doubled in volume.
Meanwhile, place a baking stone (or unglazed quarry tiles, or a baking sheet) on the middle oven rack and preheat the oven to 375°F (190°C).
While you are waiting for the dough to proof, prepare the FILLING:
Mix together the tahini and the sugar, stir until smooth

SHAPING:
Pour the dough onto a well-floured surface, fold it a couple of times and form a ball. Cut the dough into 6 equal pieces, divide the tahini mixture into 6 equal portions and work with 3 pieces of dough at a time, keeping the other 3 covered.
Firstly flatten each out on a lightly floured surface and then roll each out to a rectangle of about 5x10 inches (12 x 26 cm).
Spread the top surface with 1/6 of the filling mixture, spreading it almost to the edges (I could not spread it out as it would tear my dough apart; so I dropped some “small chunks” all over).
Roll up the rectangle from a long side into a cylinder, which will stretch as you roll to about 20 inches (50 cm) long.
(At this point I’ve brushed the rolled dough with water as I was afraid the flour around it would prevent the dough from adhering properly).
Anchor one end and coil the bread around itself (like a snail), then tuck the end in.
Sprinkle with some unhulled sesame seeds and flatten with the palm of your hand, then set aside, covered, while you fill and shape the other 2 rectangles.
Return to the first coil and roll out gently with a rolling pin, then roll the other 2 out a little and then return to the first one and roll it out a little more thinly, and so on, until you have rolled each to a round about 6 to 7 inches in diameter.
A little filling may leak out—don’t worry, just leave it.


BAKING:
Place the first 3 swirls on the hot baking stone or tiles (or baking sheet) and bake for 15 to 20 minutes, until golden brown and flaky (I’ve lined my baking stone with parchment paper as I was afraid the sugar filling that was visible on the swirls base would glue them to the stone. The parchment paper did a great job!)
Transfer to a rack to cool and shape and bake the remaining 3 pieces of dough.
Serve warm or at room temperature.
They really had good swirling going on inside despite the flattening! 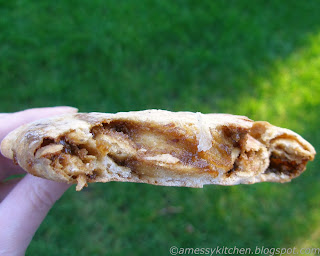 Natashya's kind advice: The swirls should end up like puffy pita. If they are very thin they will be crispy, if they are not rolled enough, they will puff up like cinnamon rolls. We are striving for a flatbread pastry that puffs a little. Try them a couple of times, experiment. They are fun to bake.