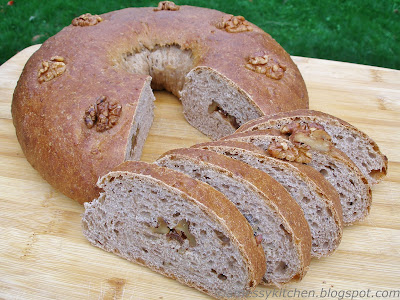 I'll admit this beautiful loaf caused me some frustration.  Not because it was difficult to make, but because it had a streak of lemming in it.  But sometimes you just have to suck it up and realize that everyone has had a baked good take a swan dive at least once.  Oh and if you haven't, don't be smug, it will happen eventually!  Some very unladylike words made it out of my mouth when that thing did a back flip off the peel.  I guess I was loud enough in my proclamations of calamity that hubby came running down the stairs to find out if I was okay.  Yes.  No.  Damn it, now I'm going to have to make another one.  There is no way I am putting a broken loaf on my post.  Well, at least not for the main picture.  I have to include it at least because misery loves company right?  Maybe at the very end of the post.

The next one came out beautifully, though I did take a few liberties with the second batch.  I decided to add some chopped deglet noor dates to the filling, and I used muscovado sugar instead of honey because I am almost out of honey.  I also stuck with the water and powdered milk instead of scalding milk as I did for the first batch.  I did use the powdered whole goat milk at least.  Feel free to use scalded milk in place of the water and milk powder in this bread.  Oh, and I think I added a big spoonful of sourdough starter just for the heck of it, while reducing the water. 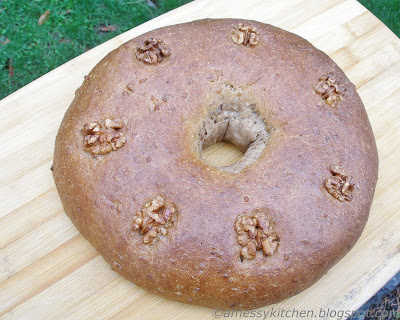 It really turned out pretty!  The whole milk made a nice subtle glaze.  This recipe makes 2 large loaves and I reduced the recipe by half to make only one.  I loved hearing about the memories in the perfume infused cookbook from which it came.  Our host kitchen this month, Elizabeth of blog from OUR kitchen, remembered that her father in law used to have an orchard of walnuts up until recently.  If you have a love of walnuts, please bake along with us!  I think you could even get away with pecans, that would be fabulous.  If you do bake it, take a picture, post about it and email your results to our host kitchen before the 29th and you will be included in the Buddy round up.

Whisk together the milk powder and hot water.  Add in the butter, honey, salt and powdered ginger and whisk until the butter has melted and the honey is incorporated.  Add flours and chopped walnuts.  Rehydrate the yeast in the ¼ cup lukewarm water.  Make sure that the milk mixture has cooled to no more than body temperature and mix in the dissolved yeast.  Stir it all together with a wooden spoon to make a rough dough.

Knead by hand or with a stand mixer until the dough is smooth, elastic and no longer sticky.  (I left mine just slightly sticky.)

Cover the bowl and allow to proof in a draft-free area until the dough has doubled.

Turn out the dough onto a lightly floured board and divide in two. Roll each piece into a ball. Cover and allow to rest for 20 minutes. After resting, flatten each ball into a rectangular disc and evenly divide the walnut halves on top, pressing the nuts in slightly.  Roll each piece of dough to form a log. Join the ends to make a ring and place each log seam side down on the parchment paper. Cover and allow to rise in a draft-free area until the rings have almost doubled.  (First batch I followed these directions, second batch, I made a round disk and poked a wooden spoon through the middle to make a hole, then gently widened the hole.  Then I realized I couldn't exactly roll up the walnuts like a log.  So I flattened it again, keeping the hole in the middle, sprinkled on the walnuts and chopped dates this time and folded up the outside edges into the middle and sealed.  I ended up with a prettier ring, but less evenly dispersed filling.)  One suggestion is to place the loaf in a ring mold with walnuts along the bottom.  I pressed raw walnut halves firmly into the top of my ring before it rose and that worked beautifully.  They toast in the oven.

Just before putting the bread in the oven, spray the tops liberally with water. Put the bread into the oven and immediately turn the temp down to 350ºF. After 30 minutes, brush the tops of the loaves with milk or cream, then continue baking for about 10 more minutes until the loaves are nicely browned and have reached an internal temperature of 200-210ºF (the bread should sound hollow when tapped on the bottom). Remove the bread from the oven.

Allow the bread to cool completely on a wire rack before cutting into it.

This bread is dying for a spread of soft cheese and maybe a small slice of quince jam.

Oh, and do be careful when taking the bread out to glaze it because I swear it wants to try out for the Olympic diving team... 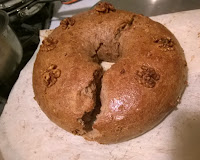