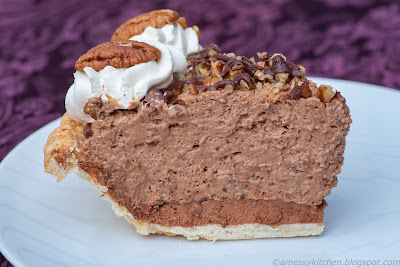 Happy Pi Day!  March 14th is a great excuse to invent a pie and this one is for you chocolate lovers.  This pie was inspired by a little dessert recipe clipped out of a 1938 newspaper.  In a nutshell, it's a chiffon recipe.  That's it, just a chiffon puff in a dish.  Well I instantly knew I wanted to transform it into a pie, I love making chiffon pies.  I upgraded the recipe a bit and reduced the sugar significantly, wow!  Usually chiffon pies call for folding whipped egg whites into a chilled filling.  This means either using the raw egg whites from the eggs in the recipe, or using using pasteurized or powdered whites and saving the fresh ones for something else or even throwing them out.  I used to go with the powdered option, but this time I tried a different method; making a swiss meringue to pasteurize the egg whites, not have anything go to waste, and still ward off the food safety police.  Add a little melt in your mouth whipped ganache layer, some whipped cream, and you have a light and creamy, yet seriously decadent dessert that will satisfy any sweet tooth.  You can make it 12-14 servings, but really one of 14 slices will still leave you fully satisfied if you don't scarf it down too fast! 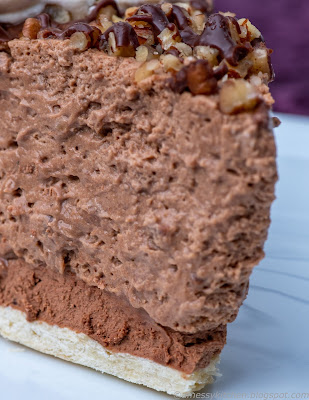 Set aside your pre-baked pie shell.


To make the ganache layer:

Place chocolate chips into a heat safe bowl and set aside.  Pour cream into a small saucepan and bring to a simmer over medium-low heat.  Do not boil.  Pour cream over chocolate and allow mixture to sit for 2 to 3 minutes.  Once chocolate has melted, add vanilla and salt and stir together until it incorporates into a smooth ganache.  Place into a bowl and let cool in the fridge for 1 hour or until you can spoon some out and it keeps its form.   Remove from refrigerator and spoon about ¾ of the ganache into a bowl.  Reserve the remaining ¼ portion for garnish.  Whip the chilled ganache with a mixer until light and fluffy and almost doubled in volume, 2-4 minutes.  Make sure not to over-whip the ganache or it will become grainy.   Spread evenly in the bottom of the baked pie shell.

For the chiffon cream filling:

Combine ¼ cup sugar and gelatin in a 2 Qt saucepan.  Blend egg yolks and milk together and add to sugar mixture along with chocolate.  Cook over medium heat, stirring constantly until chocolate is melted and mixture boils.  Remove from heat and stir in salt, Kahlua, vanilla and ½ cup roughly chopped pecans.  Chill in the refrigerator or an ice bath, stirring occasionally, until mixture thickens and mounds up slightly when dropped from a spoon.
Combine the egg whites, cream of tartar, and ½ cup sugar in a heat-proof mixing bowl. Whisk the mixture slightly, to break up the egg whites.  Set the bowl over a pot of barely simmering water on the stove.  Heat the mixture, whisking constantly, until the egg white mixture is hot to the touch and has reached 145º F (63º C) on an instant-read thermometer.  Immediately remove the bowl from the heat and whip with an electric mixer until the meringue forms medium-stiff glossy peaks.  Cool to room temperature and fold into custard.  Whip 1 cup heavy cream until stiff.  Fold into mixture.  Pile into the cooled pie shell, spreading over ganache layer.  Sprinkle with 1/3 cup chopped pecans.  Heat the reserved ganache in the microwave for 10-15 seconds or until melted again.  Spoon into a sandwich bag and snip off a tiny portion of the tip.  Pipe in swirls over the top of the pie or you may simply drizzle the melted ganache with a spoon.  Refrigerate while you make the topping.

Whip the remaining cup of cream with the powdered sugar until stiff peaks form.  (Stabilize with ¼ tsp gelatin dissolved in a bit of heated cream if desired.  Add at the soft peak stage.)  Scoop or pipe onto the edge of the pie as desired.  Place whole pecans on each of the swirls of whipped cream, or even spaced around the edge.  Refrigerate for a few hours to fully set. 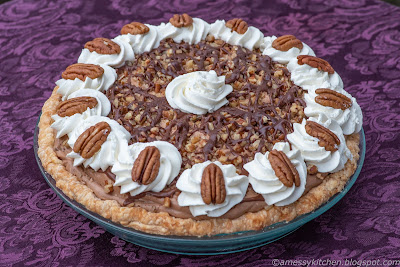 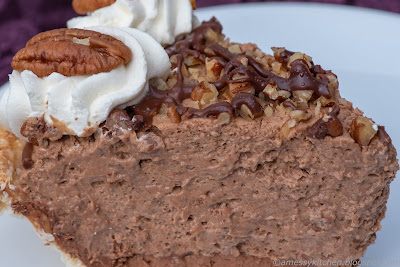 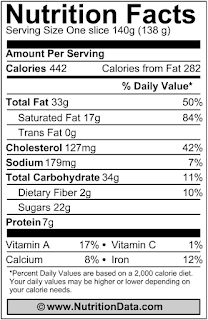