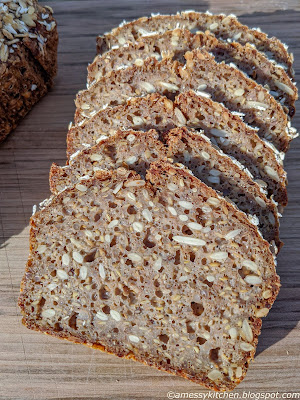 The BreadBakers challenge for this month takes us to those scenic fjords and vistas.  We were to bake Scandinavian bread, specifically something from any of the three traditional Scandinavian countries of Norway, Sweden, or Denmark.  Thank you to Felice of All That's Left Are The Crumbs for hosting!  I resisted the urge to go with my normal sweet fare and chose a highly seeded rye bread, Rugbrød that I had pinned a while ago.  I'm the only super seedy bread and rye lover in the house so this might not be seen again, but it was interesting to try!  I did some substitutions and some adjustments because I initially was going to use the weights in the original recipe, but realized they were WAY off and switched to volumetric and then weighed what I got.  I ground the rye fresh, and cracked it as well with my ♥#Mockmill.  In my opinion the amount of flax was too much.  I love a good flax sourdough, but I think the amount used made the crumb a bit gummy.  I would cut it in half.  Dry hard cider subbed for beer because I had it, and I used fresh kefir for the buttermilk.  Whoa, sour!  Definitely only go for 24 hours with homemade kefir in the mix!  Also ended up adding more flour because my dough was much soupier than what was pictured in the original post.  Oh yes, and I parboiled my whole rye to make sure it would be tender because I hadn't originally intended to let it go for 48 hours, which I did.  That's okay, bread is surprisingly flexible. 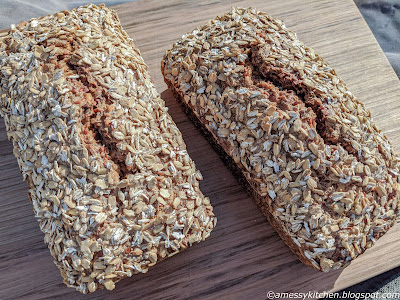 
Combine the yeast and sugar with the lukewarm water.  Mixture should be frothy after 10 minutes, if not, the yeast is expired.
Mix all the dry ingredients in the bowl of a stand mixer. Add the yeast mixture, beer and buttermilk, and stir to combine.
Fit the stand mixer with a dough hook and knead on the medium low speed for 10 minutes. The dough will be very sticky, slack and incapable of being shaped at this time.  (At this stage, my dough was still soup and so I added the extra flour.)
Scrape the dough into a very large non-metallic bowl with plenty of head space for the dough to bubble up). Cover loosely with plastic wrap and let rest at a warm room temperature for 24-48 hours, depending on how sour you want the bread to be.  Allow at least 24 hours to ensure enough of the liquid is absorbed. If letting it ferment for only 24 hours it is recommended to first soak the whole rye berries overnight before using them (drain thoroughly).
Line two 8x4-inch bread pans with parchment paper.  (The original post made one 9x5 loaf.  There is no way this amount of dough would have fit that for me, hence the two smaller loaves.) Preheat the oven to 350º F.
Divide the dough evenly between the lined bread pans, pressing down as needed.  Brush the tops with water and sprinkle over evenly with the rolled oats.
Bake on the middle rack for 100-120 minutes or until the center is done. For best and most accurate results use an instant read thermometer and aim for an internal temperature of at least 205º F.
Let the loaf cool for 5 minutes before removing it from the pan.  Cool completely before slicing. Keep stored in an airtight container.  Store unused portions in freezer to prolong shelf life. 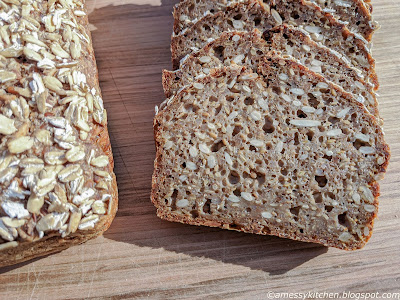 Be sure to check out our other scrumptious Scandinavian goods this month:
#BreadBakers is a group of bread loving bakers who get together once a month to bake bread with a common ingredient or theme. You can see all of our lovely bread by following our Pinterest board right here. Links are also updated each month on this home page.
We take turns hosting each month and choosing the theme/ingredient.