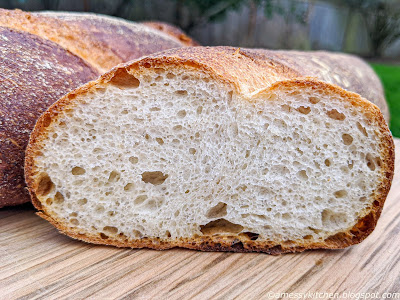 Happy 12th Anniversary to the Bread Baking Babes!  This month, the Babes have baked up a crusty, twisted loaf.  A very versatile and tasty country bread!  It is somewhat of a pseudo-sourdough as there is a small amount of yeast added.  What results is a loaf with a springy and chewy texture.  Brilliant for serving with soups or stews, toasting, snacking, etc.  A little history of the loaf from our host and the book French Regional Bread: "Le Tordu Du Gers et De Gascogne is a twisted bread, likely from the old provinces of Gascony and Guyenne, now in the Lot-et-Garonne. It owes its name to the fact that it is twisted into a corkscrew shape.  The tordu is described as having two, three or four grignes (little lips of raised crust) according to the number of twists it's given before being set to rise.


"The five-pound pain tordu was what people on farms used to eat after the war; there were a lot of large families and people ate a lot of bread, In the morning we used to cut it into small pieces and dip it in the vegetable soup.
At 10 o'clock we would eat it as a snack in the fields; and we would eat it with our midday meal and again in the evening.
At tea time, my friends and I used to love it rubbed with garlic, sprinkled with salt and dipped in groundnut oil, since in our region olive oil didn't exist."

I made one shorter batard, proofed in a lined banneton, and one longer one in a makeshift couche.  And while I was able to get more twists in the longer one, I could not cover it with a roasting lid for steam as is my preferred method for crispy, crusty loaves.  So I would stick to the stubby twist for my crust preference.  You can see below that though I still added steam to the oven with the longer loaf, the crust is more dull and has less developed color and texture than the shorter, roasting pan loaf.  While the original recipe was made for bakeries and had large quantities and long proofing times, I found that the loaf was ready to bake in around five hours with just little amounts of attention paid to it over that time.  The shaping actually caused me the most consternation, trying to get the twists to actually twist as I wanted them to twist.  I found this short video to be helpful in the shaping.  And speaking of the shaping, this technique is very similar to the fendu loaf, save for the twisting.  Very literal names, fendu meaning split and tordu meaning twisted.

I will definitely make this again, the loaf is a pleasure to eat and quite versatile in use.  (And both loaves sang to me when I took them out of the oven despite the different steam methods. ♥)  We had options for a pure white loaf and one that had a bit of rye in it.  I love rye, so I chose that option.  It's just a small amount and it still looks like a white loaf, but with fantastic flavor from that addition of rye and kamut that I used.  I just got new rye and it was interesting how much more plump this batch of rye berries looked than the batch I just used up.  I wonder whether it was due to variety or age or moisture content, home milling is so interesting!

We would love for you to join in as a buddy baker this month and enjoy this delicious bread!  You don't have to have a blog to participate, a picture will do. Just send a picture or your post of your finished loaf to Feeding My Enthusiasms by the 29th of this month. Be sure to put BBBuddy in the subject line. You will receive a Bread Baking Buddy graphic to keep or add to your post, and be included in our Buddy round up at the end of the month. New recipes are posted every month on the 16th. Check out our Facebook group to see the participants' baking results during that time.

Using a stand mixer fitted with a dough hook, mix the flours, water, and starter on med-low speed until just combined, about two minutes.  Cover and let the dough rest for 20 minutes.

Mix in the salt and yeast on low or medium speed for about 4 minutes to achieve a moderate level of gluten development. Cover and let proof at room temperature for 1½-2½ hours, folding every 30 minutes for the first 90 minutes.
Turn the dough out onto a lightly floured surface. Divide in two equal pieces and loosely shape them into balls. Sprinkle lightly with flour, cover loosely with plastic, and let rest for 15 minutes.


To shape the loaves:

Once the dough has rested, take one ball and fold it over to make an oblong shape.  Flour lightly, and with a narrow wooden rolling pin press down and roll in the middle lengthwise so that there are two long lengths separated by a thin sheet of dough. Turn it over, flour again, and press and roll to separate the two lengths well.  Now turn the dough on the diagonal, passing one roll over the other to make the corkscrew shape.  The length of the dough will control the number of twists that will fit along the tordu.  Place in a floured couche or linen-lined banneton.  Repeat with the remaining piece of dough.  Cover and proof at room temperature for about 1½ hours.

Preheat the oven to 475ºF and place a baking stone on the rack.  You will also need steam during the initial bake, so prepare for this now.  You can either use an oven safe bowl of hot water to add steam, or spray the inside of a roasting pan with water and place it over the loaf for the time needed.  Turn the proofed loaves onto a parchment lined peel or baking sheet.

Once the loaves are in the oven, turn the heat down to 450ºF.  Bake for 10 minutes with steam and another 20 minutes without steam.  The crust should be a deep golden brown.

Cool on a wire rack. Wait until completely cool to cut and eat. 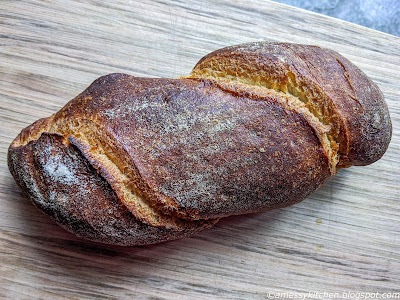 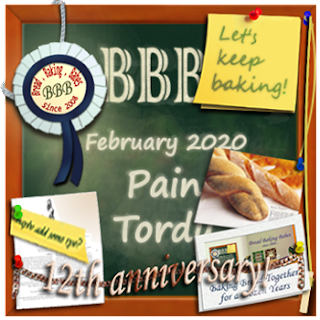