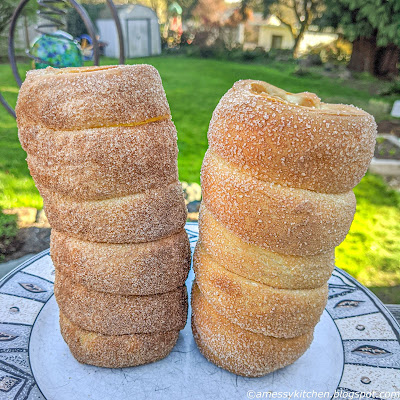 Oh wow, I really hope y'all have some flour available, because this bake is a real treat!  Kürtőskalács, or Chimney Cakes are a kind of Hungarian sweet yeast pastry cooked on a spit and were the choice of our host this month, My Diverse Kitchen.  According to Aparna, "Kalács means sweet pastry. These Chimney Cakes are more specific to Transylvania in Hungary and Szeklerland, the Hungarian-speaking region of Romania. They’re also known as Cozonac Secuiesc in Romania. Kürtőskalács can be found in other parts of Eorope. German-Saxons call this pastry Schornstein Kuchen. A variation that is baked without the caramelized sugar glaze is made the Czech Republic and Slovakia called Trdelník. It’s called Kurtoszkalacz in Poland."  Be sure to check out her post to hear more history on these awesome pastries.  Traditionally, each strip or rope is wrapped around a wooden dowel, brushed over with melted butter and rolled in granulated sugar. The dough encased dowels are turned and slow roasted over charcoal or in a specialized rotisserie machine until they turn crisp and a shiny golden brown. These treats can be further sprinkled with cinnamon, finely chopped nuts, chocolate, sprinkles, or a variety of toppings.  The pastries are typically eaten hollow, but the middle of the pastry can be filled with whipped cream if desired. The pastry is unraveled into strips and eaten. It is crunchy on the outside and soft and cake-like on the inside. They were originally made for special holidays and celebrations but today, are enjoyed as an everyday treat. You can find them in shops, on street corners, and at carnivals and fairs. 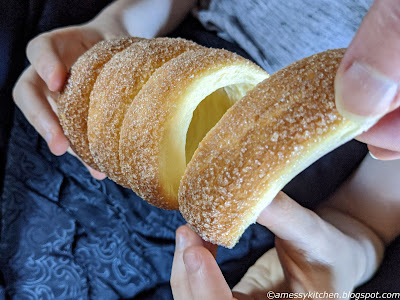 Oh my goodness, these are so good.  Golden and crispy sweet on the outside, delightfully soft in the middle.  If you like the middle parts of a cinnamon roll for their softness, you will likely love these.  My youngest preferred a plain sugar coating, while the rest of the family chose the cinnamon sugar option.  And I can now attest that these pastries reheat fantastically with just a 10-15 second burst in the microwave.  Oh, and the dough is beautifully soft too.

You will be seeing some innovative ways that our Bread Baking Babes came up with molds on which to form the chimneys.  Aparna used conical kulfi molds that worked beautifully!  I saved some tall, narrow soda cans to cover with foil, then I found an old rolling pin that could have been set to hang over the edges of a long pan or roaster.  Then I decided to take the easy way out.  I ordered a trdelnik form.  Ha!  Worked like a charm!  Though I did stuff the inside with parchment paper to insulate the middle a bit.  These wonderful pastries are normally formed on a wooden spit, like a rolling pin with extra long handles.  There is no heat on the inside, so they stay super soft and fluffy in the middle.  So I did my best to reduce the conduction of heat on the inside.  It must have worked because these were wonderfully soft and fluffy in the middle.  The very outside edges did get slightly more done on the inside, so I'm glad I stuffed the molds.  The other thing about this mold is that the cakes are baked horizontally and you are supposed to rotate them by a third, three times during the baking time.  The silicone ends have marks to show a perfect third rotation, I, II, and III.  If using an upright mold, you won't have to worry about rotating.  The traditional chimney cakes are baked in a rotisserie style baker made just for that purpose and rotate constantly. 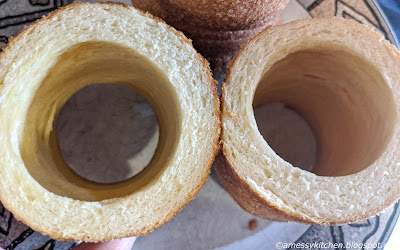 We tried a plain sugar coating and a cinnamon sugar coating before baking, as well as brushing a plain sugar cake with butter after baking and then rolling in cinnamon sugar.  Both are good, the sugaring before baking yields a less messy end product, whereas rolling in sugar after baking gives a treat more reminiscent of fair food.  Nice and sugary and messy.  Unless you want that extra mess and decadence, these are just lovely sticking to coating before baking.  I would suggest splitting one with someone and honestly there are three good servings in each of my chimneys, but I certainly won't tell anyone if you happen to demolish an entire chimney yourself, in one sitting. 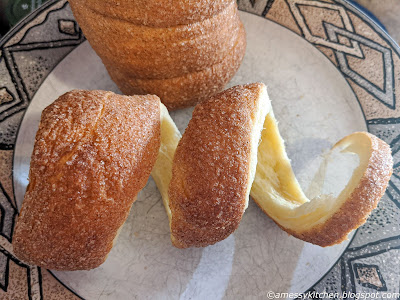 Now I assume the name chimney cakes came about because there is a cloud of steam released when the cakes are first removed from their molds.  It continues for just a minute until it cools sufficiently.  I did manage to catch some of it:


You simply must try out this delicious recipe!  Well, you don't have to, but you'll seriously be missing out if you don't.  You don't have to have a blog to participate, a picture will do. Just send a picture or your post of your finished loaf to our host kitchen by the 30th of this month.  You will receive a Bread Baking Buddy graphic to keep or add to your post, and be included in our Buddy round up at the end of the month.  New recipes are posted every month on the 16th. Check out our Facebook group to see the participants' baking results during that time.

Kürtőskalács or Chimney Cakes
makes ~4 chimneys or about 12 servings


2¾ cup all-purpose flour
1¼ tsp instant yeast (I used active dry yeast)
1/8 cup sugar
1 egg
1 tsp salt
70 g melted butter
¾ - 1 cup milk (70-80ºF) (I think I only used the ¾ cup amount)
more melted butter for brushing  (a generous 2 tbsp was sufficient for all four of my cakes)
sugar for sprinkling, or cinnamon sugar, or shredded coconut, or finely chopped nuts or anything else you would like to use to coat your Chimney Cakes
Molds to shape the chimney cakes

I started my dough with a sponge since I was worried about my yeast.  So I started my sponge with ½ cup of the flour, 1 tbsp of the sugar, the yeast, and ¼ cup of the milk.  I also added a spoonful of sourdough starter for good measure!  I let that proof for about 30 minutes until it was puffy.

Place the flour, yeast, sugar, egg, salt and butter into the bowl of a stand mixer. (I added the remaining ingredients to my sponge at this point.)  Add about half the milk and start kneading. Add more milk as required and knead dough until it is soft, smooth and elastic.


Shape dough into a ball and place back in bowl.  Cover and let rise for about 2 hours until it is double in size. 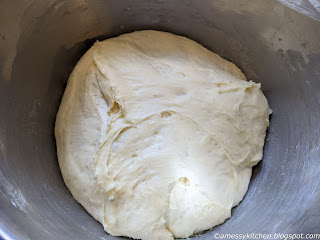 Deflate the dough and divide into two. Work with one portion at a time. Lightly dust your working surface with flour. Roll the dough out into a rectangle just under ½ cm thick. Cut into 1 cm wide strips lengthwise. (Based on the recipe amounts included in my mold directions, I figured I would have the right amount of dough to make four cakes.  The space in between the silicone caps is about 7" and it calls for making a rope of dough about 1 meter long.  So I aimed for that and rolled each quarter of dough out into ropes long enough to fit my mold.)


Tightly wrap the dough strips around the mold without gaps between strips, slightly stretching the dough to keep it thin, and tucking under the edges to seal. Lightly roll the wrapped mold on the counter to seal the edges of the strips/rope together.

Brush the surface of the dough lightly with melted butter. Dredge with sugar or cinnamon sugar to coat completely.  Place upright on a baking tray.  (If using a hollow mold, I recommend stuffing it with parchment or something to reduce the heat conduction to the inside.  Something oven safe, of course.)

Bake them at 190ºC (375ºF) for about 20 to 25 minutes till done, (21 for me), golden brown and sugar has caramelized. (If using a horizontal setup like a rolling pin, you will need to rotate the cakes periodically during baking.)  Take out of the oven and let it sit for 5 minutes. Using the blunt edge of a knife, slide the pastry off the molds.  (I let mine sit for a couple minutes, took one cap off and gave the cakes a good knock straight down onto the counter.  The chimneys released very well and let out their steam.)  Let them cool.  Repeat with remaining dough. 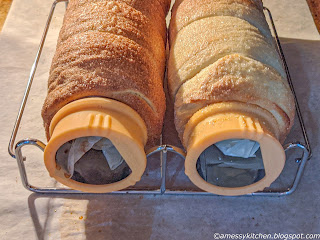 The pastry should be crunchy on the caramelized sugar outside and soft on the inside. Serve warm with coffee, tea or hot chocolate.  Try to share. 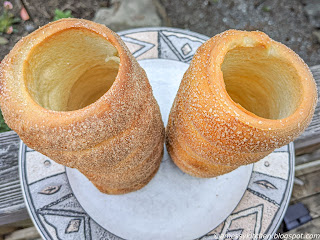 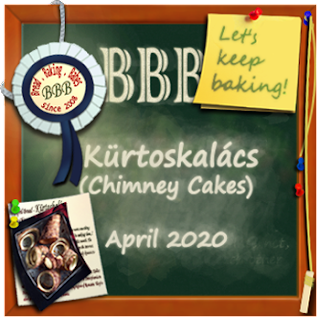