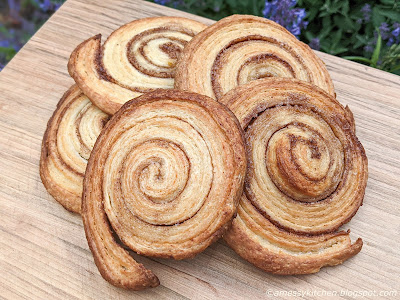 For this month's Breakfast Breads theme, hosted by Zesty South Indian Kitchen, I am making my own adaptation of a recipe that I had stuck on the back burner for more than a few years.  It looks like a palmier in the original recipe and I knew it would be tasty and rich, but I also was pretty sure it would not be as crispy as the name suggests just using an enriched brioche style dough and a few layers of butter and sugar.  Since I do want something more like a crispy puff pastry based Danish, I decided to use the good old morning bun technique on the dough and see how it turns out!

I found that pressing the crisps down too flat made them a bit less tender.  They remind me very much of pie cookies, or a cross between a pie cookie and a Danish.  I might add another ½ cup of butter to the batter to make them even more flaky next time, there is much less butter in this dough than the true morning bun dough.  But they are still very tasty, good reheated and good with a drizzle of icing glaze or cream cheese frosting à la cinnamon bun style.  The other nice thing is that the discs may be frozen ahead and baked a few at a time as needed.  That's good for portion control!

(I just tried making one of these straight from the freezer in the air fryer, no pressing down...  It turned out just delicious.  Definitely like a Danish.  300ºF for about 20 minutes, on a piece of foil.  What a treat.)

In a large zip top bag combine the flour, 2 tbsp sugar, lemon zest, mace, yeast, and salt.  Add the 1 cup chilled butter slices to bag and seal. Shake bag to coat butter. Press all the air out of the bag and seal.  Gently pound all over the bag to flatten all the chunks of butter.  Flip the bag over and repeat.  Be careful not to pound too hard close to the seal just in case it pops open.  Transfer flour mixture to a large bowl. Toss the flour and butter pieces and sheet any lumpy pieces with your fingers.  Combine sour cream, milk, and eggs in a 2-cup glass measure and mix with a fork to combine. Stir and fold into flour mixture until combined.

Turn the shaggy dough onto a floured counter and pat into a rough rectangle.  Using a bench scraper, bring up the sides and fold into the middle a couple times on each side, pressing down between folds.  Knead briefly to form a cohesive mixture. Roll the dough out into a 20x12-in rectangle. Starting at a short edge, roll the dough up into a tight cylinder. Flatten the roll by patting into a 12x4-in slab. Transfer to a parchment lined baking sheet and cover with plastic wrap. Freeze for 15 minutes.  Remove dough from freezer and place on lightly floured counter. 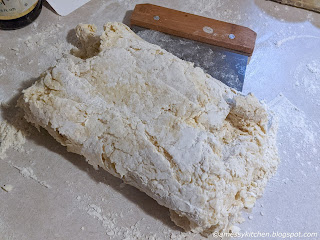 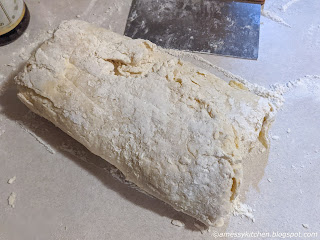 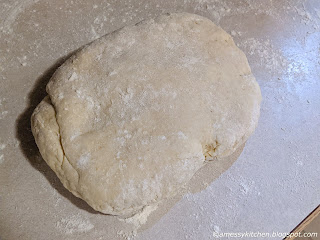 On a lightly floured surface, roll out dough into a large rectangle, about ¼-in. thick. Spread with 2 tablespoons butter and sprinkle with 1/3 cup sugar. 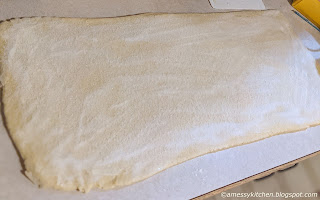 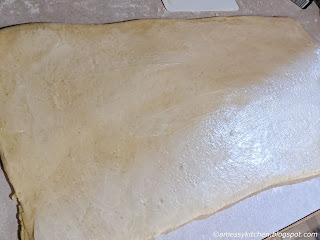 Combine the cinnamon and remaining sugar; sprinkle half over dough to within 1/4 in. of edges. Roll up tightly, starting with a short side; pinch to seal. Cut into 1/2-in. slices. 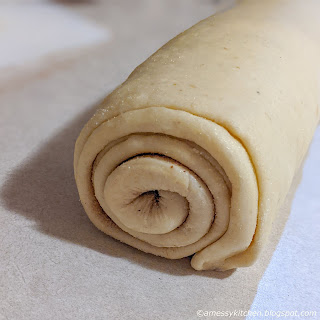 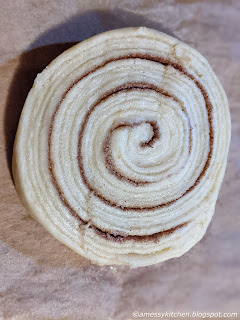 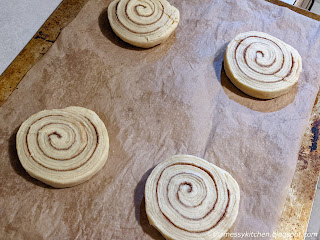 Place on greased baking sheets (four to six slices per sheet). Cover with waxed paper and flatten slightly with palm of hand. Sprinkle with remaining cinnamon-sugar. Let stand in a warm place for 30 minutes.  Bake at 400° for 12-15 minutes. (Baking longer, until quite golden, will yield a crispier pastry.) Immediately remove from pans to wire racks. 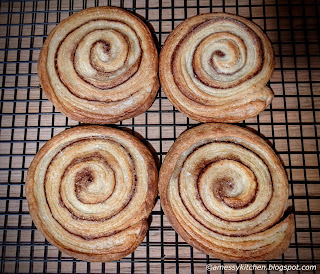 #BreadBakers is a group of bread loving bakers who get together once a month to bake bread with a common ingredient or theme. Follow our Pinterest board right here. Links are also updated each month on this home page.

We take turns hosting each month and choosing the theme/ingredient.  Be sure to check out our bounty of breakfast breads!