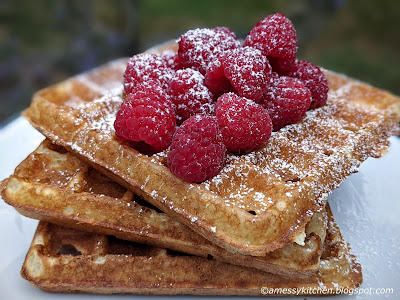 This is, hands down, my favorite way to wake up a sleepy starter.  It works with even long forgotten sludge that needs the hooch drained and the top grey portion scraped off.  Um, not that I ever let my precious and very forgiving starter get to that stage.  *cough*  The recipe is from Cultures for Health and though my starter was a local gift, I love this one possibly above all other sour dough recipes just for the unfed versatility and of course that it prevents wasting sourdough discard.  I usually make a half batch because I don't usually have larger quantities of starter.  This latest half batch used up all but a few tablespoons of my old, flat starter (no hooch), but after feeding it up, 24 hours later, the starter was fully risen up to the top of the crock.  I love this starter so much.  Here's a tip: if you don't use your sourdough regularly, don't feed it at 100% hydration.  Keep it much stiffer and it will slow the metabolism of the flour down and extend the healthy life of the wild yeast.  A liquid starter will suffer much more from neglect than a stiff one.  You can always feed up a portion to the proper hydration later.  I like to keep mine just thick enough that I can still stir it up and over in the crock with a wooden spoon, but not quite as dry as a dough, though that is a possibility for some recipes.  If I need to add a few more mLs or tbsp of liquid to my bread recipes to make up for my stiffer starter, that's just fine with me.  Bread is versatile and usually forgiving.
As for these delightful waffles, they are light as air with an old starter, wonderfully crispy with a sourdough tang, and slightly chewier with a more recently fed starter.  They are absolutely delicious with just about any starter.  Highly recommended recipe for any time and especially for using discard and waking up a starter.  I usually get around 10 or so waffles from a half batch with old starter, using a two square standard waffle maker, not Belgian style.
Sourdough Sour Cream Waffles
from Cultures for Health
2 eggs
2 cups discarded sourdough starter
1 Tbsp. vanilla extract
⅔ cup sour cream
2 Tbsp. melted butter
1 Tbsp. honey (or golden syrup or maple syrup)
1 tsp. baking powder
¼ tsp. sea salt
½ tsp. baking soda
Serve with your favorite toppings.