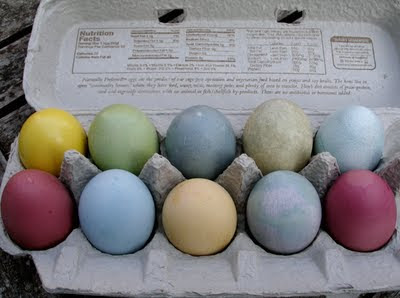 Since DD reacts poorly to artificial food dyes, I decided to go the natural route this year for coloring our Easter eggs.  Last year we didn't even get to do them at all.  :(  I know most of the dye stays on the shell anyway, but better safe than sorry.  And better fun with natural kitchen chemistry than boring little dye pellets.  One of my daughter's friends did the melted crayon eggs this year and those were pretty cool.  We may try that sometime too.  I tried a whole bunch of dye agents including turmeric, paprika, blueberries, red cabbage, grape juice, pomegranate  juice, beets, spinach and carrots among others.  Some worked okay, some were fabulous, some stunk, and some took a few tries.  I definitely love the turmeric for the yellow.  Spinach was a complete dud and not nearly strong enough.  (Though I have heard that people have had good results with chlorophyll tablets.)  For that lovely green egg on the top left, I used red cabbage, blueberries and turmeric.  Oh, that's one thing I learned: 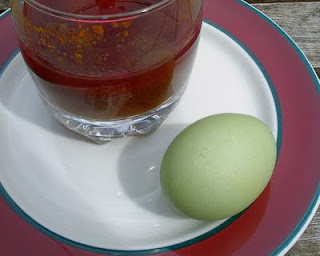 The color of the dye may have nothing in common with the finished product.  As it was, when I pulled this egg out to check for the first time, I was quite disappointed.  Then I gave it a rinse.  I could see the green developing and was happy to give it another half hour.  That's another lesson I kind of knew in advance.  Coloring with natural dyes takes much more time than with fake dyes.  I colored over the course of a few days.  It takes some trial and error.  I was looking at at least four different sites on natural egg colors, mixing and matching ideas.  Here are some of the things I tried and learned.

* you cannot rinse the beet dyed eggs or you will end up with mud.  Pink was the most difficult color for me.  Lift out the egg with a spoon and set to dry in the spoon for a while, then move to a napkin to finish drying once the top half is dry.  I wanted an intense color and left them in for a long time.  Shorter times would yield a lighter pink I'm sure.

All the rest of the eggs I rinsed.  That second green egg on the top was originally a pinkish lavender that dried to green.  Pomegranate results I think.  The little pale orange egg was originally turmeric and paprika and carrots but the orange didn't take and it was mostly yellow.  I gave it a few minutes in the beet dye to get it to the orange you see.  However, I know that onion skins will give a strong orange, deepening to sienna if you let it sit long enough.  I'll do that next year.  A perk to natural dyes is that you can sometimes scrub off the color if you don't like the results.  I had a few eggs that I tried multiple dyes on because the first ones failed.

In the end I think the most helpful site was the Martha Stewart one.  It was about the simplest and most straight forward with plenty of color options from the fewest mixes and the one I will reference from now on.  The only thing it forgot was to add the tablespoon of salt to each dye mix that was used in the show.  Helps the color.

So, now that I know my preferred dyes, I can take it up a level next year with marbling effects and stripes and maybe some silhouettes with onion skin wraps.  Did you try natural dyes this year?  How did they turn out?
at April 22, 2011