Brown eggs and natural dyes? Yes you can! 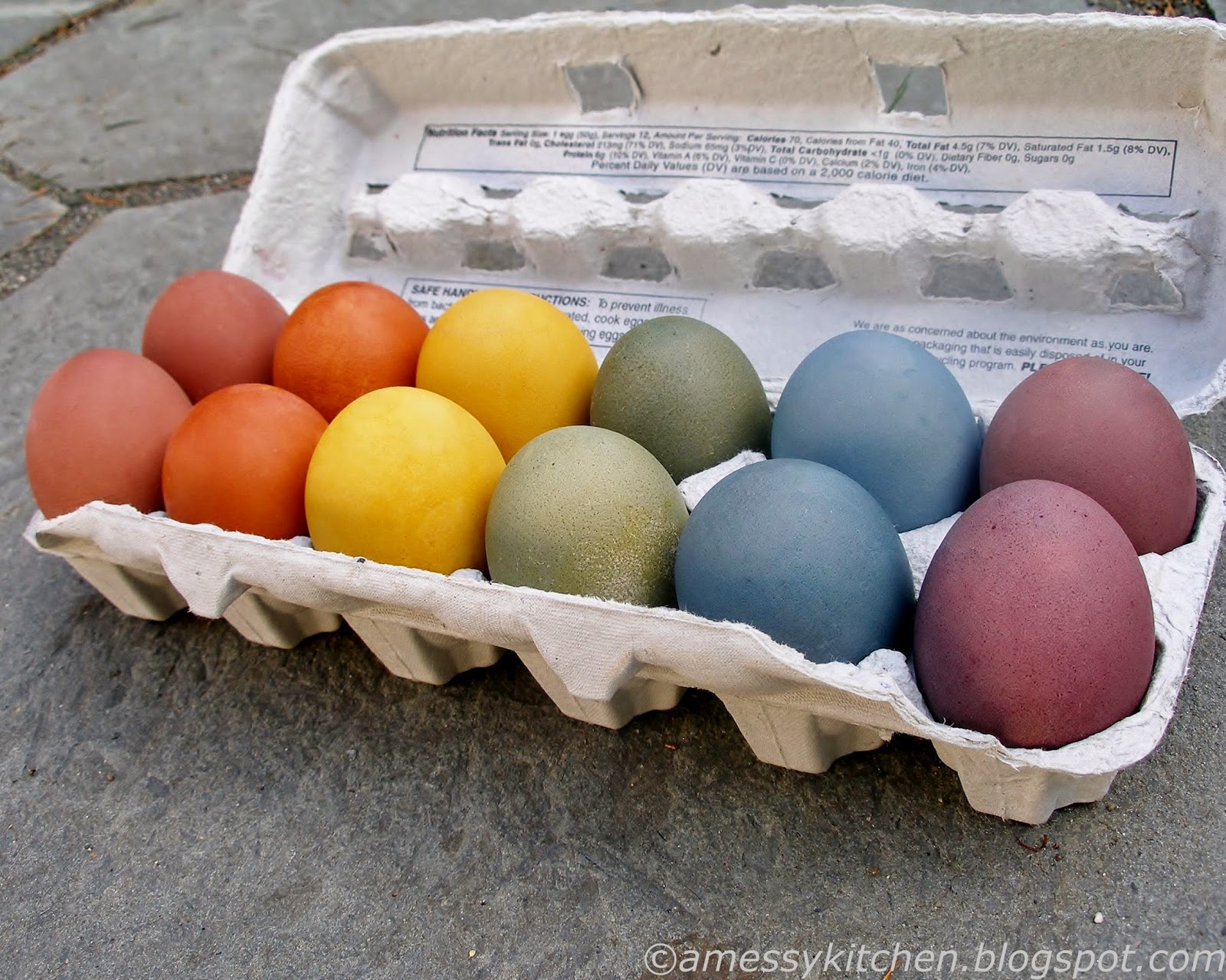 A couple years ago I did a post about natural Easter egg dyes.  They turned out great and only took a few hours of prep and soaking combined.  This week, a friend asked if the technique would work with brown eggs.  Good question.  I thought it would and since we always get pastured brown eggs from the farmer I figured I would try it out.  So here are my notes for doing brown eggs.

The method is the same.  Four cups of foodstuff chopped up (I used my food processor) into a quart of water, 3 tbsp for the turmeric which is dried spice.  Onion skins go a long way so you might even get away with 2 cups especially with the brown eggs.

To make the dyes, use 4 cups of chopped or grated (beets, cabbage, onion skins) with one quart of water and 2 tablespoons of vinegar.  Turmeric is 3 tbsp powdered spice per quart.  Bring to a boil, then cover and keep at a hard simmer for 30 minutes.  Strain the dye into a bowl and mix in 1 tablespoon of salt.  Let cool until not steaming, then soak your hard boiled eggs for 30 minutes in the dye.  For all colors except red, rinse and set on a napkin to dry.  The colors will intensify somewhat when dry.

One thing I added this year, mostly because they were freezer burned because R left them uncovered in a bowl in there for weeks, was ¾ cup frozen blueberries to the red cabbage mixture.  I wanted to boost the blue a bit for brown egg dying.

Big Tip #2:  Multiple coats are your friend for the reds.


So for the red/pink, I did the normal 30 minute soak and then took them out carefully to set on a napkin to dry.  Really, additional coats after that can just be dipped in to get the best coverage and set to dry again.  There will be a prettier side and a not so pretty side.  I reheated the dye when it cooled off and did a few more coats.  I think there were at least 10 dunks to get what you see in the picture, but it only takes a second to dunk and set out.  Remember not to rinse the reds or purples.

For the orange, I had enough dry onion skins to fill a 2 Qt pan.  Those eggs I only soaked for 10-15 minutes since the dye looked very concentrated.  You will want to check on them every 5 minutes or so after 10 minutes.

The yellow also only soaked for about 15 minutes.  These eggs you will want to rinse since the turmeric leaves a powdery residue.  Be careful!  Turmeric stains big time.

The green turned out a little different because I didn't mix the dyes like last time, I did a double soak.  First in blue, then in yellow.  I think I like the mix better, but I still got some nice mossy greens.  Those two eggs were different browns, the one in front a very light brown.  The one in back really took the blue dye more.

Blue was an easy and straight forward soak.  I gave it another 15 minutes with reheated dye to get them nice and saturated with color.

Lastly were the purples.  Starting with a nice saturated blue soak, then a shorter soak in the red and a few extra coats of red added on to dry.  Same technique as for the plain red.  No rinsing when done.

I think the brown eggs turned out great and actually look almost the same as the white eggs with natural dyes.  Perhaps a smidge darker and more of a saturated color effect.  They did take a little bit more time to get the results I wanted.  But I didn't have to worry about getting eggs I wouldn't normally buy.  So there you go.  If you want to try brown eggs for dying, it works just fine! 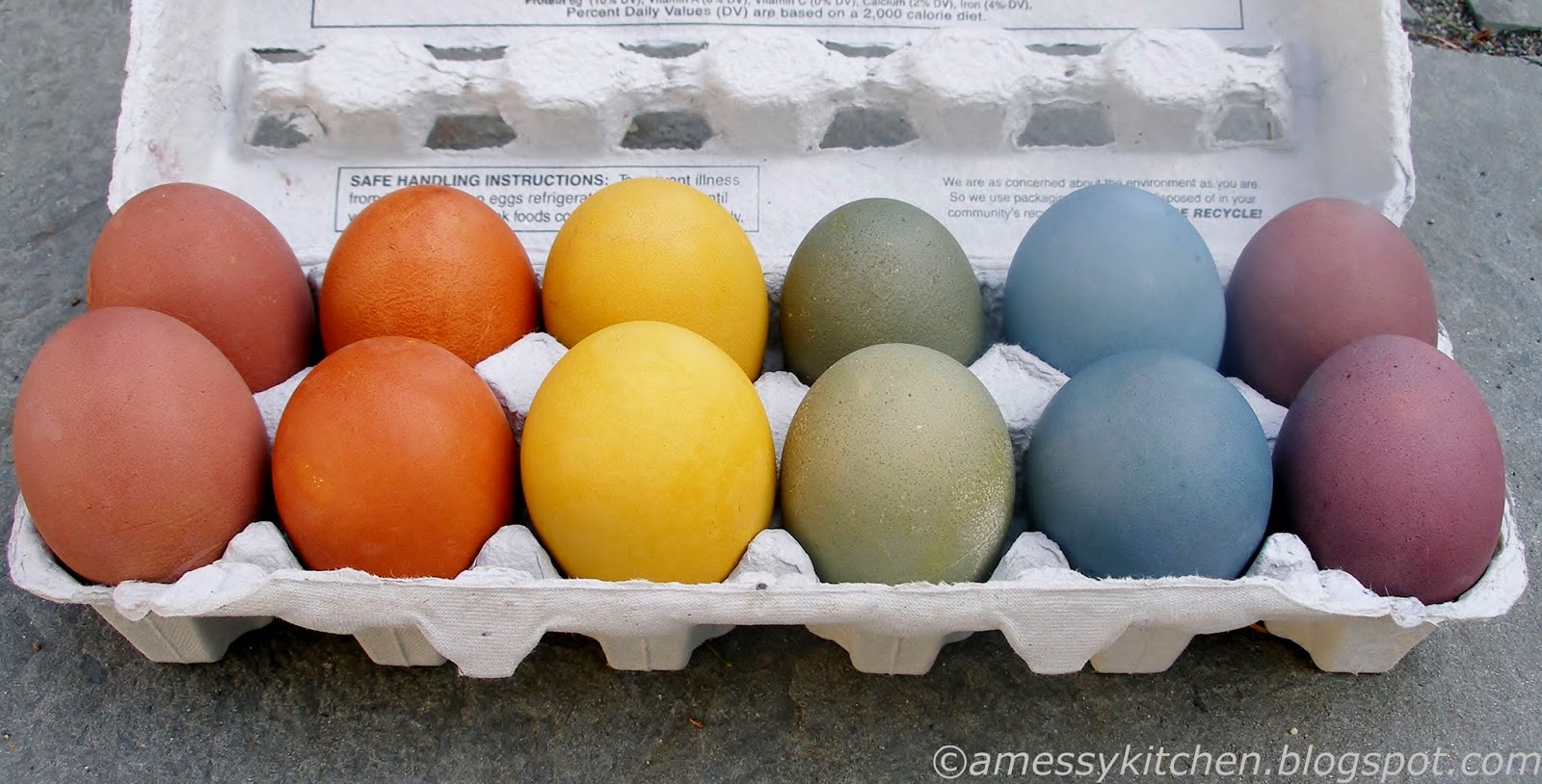 Oh yes, here are the eggs straight from the farm.  Occasionally there are some that are a bit lighter and I tried to choose the lightest ones for the green. 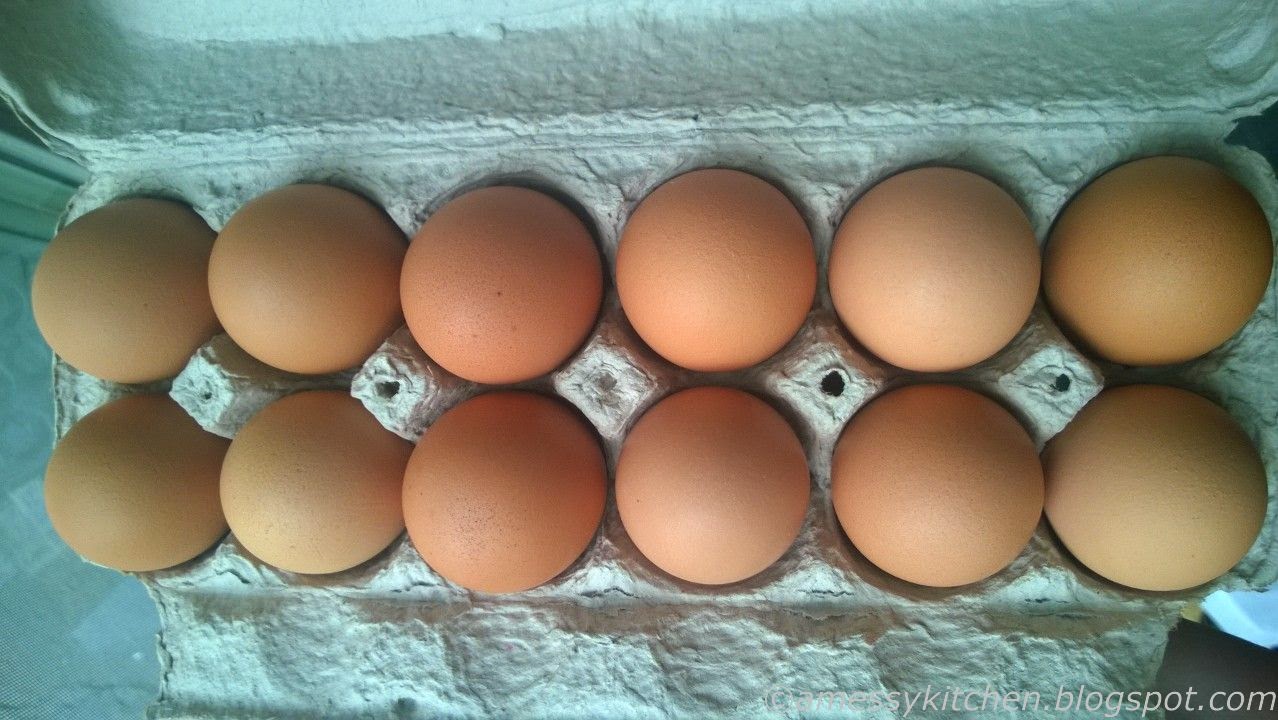