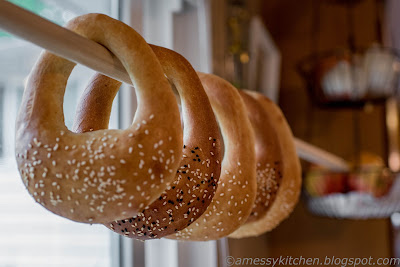 Our task this month is to bake a Lebanese street bread called Kaak.  It is a unique bread in that it is formed into the shape of a purse.  The vendors actually hang the breads by their handles and cut a pouch and fill them when purchased with either a za'atar paste or sprinkle, cream cheese spread, or sometimes something sweeter, for a portable lunch item. 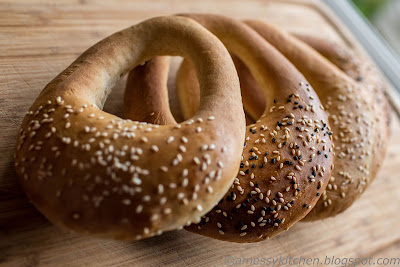 I think the authentic Kaak purses may turn out closer to a pita center, with a nice little pocket in the middle, but I made mini Kaak and didn't roll them as thin as I've now seen them done in Beirut.  They look wonderful!  But our version turns out great too and I suspect there is plenty of variation between bakeries there as well.  Some of the YouTube videos I watched had a nice soft, light center into which a pocket was cut, rather than just opened.  This was my first time tasting za'atar!  Loved it.  I had picked some up for a different recipe which I now cannot remember.  Isn't that just the way it always goes?  I made a little za'atar paste with olive oil and used it with some havarti cheese, which was the creamiest option I had at the time.  I think these would be great with Boursin too.  And hummus!  They would be outrageously good with hummus!  But I used up all my hummus two days ago.  Need to whip up a batch. 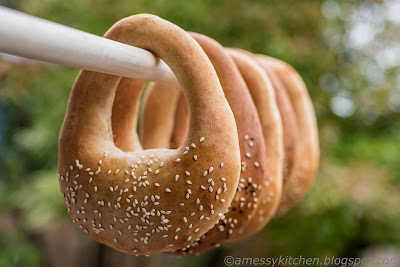 This is a fun bread to make, simple and tasty.  My kids gave it thumbs up too, just plain.  We'd love for you to try it out and share your results with us!  Check out the host kitchen's blog for the original post and pictures of her results.  You don't have to have a blog to participate, a picture will do.  Just send a picture or your post of your finished bread to the host kitchen by the 29th of this month.  You will receive a Bread Baking Buddy graphic to keep or add to your post, and be included in our Buddy round up at the end of the month.  New recipes are posted every month on the 16th.  Check out our Facebook group to see most of the Babes' baking results during that time.

In a bowl or a stand mixer, whisk together the flours, sugar, salt, and instant yeast.  Add the milk, water, and olive oil, and mix with the dough hook or large wooden spoon until you have a smooth dough, about 7 to 10 minutes or can no longer handle with the spoon. This is a sticky dough if you use all the water, so stretching and folding it in a large bowl a few times would be a helpful technique.
Lightly oil the dough and place the dough back into the bowl.  Cover and let rise until doubled, about 45 minutes to an hour. (This took 2 hours in my cold kitchen.)  Deflate the dough, give it a few more kneads, and let it rise a second time before proceeding to shaping.  This second rise will take only 45-55 minutes.
Line two half sheet pans with parchment paper, preheat your oven to 425º F.  This bread benefits from steam, so place a steam pan on the lowest rack of the oven (or use your favorite method for setting up your oven for steam).   I use a spray bottle and toss in some water onto the bottom of the oven when putting in the breads.

There are two methods for shaping this bread. One is to roll out the dough into a disk and use a biscuit cutter or glass to cut a hole to create the purse handle.  This leaves you with a little spare circle to bake, and is fine.  The method I used was to roll the dough out into a log, leaving the center thick and rolling the ends thinner.  The the ends and drawn up and together and sealed to form the handle of the purse.

Turn out the dough out onto a lightly floured work surface.  Divide the dough into 10 equal pieces, either by weight or just eyeball it.  (I made a half batch and formed five 115g balls by weight.) Form the pieces into balls by folding the dough over itself a few times. With floured hands, gently roll the dough into a short log.  Then roll the ends of the dough back and forth, outward, until they are skinnier than the middle. Pick up the log and place it on the parchment lined baking sheet, and curve the ends up to the top and pinch them together to form a purse shape.  If they aren't long enough, roll some more.  Pat the thicker part of the dough to flatten it to about ¾ inch thick.  (Methods vary on the thickness called for here.)  Cover loosely with plastic or a tea towel. Repeat with the remaining pieces of dough. There should be two to three purses per half sheet pan. 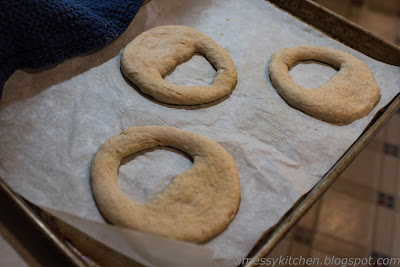 Whisk together the egg and water and set it aside. 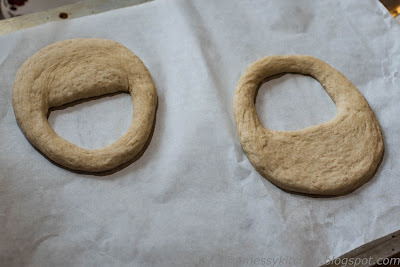 Let the loaves rise until puffy, about 20 to 30 minutes.
When the breads have puffed up, brush the large purse section with the egg wash and sprinkle with sesame seeds.  No need to brush the handles.  Add one cup of boiling water to the steam pan just before baking the bread.  Ice cubes work as well, or a spray bottle.
Bake the loaves, one pan at a time, for 10 to 15 minutes, until the bread is golden, and reaches an internal temperature of about 190-200º F.  Add more steam for each batch.
Cool the loaves on a wire rack for at least 10 minutes.  Fill with your desired seasoning or filling. 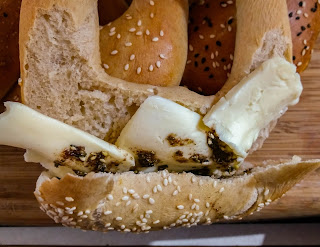 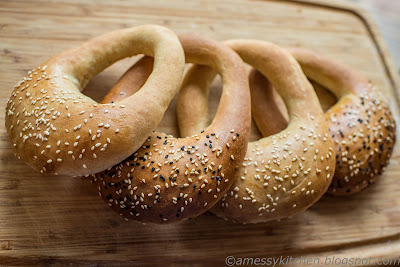 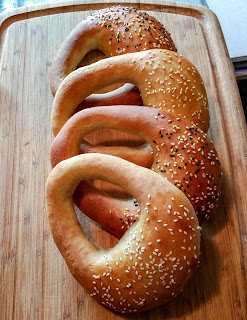 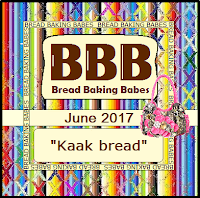 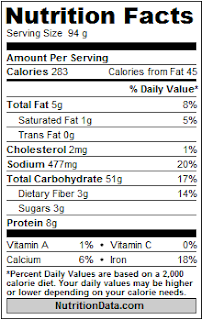