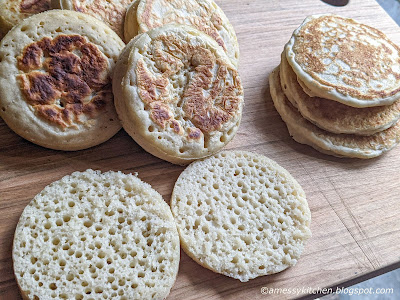 It's been a few decades years since I have been across the pond, but I still have a fondness for the idea of some traditional English foods.  (My Great-great-great Nana came from England through Ellis Island to be a nanny!)  So I was looking forward to trying out some English crumpets for our Bread Bakers griddle breads challenge, hosted by Snehas recipe.  So what is a crumpet anyway?  At its most basic, a crumpet is a soft and spongy yeast griddle cake.   It is not an English muffin, nor is it typically split open like one.  They are cooked in a ring to be tall and perfectly round, traditionally only on one side until done, and finished either by toasting or under a broiler, and served warm with butter and sometimes jam.  For convenience however, most people flip them and grill the top just enough to get a hint of golden color. 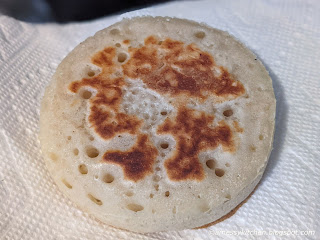 They have a characteristic flat top with many small pores and a spongy texture that allows the butter or other spreads to deliciously soak in.  Basically for me, crumpets are what happens when a buttermilk diner pancake and an English muffin have a baby.  English crumpets are made from a thick batter, not a dough, and actually were originally thinner and cooked like pancakes before rings came into the equation.  (Those ones are called pikelets and a great option if you get tired of using the rings.)  And I must say that pikelets, with some butter and Golden syrup, are amazing!

Some people like them just with butter, some with jam, some with savory toppings like cheese or eggs or even a full English breakfast!  Toppings are really limited only by your imagination.  I think they would be fabulous with poached eggs.  I typically like poached eggs on toast and Eggs Benedict on English muffins, but now I think Benedict on crumpets would be wonderful.  They are more tender than the muffin.  And is it sacrilegious to split a crumpet?  Perhaps.  I might get called out for it but I did try them both ways.  Being a Yank, I'm used to splitting my English muffins after all, which aren't even English though they were invented by an English immigrant who originally called them "toaster crumpets".  (The name English muffin wasn't used until 20 years after he started making them.)

I still need to find that sweet spot for the batter.  Too much batter and the crumpet won't cook through before the bottom is over browned.  Too thick or too thin batter consistency and the crumpet will be "blind" or gummy.  I was having lovely holes all through the middle and then the top would stay too runny and all the popping bubbles would flow back in instead of staying open on the ones I overfilled.  Also if the tops aren't set, they will fill any holes when you flip, if cooking that way.  They are tasty regardless, have lovely flavor and I ate too many the first day.  They do freeze well at least and I will enjoy them immensely over the next week.  Then practice some more!  And I must say, that while I love real maple syrup on pancakes, the golden syrup on the pikelets cannot be beat.  Wouldn't eat them any other way.
By the way, if you don't have crumpet or English muffin rings, I hear you can take both ends off of tuna fish cans and wash them well and that can work.  And in a pinch, you can fold layers of aluminum foil into a strip and secure with a paperclip or staple to create a makeshift ring.
Crumpets with Sourdough Discard

Whisk together the flour, yeast, sugar, and cream of tartar into a large bowl. Stir in the lukewarm water.   Stir in the sourdough starter to make a very thick but smooth batter.  Beat vigorously with a wooden spoon for two minutes. Cover the bowl and let stand in a warm spot until the batter rises and then falls, about 45 minutes to an hour.

Add the salt and beat the batter for about 1 minute. Cover the bowl and let stand in a warm spot for 15 to 20 minutes to rest.
Dissolve the baking soda in the lukewarm milk. Gently stir it into the batter. The batter should not be too stiff or your crumpets will be "blind" - without holes.  To avoid this, it is best to test one before cooking the whole batch. 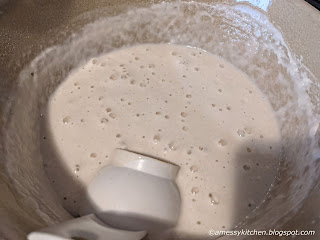 Heat a griddle or cast iron frying pan over moderately low heat for about 3 minutes until very hot. Place a well-greased crumpet ring on the griddle. Spoon or pour ~1/3 cup of the batter into the ring. (The amount of batter will depend on the size of your crumpet ring). 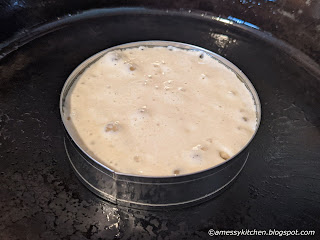 The batter should begin to form holes as soon as it is poured into the ring. If holes do not form, add a little more lukewarm water, one tablespoon at a time, to the batter in the bowl and test again. If the batter is too thin and runs out under the ring, gently add in a little more flour and try again. Once the batter is the proper consistency, continue cooking the crumpets in batches, three or four at a time. As soon as the top surface is set and covered with holes, about 7 to 8 minutes, the crumpet is ready to flip over.

To flip, carefully remove the ring with a towel or tongs, then turn the crumpet carefully with a spatula. The bottom, cooked side should be chestnut brown. Cook the second, holey side of the crumpet for 2 to 3 minutes, or until pale golden. The crumpets should be about ¾ inch thick.  Remove from the griddle and top with butter while still warm. Grease the crumpet rings well between each use.
*******
I did also try out King Arthur's "instant" Sourdough Crumpet recipe to see how they compared.  The verdict?  They do taste good.  A little finicky about the hydration, your starter really needs to be 100% hydration and I keep mine a little lower than that usually.  So I added just a half tsp of water to thin out just a little.  I only did a half batch of two crumpets.  Added another few drops of water to the second bit of dough but that made the inside a little gummy.  But are they crumpets?  Honestly, probably not.  They didn't taste the same, they tasted like crispy sourdough pancakes.  And the tops really did not want to set so I had to lose the top holes when flipping.  Absolutely fan-bloody-tastic with butter and golden syrup, though eldest prefers them with jam.  A great pancake option for those needing to go egg-free.  Would I make them again to use sourdough discard?  Yes.  I absolutely felt the need to split and toast based on the structure.
******* 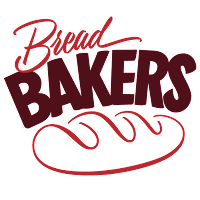 And don’t forget to check out all the amazing breads baked by our talented bakers.  Bread Baker's Event for March 2021-Theme Griddle Breads