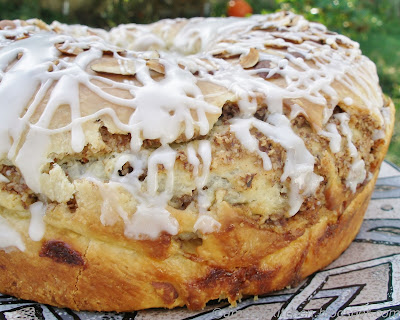 I put off making this month's buddy bread until we had company coming, so they could help eat all the scrumptiousness that is this recipe.  This awesome looking brioche coffee cake is supposed to be stirred together the night before and retarded in the fridge until morning to come together.  That's right, this beauty is no-knead.  But me being me, I couldn't follow it as written the first time.  I had to make some adjustments. 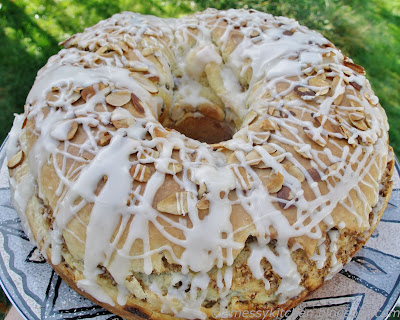 First for ingredients: I cut back on the butter by half a stick (¼ cup) since I was using whole milk.  I also used milk instead of the water since I use instant yeast and I definitely scalded the milk first.  And instead of four egg yolks, I used two yolks and one whole duck egg.  Since I had company I reversed the timing for the refrigeration.  Instead of mixing up the dough and leaving it to autolyse overnight, I let it sit at room temperature for about four hours and did a few folds every hour.  Wow, that dough was happy and fluffy by the last fold.  It rolled out like a dream, I filled it, formed it, covered it, and into the fridge it went. 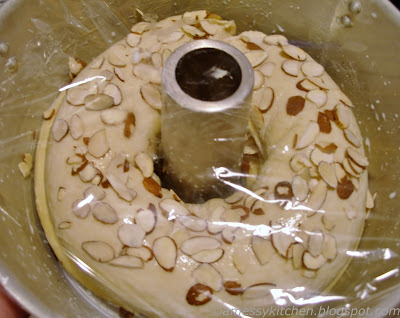 The only hitch the next morning was that it was taking too long to come to room temperature.  (Good thing they get up early and took it out at 6:50am.)  But by 8am my folks didn't want to wait any longer to bake it so it went into the oven cold.  I sprayed and steamed it a bit so it wouldn't set so early and it still came out beautiful, but it would have risen at least half again as much if it had gone in warmer. 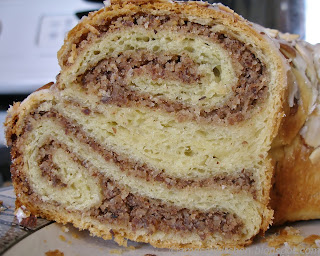 Still, it was fabulous and they laughed at my grumpiness for not having the total perfection I wanted.  The only change I would make again would be to bump up the salt to a full teaspoon.  I made my ¾ tsp generous because I felt like it wanted more, but we also like to slather good salted butter on our pastries.  I use celtic sea salt and I think it has more flavor but less saltiness than the refined sodium chloride of table salt.  So I tend to be generous with it in all my recipes.
I loved reading all the BBB's posts on this recipe, but loved in particular the host kitchen write up at Life's A Feast.  I don't care if you're Martha, we can all relate to things in the kitchen not going the way we expect or plan!  Here is the recipe to try out, as written in the host kitchen's post with  my changes in red.  It's pretty easy considering the no knead factor!  I sent some leftovers home with my folks and they will put them in the toaster oven and enjoy warm with butter.  Yum!

* Note that the dough rests in the refrigerator over night, so start the process the day before! If you are using European regular flour, start the basic dough with 3 cups (390 g) flour; if using American all-purpose flour, begin with 2 ½ cups (325 g) then add more as needed the second day when kneading the dough before rolling. I have given the original filling recipe as well as my own adjustments and changes below it.

You will need a stand mixer or beaters to whip egg whites for the meringue filling and a 10-inch (standard) tube pan, preferably with a removable center.

* when I measure flour I spoon lightly into the measuring cup and then level off so 1 cup usually weigh approximately 130 g: * see note above.

For the filling: (*see note above)


MY OWN CHANGES AND ADAPTATIONS TO THE FILLING:

The day before, prepare the dough:

In a large mixing bowl, dissolve the yeast in warm water; allow to activate for 10 – 15 minutes until foamy. Whisk in the tepid melted butter, warm milk, eggs yolks, sugar and salt and then stir in the flour. Beat or stir until smooth – the mixture will be sticky. Cover and refrigerate overnight.

The day of baking, prepare the filling:

In a small bowl, beat the egg whites on medium speed until soft peaks form. Gradually beat in 1 cup (or 2/3 cup following my changes) sugar, about 2 tablespoons at a time, on high speed until the sugar is incorporated and dissolved, leaving a thick, glossy meringue.

In a large bowl, combine the ground nuts, cinnamon and remaining sugar then stir in the milk until the dry ingredients are all moistened; fold in the meringue.

Grease/butter the bottom, sides and center tube of a 10-inch tube pan.

Divide the dough in half. On a well-floured work surface, roll each portion into an 18 x 12 –inch (45 x 30 cm) rectangle with the longer side perpendicular to your body (the longer edge lying on the cutting board left to right). Spread half of the filling evenly over each rectangle within 1/2 –inch (1 cm) of the edges. Lightly brush the farthest, top edge with milk. Roll each up jellyroll style, as tightly as possible, starting with the long side closest to you and rolling up; pinch seam to seal.

Cover the pan with plastic and allow to rise for 1 hour.

Once the coffee cake has risen, discard the plastic wrap and once again gently brush or dab the top surface all over with a bit of milk and add more slivered almonds where there are spaces.

Bake in the preheated oven for about 45 minutes or until puffed and golden brown. Remove from the oven and allow to cool for 10 minutes. After 10 minutes, loosen the coffee cake from the sides of the pan and lift out the center tube, placing the tube with the cake onto the rack to cool completely. Once cool enough to handle, loosen the cake from the bottom of the pan and around the tube using a long, thin blade and carefully invert, lift off the tube and flip back, top side up, onto a serving platter. Or lift off of the tube onto the serving platter. 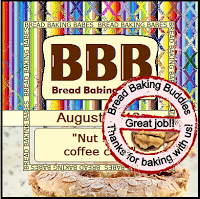 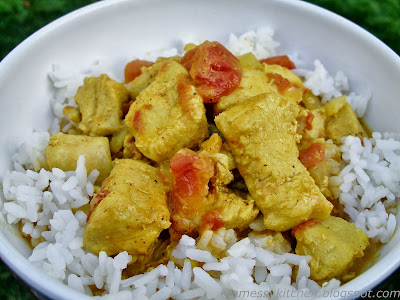 It's so gratifying to me to listen to my oldest prompt her little sister to eat, "Try it S, it's super yummy," when introducing a new meal.  In keeping with a recent upsurge in the use of coconut milk in the household, I decided on a chicken curry.  This turned out so well, with the sauce being almost like a delicious soup on its own.  The girls ate large portions with no prompting needed.  It always helps when they are hungry, but this smelled so good cooking up on the stove, I wasn't anticipating much protest in any case.  Even the hubby, who came home late and tried it cold, eagerly requested the leftovers sent to work for lunch.  The highest praise.  The spiciness and thickness of the sauce are completely adjustable to taste, depending on how much chili powder you add and how long you simmer.  Do keep it down to a simmer so as not to dry out the chicken.

Melt oil in a large pot over medium heat.  Add the onions, then the garlic and ginger and cook until softened but not brown.  Meanwhile cut the chicken into bite sized pieces and lightly season with salt.  Add to pan and saute for a few minutes to sear the chicken exterior.  Pour in all but two or three tablespoons of the coconut milk.  Mix the dry spices and salt into the reserved milk until there are no lumps, then mix into the chicken as well.  Add the drained tomatoes.  Bring to a boil, then lower temperature and simmer for about 15 minutes.  Taste and adjust salt and chili powder heat to desired level.  Simmer until the sauce is to your desired thickness.  Serve over rice.