Making Conchas with the BBB 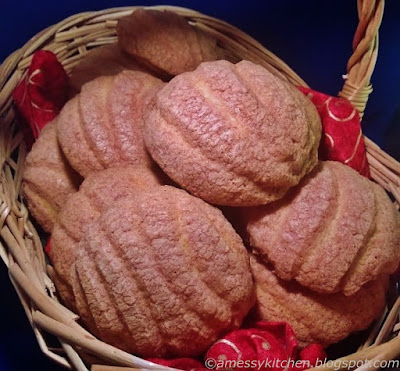 When I saw the challenge for this month, I knew I had to join in for this recipe.  (Hello, sweet tooth!)  I had made the Spanish ensaïmadas years ago and loved them, but this was my first Mexican bread.  These struck me more as a donut type texture than the super light and fluffy ensaïmadas, but then they are a sweet bread with twice as much sugar in the dough.  (And I forgot an egg.)  My eldest wanted to eat the whole batch and I had to quickly make them disappear though she heartily enjoyed another one for breakfast.  We decided on cinnamon for our sugar shell topping and loved it.  I added more cinnamon to taste with my eldest confirming it was good, but I might even double it next time because after baking it wasn't that strong and we love cinnamon! 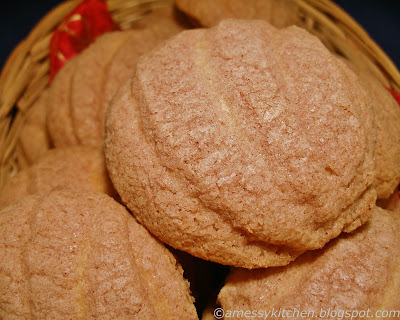 I added a handful of potato flakes to help keep the buns moist, since a heavily enriched dough like this will tend to dry out quickly and I knew it would take a while to eat up these sweet buns at a reasonable pace.  The fact that I forgot an egg didn't affect my buns as much because 1: I was using jumbo eggs already, and 2: I was using a large portion of spelt flour which requires less moisture than regular flour.  Dodged one there!  I meant to use half non-hydrogenated shortening and half butter for the shell, but the pantry was empty so all butter it was.  Do go and check out the host kitchen's post and also the links to all the other Babes' conchas at the bottom of the post.  You will want to eat these for breakfast lunch and dinner, but they do freeze and reheat beautifully.  The topping will not be as crisp depending on how you reheat but they are still delicious.  I recommend warming in a toaster oven to keep them like fresh baked.

For the dough:
392g (14 oz) bread flour + more as needed  (I used 100g all purpose, 265g white spelt and 35g sprouted spelt, + a handful of potato flakes)
2 large eggs  (My eggs were jumbo so I only used one which turned out perfect for the spelt) (Actually, I just forgot one and it still worked. ☺)
1 large egg yolk
¼ tsp fine salt (Bumped that up to a generous ½ tsp, would not use less)
7 g (¼ oz / 1 packet) active dry yeast (2 tsp instant yeast, rise time was very long - 3 tsp next time or osmotolerant might be a good option)
½ cup water, lukewarm
102 g (4 oz / 8 tbsp / 1 stick) unsalted butter, at soft room temperature
140 g (5 oz) superfine sugar (I only used 100g regular evaporated cane sugar and might reduce further.  Plenty of sweet in that topping.)

Add flour, eggs, egg yolk, and salt to a mixer set with the dough hook. Start the mixer at low speed. Meanwhile, add yeast to water and stir until creamy and well dissolved. Pour into the flour mixture and let mixer continue to work, now over medium speed, for 3-4 minutes.

Add the butter, and continue to beat for another 3-4 minutes. Lastly add the sugar, continue mixing for another 3 - 4 minutes or until the dough is gooey, sticky, elastic and very smooth.

Turn dough out of mixer, form into a slack ball and place in a greased bowl. (Mine certainly didn't need greasing with that nice buttery dough.)  Cover with plastic or a kitchen towel and let rise at a warm room temperature until doubled in size, 3-4 hours.  (5+ for a cold room!)

For the Sugar Topping: Cream the shortening (butter) and sugars together, then beat in the flour and salt; they will be crumbly. Use your hands to press the mixture together.  (I combined all the dry ingredients and then just cut in the butter with forks and then my fingers.)

Divide dough into thirds (~130 grams each third). If using matcha and cocoa, set one third aside (for white topping). Beat Matcha powder into another third (for green topping); set aside. Beat cocoa into final third (for brown/chocolate topping).  (Next time I would use a full tbsp cinnamon for one whole batch of topping.)

Assembly:
Line a baking sheet with parchment or grease with shortening or butter.  Rub a bit of butter onto your hands to make for easy rolling.  (My dough was of a consistency that was just sticky enough to roll beautifully without extra butter.)  Divide dough into 12 (16) equal pieces and form into balls. Then, slightly press them flat, as in a thick disk. Leave about 2 inches of space between each of the conchas so they will have room to expand.
Divide your sugar topping into 12 (16) equal pieces (same number as dough balls). Form each into a ball and flatten into a thin disk. Place a disk on top of each dough ball and lightly press down. The sugar should cover basically the whole surface - it will pull away from the edges as the dough rises.

Leave the prepared conchas in a warm area of your kitchen, uncovered, and let them rise again for about 2 hours, or until they've almost doubled in size.  (Mine did not rise or puff very much on the sheet, probably the spelt, but they spread and doubled in the oven to a nice, big palm sized bun.  I wouldn't want them any bigger!)
Preheat the oven to 350° F during last 15-20 minutes of rise time.  Slide the conchas into the oven and bake for about 20 minutes, or until the conchas are just golden around the edges and have puffed up.

Carefully remove to a wire rack to finish cooling. 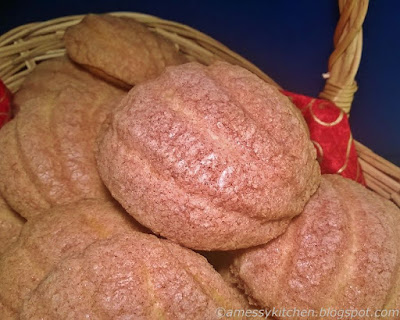 You could leave the matcha and cocoa out and have all white sugar shells. You could also add food coloring, cinnamon, or finely ground freeze-dried fruit to the sugar shell to color and/or flavor it.

Butter or margarine can be used in place of the shortening. 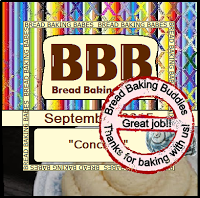 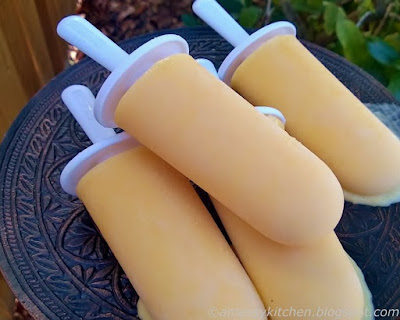 "This is delicious!  Can I have another one?"  That's what I like to hear about a new treat.  I was looking for a creamy frozen treat that wasn't one of our normal flavors.  My eldest likes mango but the youngest usually turns up her nose at purchased frozen treats that are mango flavored.  So I was very pleased when the latter devoured this pop and immediately requested another.  These are flavors I really like as well.  I have become enamored with fresh nutmeg in the past few years and will probably never use jarred ground nutmeg again.  It is much more complex and appealing in its freshly grated state.  BTW, nutmeg and citrus grate and zest beautifully with a microplane grater.  I recommend having at least a little one around if you have room and budget for one.  Crystallized ginger is also another treat that we love in baked goods and blends perfectly with mango.  An altogether tropical and sunny treat.

I may try this mixture in a quick freeze zoku mold at some point but I am not sure if it is too creamy to release.  In a traditional mold these have  the creamy and icy combination of the slower freezing method.  One way to combat iciness is to use juice concentrate rather than fresh juice, though I would cut down on the amount by a third or more.  Another is to make sure the mixture is completely chilled before putting in the freezer.  S totally didn't care how the texture was and it didn't last long enough for me to inquire.  Depending on the sweetness of the mangoes, these pops could be taken back to only 1-2 tbsp sugar and still be plenty sweet.  Remember that the frozen product will taste less sweet than the liquid mixture when you are tasting.
Creamy Mango Ice Pops
makes about 10 3-oz. pops

Place all ingredients in a blender and blend on high until smooth.  Pour into frozen pop molds of your choice.  If your mold does not have a cover to hold sticks, freeze the pops for an hour and then insert a popsicle stick into each mold.  Freeze until solid according to the mold directions, or overnight.  To remove pops, place mold briefly under warm running water.

Enjoy as a cooling summer treat, or a little bit of sunshine on a stick for the cooler months! 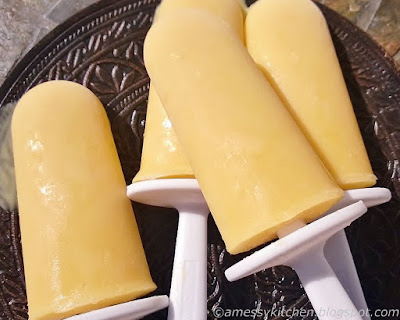