And the Crown goes to... The BBB - Happy 10th Anniversary! 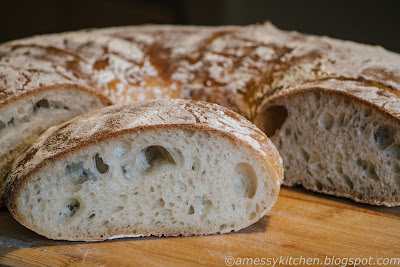 Our challenge this month, Royal Crown Tortano bread, celebrates the tenth anniversary of the Bread Baking Babes.  They began as a group of twelve women from around the world who came together to bake bread every month, inspired by the Daring Bakers, but a smaller, more intimate group.  This happens to be their very first challenge bread!  For me, this is the second anniversary of my officially joining as a member of the BBB, but I have been baking as a buddy often since January 2010, just a month before their own second anniversary.  Over the years, the roster has changed a bit, but always there is a love of baking and sharing.  There is something wonderful about being challenged to make things you wouldn't have thought of or necessarily chosen yourself, or possibly ever have heard of without such a diverse group of bakers.

This was an interesting, if soupy bread dough!  Last month I despaired of my bread soup dough, this month it was the desired result.  It takes a lot of kneading to get the gluten lined up in this wet dough, about 20 minutes for me.  I also used part spelt and a small portion of freshly ground sprouted kamut, which has wonderful flavor and color.  The dough expands during the fermentation and folding, but stays fairly flat while proofing.  It just kind of spread for me, but did pop in the oven a bit.  I had hoped for more, but that's why it calls for bread flour, the stronger gluten is helpful for a vertical rise in a dough this wet.  I did add a little more flour, which I should not have done.  Resist the temptation!  The dough will come together on a fast knead, then flow back down once the mixer is stopped.  It's fun to watch.  It actually reminds me very much of the Rewena Paraoa bread I made as a buddy back in 2011.  Very slack dough, potato, longer times, lots of flavor, shiny, moist crumb with big holes.  I mean, look at the shine on that crumb!  Absolutely delicious with a smear of butter.  This recipe is slightly different and has more salt, which I prefer, I remember thinking the rewena could have used more.  But altogether very similar. 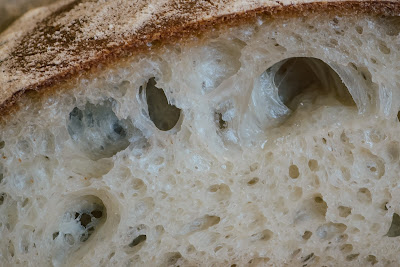 We would love to have you celebrate with us and try out this delicious bread!  While it is a very wet dough, there is not a lot of hands on time and it is surprisingly forgiving.  You don't have to have a blog to participate, a picture will do.  Just send a picture or your post of your finished bread to the host kitchen by the 29th of this month.  You will receive a Bread Baking Buddy graphic to keep or add to your post, and be included in our Buddy round up at the end of the month.  New recipes are posted every month on the 16th.  Check out our Facebook group to see the participants' baking results during that time.

Planning for this bread, it's a two day recipe:

The Night Before Baking: Make the starter and optionally, the mashed potato.

The Next Morning: Mix the dough and let it ferment for about 4 hours. Shape it, proof it for about 1 1/2 hours, and then bake the bread for about 45 minutes. 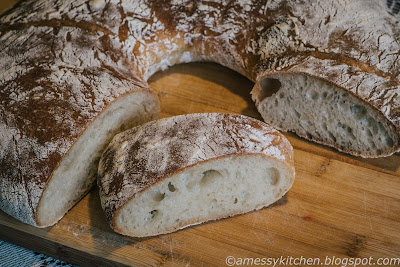 The Evening Before Baking: Making the Pre-Ferment:

Stir the yeast into the water and let it stand for 5-10 minutes. Add 1/3 cup of this yeasted water (discard the rest) to the flour and beat this very sticky starter until it is well combined. Cover with plastic wrap and let it ferment until it is full of huge bubbles and sharp tasting, about 12 hours. If your kitchen is very warm and the starter is fermenting very quickly, place it in the refrigerator after 3 hours of fermenting. In the morning, remove it and allow to come to room temperature for 30 minutes to an hour before beginning the final dough. 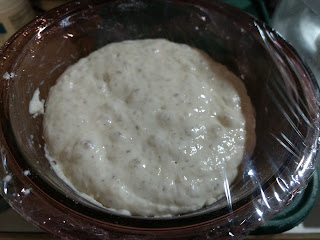 Preparing the Potato: For the sake of efficiency, you may want to prepare the potato the night before. Quarter and boil it in water until it can be easily pierced with a knife tip, about 20 minutes. Drain; if desired, reserve the water for the dough. Potato water is an excellent dough enhancer.  Press the potato through a ricer or sieve to puree it and remove the skin. Store it in a covered container in the refrigerator. You will need only ¼ cup puree for the dough.

Using a stand mixer: With your hands or a wooden spoon, mix the flour and water into a rough, very wet dough in the work bowl of your mixer.  Cover the dough and let it rest (autolyse) for 10 - 20 minutes.

Fit the mixer with the dough hook.  Add the pre-ferment, honey, potato and salt and the mix the dough on medium speed for 15 - 20 minutes, or until it becomes very silky and wraps around the hook and cleans the bowl before splattering back around the bowl.  This dough is almost slack enough to pour.

Fermenting and Turning the Dough:

With floured hands, shape the dough into a ball and roll it in flour.  Place it in a container at least 3 times its size and cover tightly with plastic wrap.  Let it ferment until doubled in bulk and filled with large air bubbles, about 4 hours.  During the first part of this time, using plenty of dusting flour, turn the dough 4 times in 20 minute intervals, that is, after 20, 40, 60, and 80 minutes of fermenting, the leave the dough undisturbed for the remaining time.  Do not allow this dough to over-ferment or ferment to the point of collapse, or the flavor and structure of your bread will suffer.

Shaping and Proofing the Dough:

Turn the fermented dough out onto a well floured work surface, round it and let it rest for 20 minutes. Sprinkle a couche or wooden board generously with flour. Slip a baking sheet under the couche if you are using one for support.

Sprinkle a generous amount of flour over the center of the ball. Push your fingers into the center to make a hole, the rotate your hand around the hole to widen it, making a large 4 inch opening. The bread should reach about 12 inches in diameter.

Place the dough smooth side down on the floured couche or board and dust the surface with more flour. Drape it with plastic wrap and let it proof until it is light and slowly springs back when lightly pressed, about 1½ hours.

Immediately after shaping the bread, arrange a rack on the oven's second to top shelf and place a baking stone on it. Clear away all the racks above the one being used. Preheat the oven to 450ºF (230ºC)  (I saw immediately that my stone was not large enough for my round, so I placed a baking sheet on top of it, hoping it would act like a baking steel.)

Unwrap the bread and flip it onto a floured peel or a sheet of parchment paper.  (Or both!)  Do not worry about damaging the bread as you handle it; it will recover in the oven as long as it is not over-proofed. (I think mine was a few minutes over-proofed, the kitchen got warm because I had been baking other things.)  Slash it with 4 radial cuts in the shape of a cross. Slide the loaf onto the hot baking stone and bake until it is very dark brown, 40 -50 minutes, rotating it halfway into the bake.  (I did add steam the first 5 minutes.)  Let the bread cool on a rack. 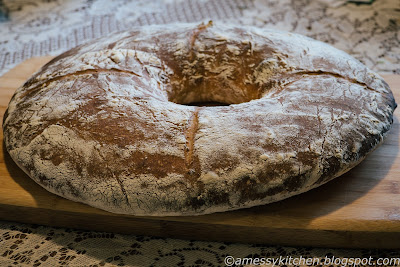 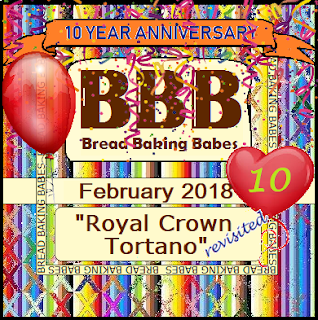