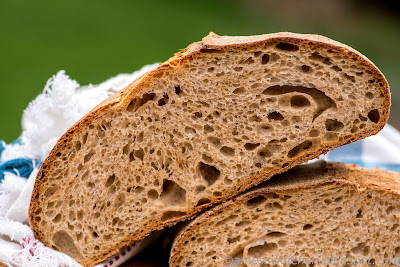 This month Elizabeth suggested we make a whole wheat sourdough after the fashion of Lariano bread, from a town outside of Rome.  True pane di Lariano is made using a particular wheat grown there that evidently has a dusky gray color and peculiar grit to it.  I used fresh ground red fife for my whole wheat portion.  I originally meant simply to use up the wheat I had because I had not been happy with it, but after tasting this bread, I may need to give it a second chance.  Perhaps it was my recipe and not the wheat!  As my timing was all messed up for this recipe, it was gratifying to hear that my crumb was as it should be for this loaf.  Indeed, I think I have not ended up with such a nice crumb for sourdough, let alone whole wheat sourdough before.
I began the leavener as I should but it did not float because I waited a bit too long the next morning.  So I gave it a little feed and waited another 45 minutes.  It just barely floated so I made the dough.  Got distracted after the first three folds and the last one didn't happen for another couple hours when it was too late to bake and too puffy to let it go at room temp overnight.  So I shaped the loaf, covered with a tea towel and wrapped it all plastic in a little fridge that runs warm.  It didn't really seem doubled the next morning, but I didn't want to over-prove as it was already puffy when I started.  (I had been gentle with the shaping and didn't deflate the dough that much.)  I gave it not too much time at room temp therefore, before slashing and spritzing well with water.  Baked it with steam for 15 and without for another 45.   It smelled absolutely delightful and rose sideways more than vertically.  I took it to share with family and everyone enjoyed it.  Just a light tang of sourdough with a lightly chewy crumb and crisp crust.  Of course it made phenomenal toast. 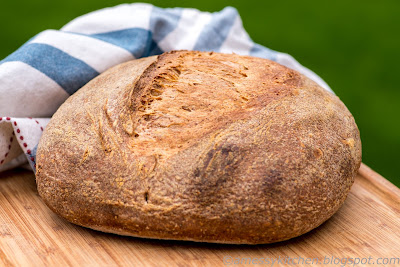 It is mostly definitely worth a bake and we would love for you to join in as a buddy baker this month! You don't have to have a blog to participate, a picture will do.  Just send a picture or your post of your finished bread to the host kitchen by the 29th of this month.  You will receive a Bread Baking Buddy graphic to keep or add to your post, and be included in our Buddy round up at the end of the month.  New recipes are posted every month on the 16th.  Check out our Facebook group to see the participants' baking results during that time. 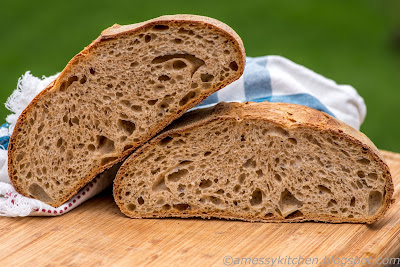 290g unbleached all purpose flour
100g whole wheat flour, sifted after weighing, save the bran (This was my fresh ground red fife)
10g flaxseed, finely ground (I ground golden flax in my spice grinder)
4g wheat germ (I used oat bran instead)
8g (1 tsp) fine sea salt (I first thought the dough tasted a bit much on the salt, but it was perfect after baking)
20g leavener (I used 30g - You can return the rest to your sourdough starter)
275g + 25g room temperature water
Rice flour for dusting the banneton or towel
Wheat bran for dusting the loaf (I used the bran I sifted out of my fresh wheat)

To make the stiff leavener:


Mix the water and starter in a small bowl.  Add the flour and the salt.  Using your hand, briefly knead the dough in the bowl to incorporate all of the ingredients. Cover the bowl with plastic wrap and let rise for 24 hours at room temperature, until tripled. When a small forkful of the leavener will float in a bowl of room temp water, it is ready to go.  If it doesn't, feed it a little more water and flour and give it half an hour, by which time it should be ready to go.

To make the bread:

In a large bowl, whisk together the flours, ground flax, and wheat germ (oat bran).  Pour in the 275g water and the leavener.  Mix with a dough whisk or wooden spoon until the flour is just incorporated.  Cover the bowl with plastic wrap and let rest for 30-40 minutes.  Now mix the salt with the remaining 25g water and work into the dough.
Over the next few hours, every 30 minutes, stretch-and-fold the dough over itself from all four "sides" until you have done this 4-5 times.  At this point, the dough is ready to shape. (Since I had a good two hours between my 3rd and 4th folds, my dough was quite aerated for the final fold!)
Line a banneton or bowl with a tea towel, and sprinkle it with rice flour or a mixture of wheat flour and rice flour.  Turn the dough out onto a lightly floured work surface, and shape it into a tight ball. Place the dough, seam side up, into the prepared banneton/bowl, and sprinkle with the reserved wheat bran.  Cover with plastic wrap and let rise until doubled, about 1½ to 3 hours.  (Because of my overnight retard in the fridge after shaping, I gave mine only 30 minutes at room temp before baking to avoid over proofing.)
Place a Dutch oven into the oven and preheat it to 450ºF.  Once the dough has doubled in size, remove the hot Dutch oven from the oven and remove the lid. Place a piece of parchment paper lined plate over the dough, and flip the dough over so that the bowl is upside down. Remove the bowl and the towel.  Using the parchment, lift the dough and place into the hot Dutch oven. Slash the dough in a triangle pattern, cover with the lid, and place the pan in the oven.  Turn the oven down to 400ºF.  (If you do not have a Dutch oven, you can bake on a stone or in a cast iron pan, and cover with a large stainless bowl or foil roaster.  I simply baked on a stone with steam.)
Bake for 30 minutes with the lid on. Remove the pan from the oven, transfer the loaf to a sheet pan, return it to the oven, and bake for another 15 to 25 minutes, until the loaf reaches an internal temperature of 205ºF and the crust is dark brown.

Cool the loaf on a wire rack for at least an hour before slicing.   Reheat to have it warm, but don't cut right after the initial bake, it is still finishing cooking! 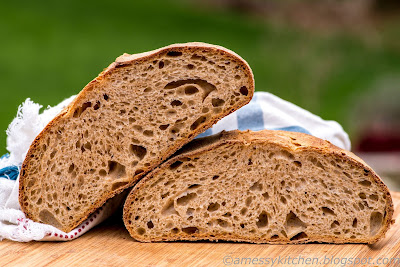 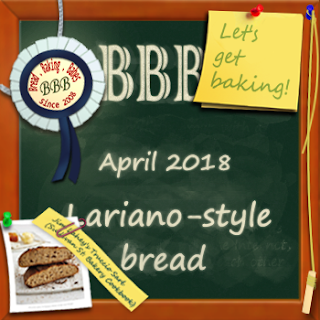