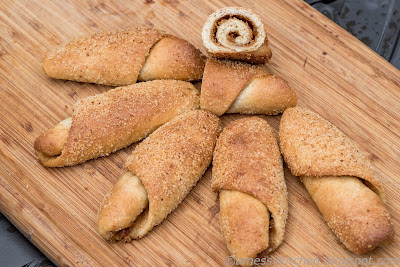 Our host kitchen this month chose a popular breakfast and afternoon snack bread in the Philippines, Spanish bread rolls.  They make use of breadcrumbs, both in the filling and topping with the option of using either melted butter and a filling sprinkle, or creaming the butter and filling ingredients together depending on which recipe you find.  I happily used up some remaining slices of sprouted sourdough bread I found in the freezer to make my crumbs and they were delicious!  It makes 16 rolls, which you can roll up in the traditional oblong jelly-roll fashion, or a more contemporary crescent roll style.  My crescents were so happy that most of them unrolled during baking!  There were a few that kept some of their curls. 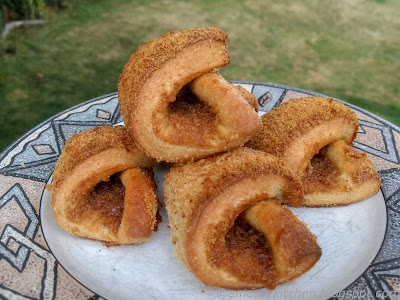 The rolls freeze beautifully, but you can make a half batch if you want.  We have been reheating them for school morning breakfasts and only have a couple left.  It's a very rich dough, like a brioche, and so they are very satisfying.  Evidently, cinnamon is not a traditional addition, the normal filling being just sugar and butter and breadcrumbs.  But we absolutely love cinnamon, so we did add just a touch to the filling.  We threw around the idea of savory versions of these, with a pesto or tapenade, or sundried tomato and feta type filling as well! 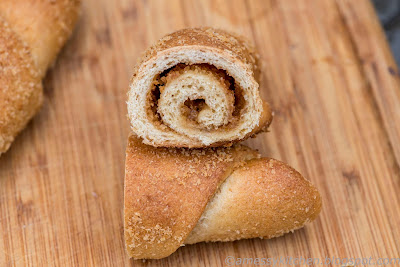 We would love for you to join in as a buddy baker this month! You don't have to have a blog to participate, a picture will do.  Just send a picture or your post of your finished bread to My Diverse Kitchen by the 29th of this month.  You will receive a Bread Baking Buddy graphic to keep or add to your post, and be included in our Buddy round up at the end of the month.  New recipes are posted every month on the 16th.  Check out our Facebook group to see the participants' baking results during that time. 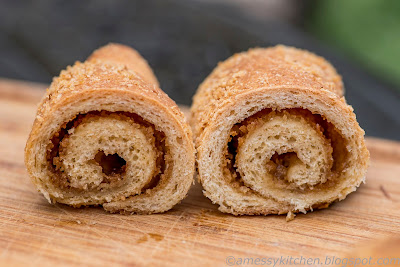 You can knead the dough by hand or machine.  Whisk together the flour, yeast, sugar and salt.  Add the milk, melted butter, eggs and yeast mixture and knead until you have a smooth and elastic dough. You may add a little more of flour or milk if you need it to achieve desired consistency of dough.  You know your dough has been kneaded enough when you can make a windowpane out of your dough.  (I gave mine a few folds while proofing as well.)

Cover loosely and let the dough rest for about 2 to 3 hours until it has doubled in volume.  Press down the dough gently and divide into two equal parts.

There are two ways of shaping Filipino Spanish Bread.  One is to roll out each portion into a round and spread with filling.  Then cut each circle into 8 triangles like a pizza and roll up croissant style.  The other is a more traditional way.  Divide each half of the dough into eight equal parts. Roll each piece into roughly a 3- by 5-inch rectangle.  Brush with melted butter, sprinkle with breadcrumbs and sugar (or cinnamon sugar if you prefer).  (Or use the creamed butter filling option.)  Roll the piece as you would a jelly roll, except starting from one corner and rolling towards the opposite corner.

If you don't want to roll out the pieces individually, roll each half the dough into a largish rectangle about 10” x 12”.  Brush the surface generously and completely with melted butter.  Sprinkle half the breadcrumbs and the cinnamon-sugar mixture over this evenly.   Now cut the dough into half lengthwise and into quarters width-wise to yield 8 rectangles about 5" x 3.

Which ever way you shape your rolls, place the pieces seam side down on a lined or greased baking sheet and pinch the seams so they don't unroll.  Let the shaped rolls rise for 30 minutes.

Brush them with a little milk and sprinkle with more breadcrumbs and sugar. You can also roll the shaped dough in the breadcrumbs and sugar if you like.  (I used plain fresh bread crumbs from an old loaf, no sugar, no milk, they stuck beautifully.  Might add a little sugar as listed next time since the expectation is for that crunchy topping to be sweet according to hubby.  But the kids loved them! ☺) 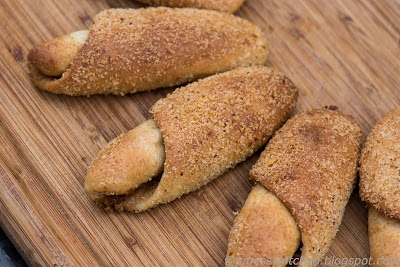 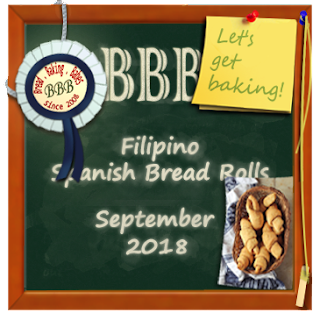 Approximate nutrition for one roll according to original recipe: 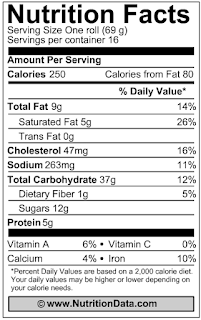