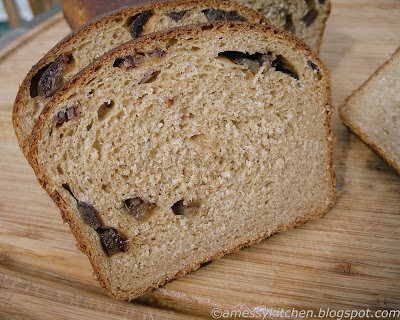 I laughed when I saw my title for our Bread Baking Babes recipe was BBB BBB.  It's kind of funny, right, or am I just too easily amused?  Well, our challenge was to go healthy this month.  Fiber and whole grains are a nutritional buzzword, pushed by doctors and the AHA for their health benefits.  However, they are not necessarily easy to eat.  I decided to make it easier on my tummy with all that whole wheat and bran, and did a soaked version.  Same recipe, slightly different method.  The soaking gives the phytase enzyme, already there in the grain, time to deactivate the enzyme inhibitors and phytic acid in the wholemeal flour that will bind minerals and prevent absorption.  It also makes the protein easier to digest and makes nutrients more bio-available than conventional short method baking.  My girls and I tested wheat sensitive, which is why I usually go with spelt or all purpose flour which has fewer of the reactive proteins.  But we can eat a soaked method loaf without a tummy ache.  Here's to traditional methods, I guess they knew what they were doing!  It also seems that the soaked method, for me, has been less likely to produce a brick.  You know, what people expect from a 100% whole wheat loaf:  a heavy, dense bread with perhaps a bitter flavor, and not the most palatable thing to eat.  Of course modern palates are not used to that flavor any more either.  I choose hard white wheat flour for that reason.  It is still 100% whole grain, but the flavor profile has less of that red wheat bitterness and its baking properties are closer to all purpose as well.  You can use orange juice to successfully offset and neutralize some of the whole wheat flavor in many recipes though. 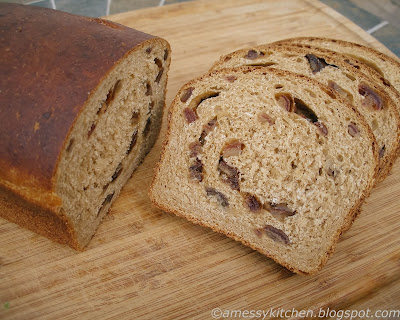 I did use a portion of wholemeal emmer flour that actually has a rather coarse grind and much darker color, but is not reactive to us because it is an ancient grain like spelt.  They're all related - spelt, emmer, farro, einkorn; early forms of wheat before the hybridization that has risen to our modern wheat.  The protein was not nearly as strong, which is why they can be tricky to work with if you're only used to all purpose flour.  The bran in whole grain flour also has a tendency to cut the gluten strands that give a loaf structure.  This is one of the reasons whole wheat bread tends to be heavy.  There are ways around that, such as sifting out the bran and adding it in later, proper hydration of the dough before kneading, folding instead of kneading, things like that.  I think that is why soaking helps lighten a whole meal loaf.  I used oat bran instead of wheat bran in my loaf and found that it does not absorb nearly as much water as wheat bran.  So I ended up having to add in another 100g flour and ¼ cup sprouted rolled oats to make up for the extra water I added for the bran.  I let the dough stay on the slightly sticky side, but it was still willing to mostly clean the edge of the mixing bowl.  On the next day, I added three additional folds to strengthen and align the gluten so it would be able to rise and give a nicer dome to the loaf.  Since I ended up with two loaves, I gave one to a friend for her family to try out.  They messaged me the next morning saying that they had really liked it and thank you!  Hooray, success!  I tried it toasted and it was very good.  My mom would really love this bread, especially since I used dates instead of raisins.  (Didn't have enough raisins.)  I made sandwich loaves, but the original recipe actually called for free form rounds.  Oops.  Turned out fine anyway. 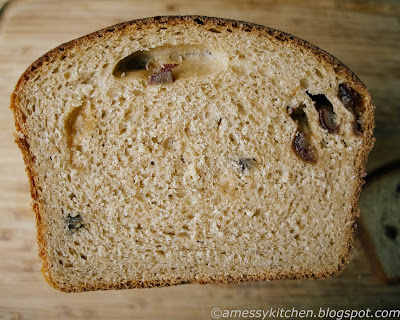 If you are hankering to try out a nice, healthy whole grain bread, please bake along with us!  You can try my soaked version, or go to the host kitchen at Notitie Van Lien to see the original.  Bake it and submit your picture and/or blog post to her by the 29th and you will get a Buddy Badge to display and be included in a buddy round up.

Combine flour, water, bran, malt or honey, butter, salt, and milk powder in the bowl of a stand mixer fitted with a dough hook.  Mix until fully incorporated and let rest for 10-15 minutes.  Check the consistency to see if it needs more water for the bran.  (Mine needed more flour because of the difference in absorption between oat and wheat bran.)  Mix until the dough starts to clean the edges of the bowl and pull away.  It should still be slightly sticky but more interested in sticking to itself than a finger.  Cover the bowl with plastic wrap and leave at room temperature until next day.

The next day, dissolve yeast in a small dish with a tbsp water and ½ tsp honey until foamy.  Mix into the dough on low speed until evenly incorporated and dough pulls away from edges again.  Cover and let rest for 30 minutes.  Turn out onto a floured board and press out and gently pull into a rectangle.  (For me, the dough was slightly slack but not too sticky with a floured board.)  Fold in long edges to the center, turn and press down slightly, then fold in the other edges again to the center.  Place, seam side down, in the bowl again.  Repeat this twice more for a total of three folds.

Divide the dough and dates in two and place one dough back in the bowl.  Give the first dough another fold, then roll out into a rectangle, 8 inches wide.  Sprinkle with 2/3 of the chopped dates for that loaf.  Lightly press them down and fold the dough in half.  Gently roll it out again and sprinkle evenly with the remaining dates for that loaf.  Roll up the dough, jelly roll style and pinch the seam together.  Place seam side down in a buttered 8x4" loaf pan.  Cover.  Repeat with remaining dough and dates.

Preheat oven to 400º F.  Let loaves rise, covered, until dough has crested the edge of the pan by about ½-¾".  These are not huge loaves.  Throw some steam on for the first 5-10 minutes if desired.  (Heat a metal tin in the oven while preheating and toss some water in it and quickly close the door.)  Bake for around 30 minutes until well browned and done.  (At least 190-200ºF internal temp.)  You may turn down the heat to 350º during the last 5-10 minutes of baking, or tent with foil if the crust is getting too dark.  Turn out the loaves to cool on a rack.  Make sure the bread has completely cooled before slicing. 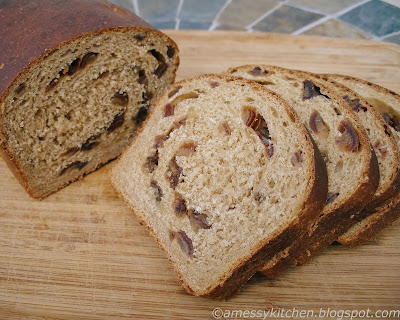