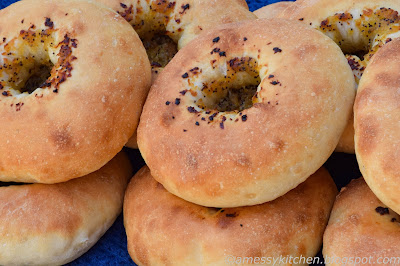 Our challenge this month comes from Poland!  I've never been to New York much less Poland, or anywhere you might find a bialy, so this was my first exposure to these oniony delights.  You might liken it somewhat to an onion bagel, but that would be selling it quite short.  My prejudice against bagels is that they are too dense and chewy.  Almost universally hard on the jaw from my experience.  Bagels are boiled and then baked, which is what gives them their characteristic shiny crust.  Bagels and bialys are both Polish pastries, but the bialy is baked only, and has less flour.  This gives it a matte crust and a lighter texture, though it is still nicely chewy.  It also has a depression instead of a hole.  This is almost always filled with onions, garlic, poppy seed, breadcrumbs, or some combination thereof. 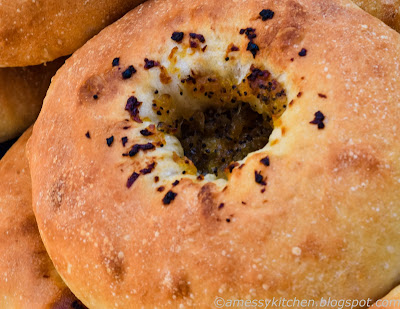 My variation was traditional onion and poppy seed and based largely on the classic bialys recipe posted by King Arthur.  I used half all purpose flour and half light spelt flour, plus a bit of sourdough starter.  Delightful flavor and texture.  It was absolutely stellar dipped in our stew for lunch!  My youngest really liked the bread, but not the filling, so when I found cast off bits of bialy that had filling touching them from the ones she had been sneaking, I banned her from the bread board and made them disappear.  Really, imagine not liking caramelized onions, whose child is this?!  Maybe it was the poppy seeds.  If I left them plain or tried breadcrumbs, I'm sure she would be noshing on these constantly.  My kids have always liked chewy breads.  Eldest raved about them, especially after dipping in the stew gravy. 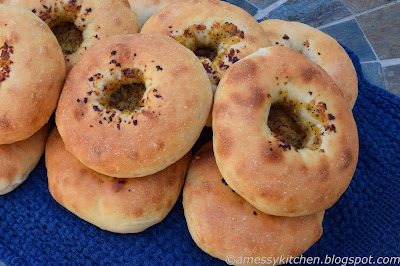 To see the variations presented by the host kitchen, go to judy's gross eats.  She tested two versions, one with a sourdough starter/poolish, and one with a preferment.   My version utilized an overnight rise in the fridge, and it filled my stand mixer bowl by morning.  These won't last quite as long as bagels, but they freeze and reheat wonderfully and are supposedly great split and toasted with butter.  As to whether to eat around the filling and save it for last, or dig straight in, I ripped mine apart and savored the filling part first, then enjoyed the chewy roll part.  We would love for you to bake along with us this month!  Just pick a day or two between now and the 29th to bake them up, then send an email to our host kitchen with your post and/or picture to be included in the buddy round-up.

For the dough:  Combine the flour, salt, yeast, and onion powder in the bowl of a stand mixer.  With a dough hook, add the water (and sourdough starter) and mix until just combined, 1 or 2 minutes at low speed.  Stop the mixer and let sit for 20 minutes, covered. (This is perfect treatment for spelt flour)

Now uncover the bowl and knead at medium speed for 4-8 minutes, or until the dough is smooth and elastic.  (Less time for spelt, longer for all purpose.)

Cover and refrigerate the dough overnight for a slow rise that will develop the dough's flavor.

(Start the filling before taking the dough out of the fridge.)
Next day, divide the dough into 12 pieces (I divided mine by weight) and round each into a ball.  Place on a lightly oiled baking sheet or oiled parchment, cover with greased plastic wrap, and let rise at room temperature for 1 hour or until puffy.

For the filling:  Pulse the onion in a food processor or blender until very finely chopped, but not liquid.  Mix in the poppy seed, salt, and pepper.  Heat the oil in a saucepan and cook the onion mixture for a few minutes over medium-low heat until the liquid cooks off and the onion is very slightly caramelized.  (A few minutes is simply not correct, this took at least 40 minutes for me and much more oil to help the onions move and caramelize, even after moving the heat closer to medium.)  Remove from heat and allow to cool.  (This is why you start it before taking out the dough, so you don't burn your fingers filling the first batch with your just caramelized onion mixture!) 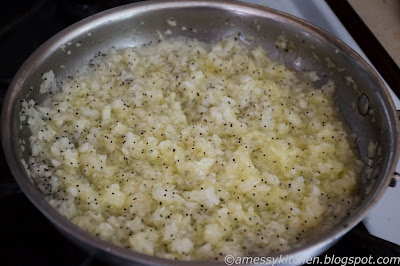 To shape and bake: Lightly sprinkle 2 baking sheets with farina or cornmeal, or line with parchment paper.  Take each dough ball and stretch it into a bagel shape about 6" to 7" in diameter, without puncturing the center, and leaving a wide, flat indentation where the hole would be. Place a few inches apart on the prepared baking sheets, 6 per pan. 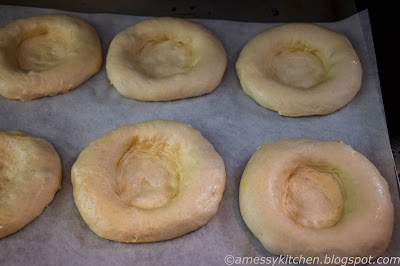 Place a scant teaspoon of the onion filling in the indentation and spread it out with your fingers. Don't overfill; a little goes a long way.  (I technically used a bit too much with a generous tsp instead of a scant one.) 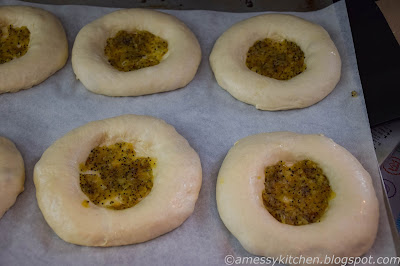 Bake for 8 to 10 minutes, until light golden brown. Remove the bialys from the oven and serve warm, or cool on a rack and save for toasting later. 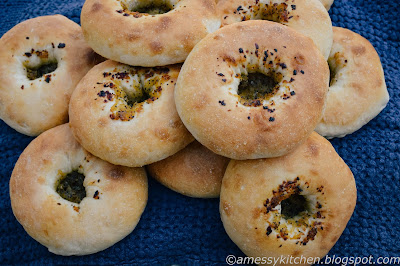 A little tip from the bakers at King Arthur:  "Resist the temptation to be generous with the onions: the moisture in them can keep the center of the bialy from cooking at the same speed as the edges, causing the center to puff up like a topknot."

(My youngest happily ate an entire reheated bialy today, after I had scraped the filling out.  Oy vey.)
at July 16, 2016 9 comments: