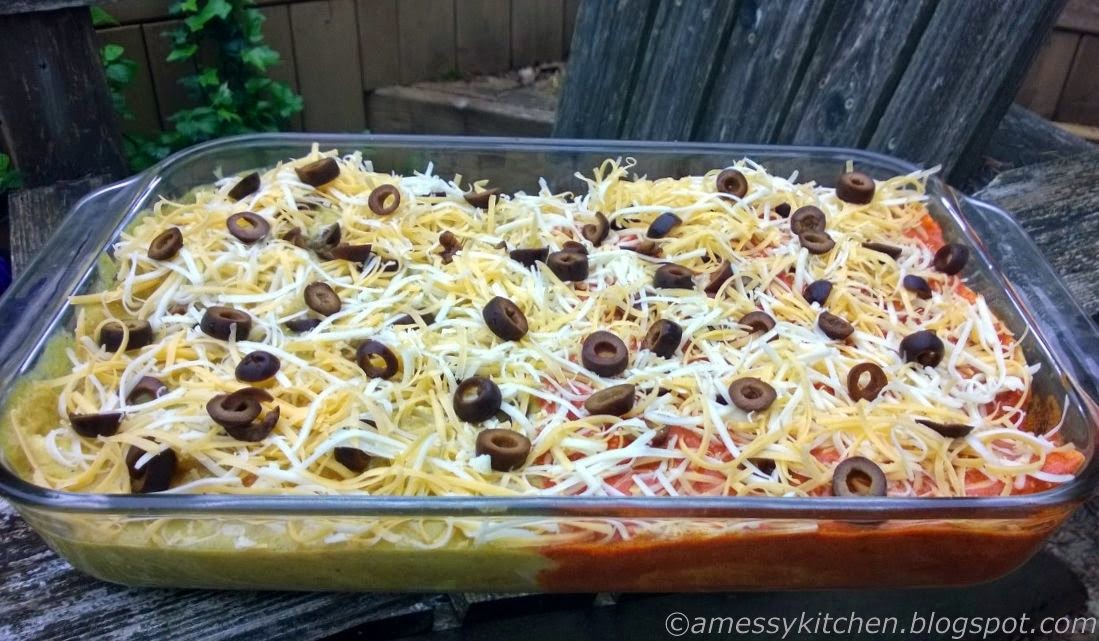 The other day I was lamenting the fact that I could not find the one single brand of spelt tortilla I had ever seen in stores that did not have allergens in it for R.  That means in particular, no corn, corn derivatives or soy.  So I went back through my Pinterest boards, remembering that I had pinned a promising flour tortilla recipe within the last few months.  I found it and tried it out.  And it was a total winner!  They are called Best Ever Homemade Flour Tortillas and they did not disappoint.  I made mine with white spelt flour and coconut oil.  (That's refined oil with no coconut flavor.)  It took about ¼ cup plus two tbsp extra flour to get the dough to the proper smooth state, not too sticky.  That's the nature of spelt.  That dough is deliciously soft!  I love the Café Sucré Farine blog and highly recommend checking it out.  Here is how my tortillas turned out: 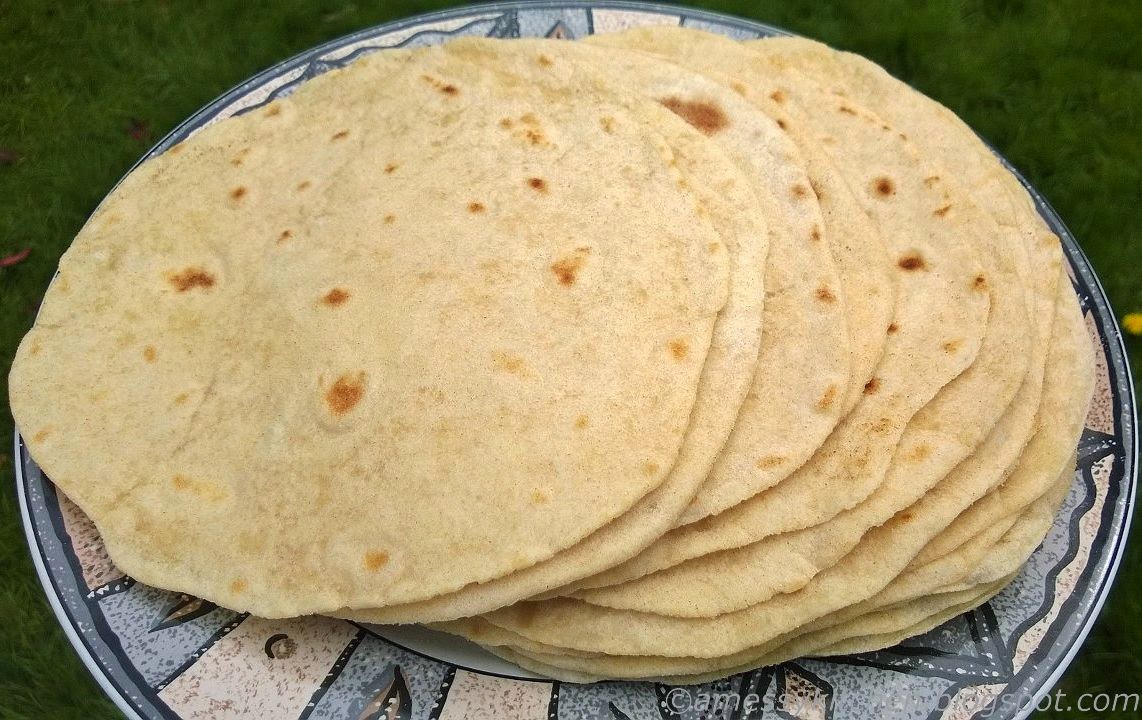 They were mostly around seven inches.  I did flatten them with a tortilla press the first time instead of my hands.  Then they pull back into a nice round patty of about four inches.  After resting, they roll out thin very easily.  I used half the batch for tonight's enchiladas, the rest I froze for later.

The other cool find I had was an enchilada sauce that was also allergen friendly.  A brand called Frontera that so far, I have only seen at Whole Paycheck.  I got one red and one green to try and decided to do both at once tonight.  Hubby liked the green best but liked the red as well.  The girls chose red and didn't try the green, but since they cleaned their plates and each ate an entire enchilada, I am assuming it was very good for them.  They have never eaten the tortilla out of an enchilada type casserole or dish when I used store bought, only picked out the filling.  One more super win for the homemade tortillas.  As a matter of fact, S ate the tortilla first and then the filling after some prompting.  Once she tasted it though, she cleaned her plate too.  We are all happily stuffed tonight.  The sauce is lightly spicy but not too much for my girls.  Hubby could have put some green tabasco on the green side but was happy without as well.  You can always use pepper jack cheese and hot salsa if you like it hotter.  I dressed up a bechamel to make it just a touch cheesy and add to the enchilada sauce.  When asked if this was a make again dish, hubs said, "Yes, definitely - preferably on a Friday when we can have leftovers for lunch on the weekend."  Everyone was "starving" tonight and dinner disappeared so fast I only got one quick phone photo of the finished dish! 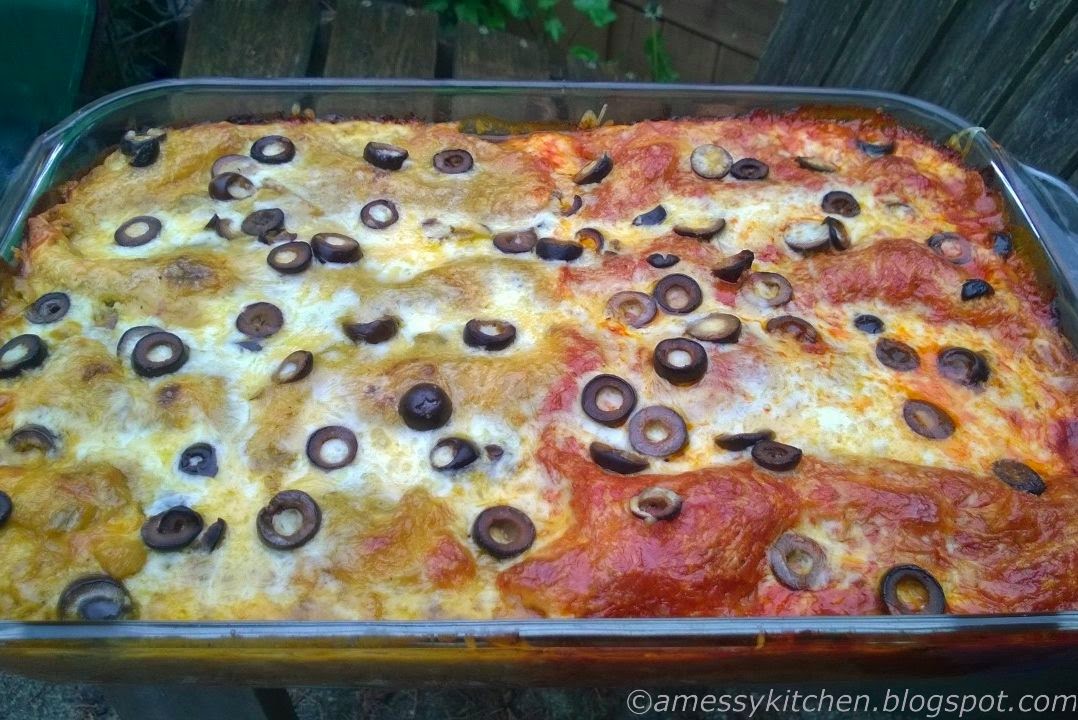 (Next day, 6 year old S is begging for leftover enchiladas for her dinner.  One of each.  Well, one half of each, she is only 6!)


Saute the ground beef and onions in a large pan until the beef is browned and the onions are tender.  Mix in the beans, chilies, salt, cumin, chili powder and turmeric.  Set aside, off the heat. 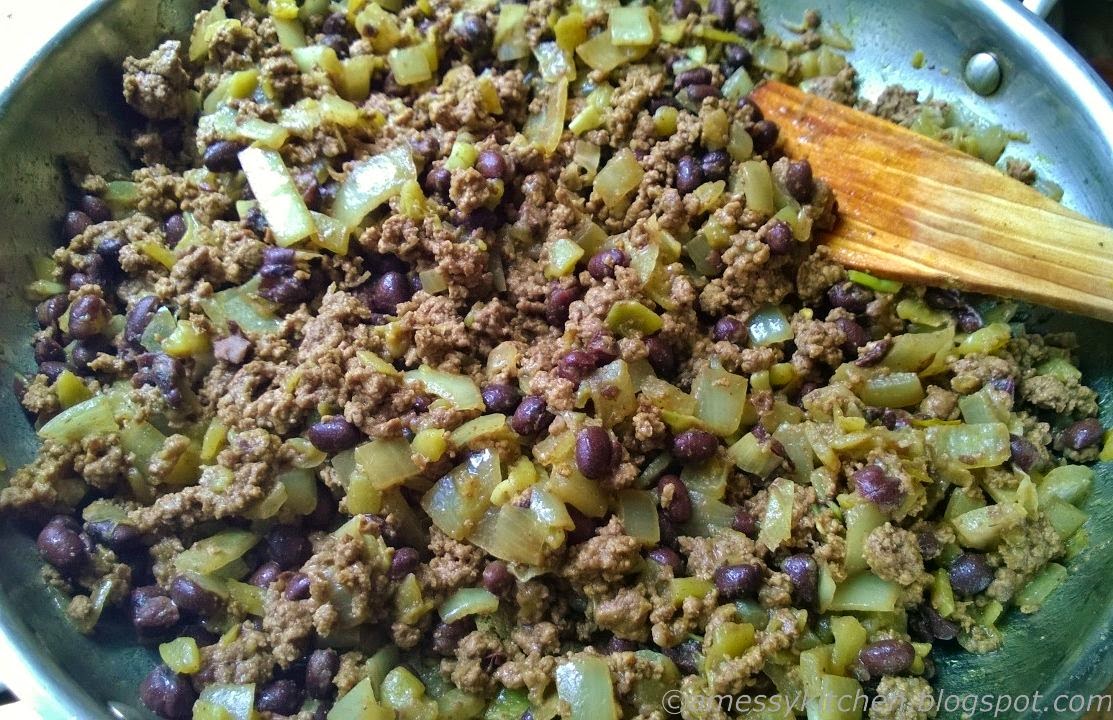 In a medium saucepan over medium heat, melt the butter and add the flour.  Cook and stir for a minute until foaming.  Take off the heat and slowly add milk, stirring or whisking constantly until smooth.  Return to heat and cook until mixture boils and thickens slightly.  Add in the salt, pepper and turmeric.  Remove from heat and stir in the ½ cup cheese until melted.  Then stir in the salsa.  If using one kind of enchilada sauce, combine it all with the cheese sauce.  If using both red and green, divide the cheese sauce in two and add separately to the sauces.  Stir 1 cup of the sauce back into the filling, ½ cup each of red and green sauce.  Spread ½ cup of sauce over the bottom of a 9x13" baking dish, ¼ cup each of red and green on each half of the pan.  Warm the tortillas slightly to roll easier, and divide the filling evenly among them.  Roll up and place seam side down in the baking dish. 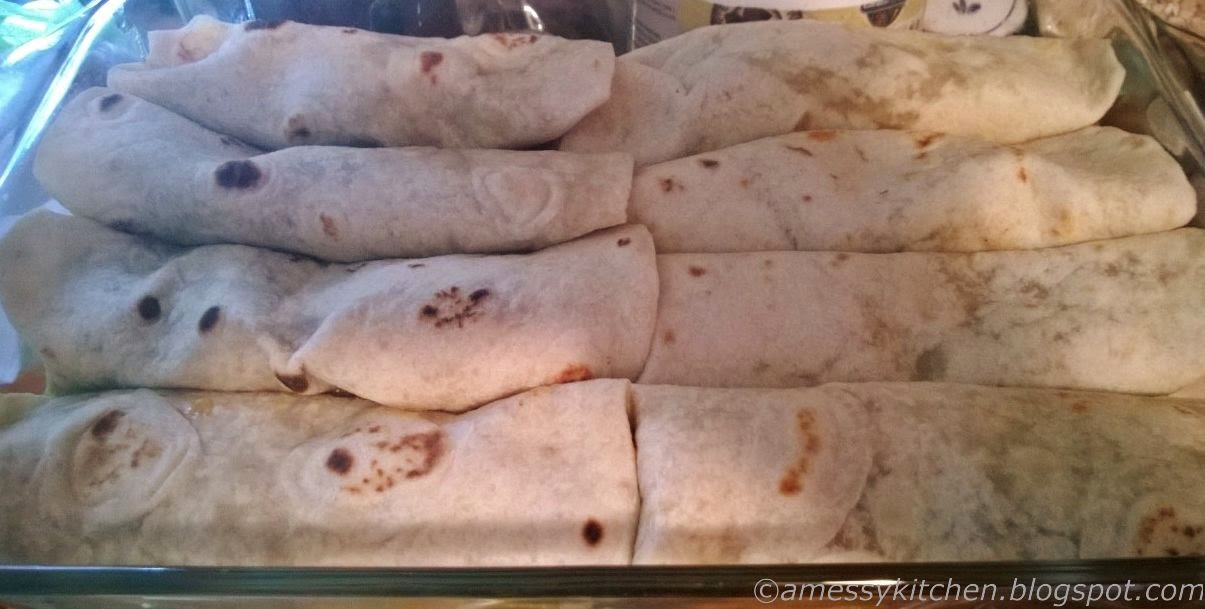 Once the enchiladas are all lined up in the pan, top with the remaining sauce, one color on each half.  Mix the cheddar and jack cheeses together and sprinkle over the top of the sauce.  Then spread the olives evenly over as well.  Cover the dish with foil and bake at 375ºF for 35 minutes.  Remove foil and bake for another 10 minutes or until done to your liking.  Let sit for a few minutes before cutting and serving.

Garnish with fresh chopped cilantro if you want to be fancy.
at April 23, 2014 No comments: 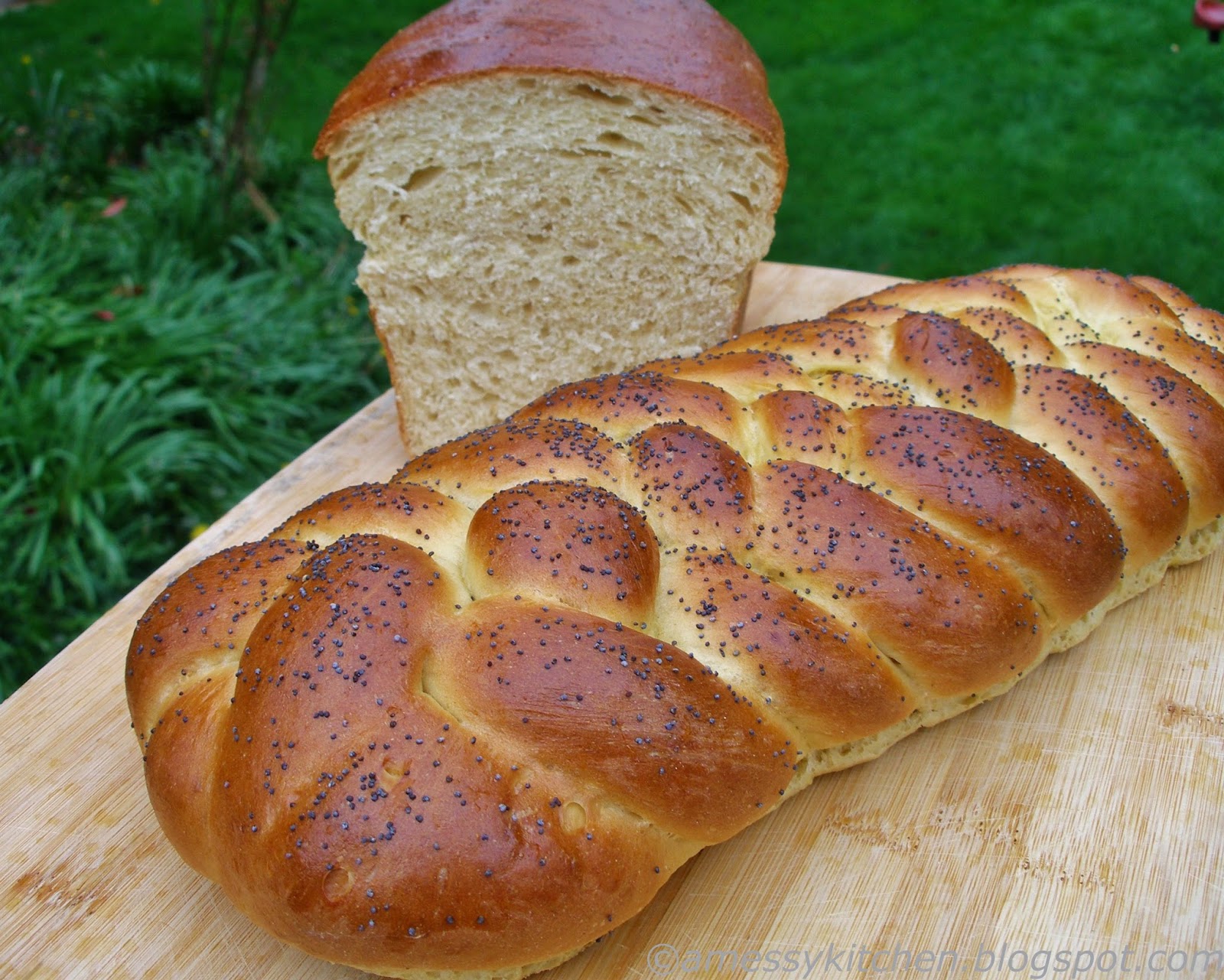 Here is another catch up recipe that is very appropriate since Easter is only about a week away.  Sweet and That's It is where you can find great step by step pictures on how to make it.  And it was originally posted by one of the BBB right here in 2008.  It's funny that I've never made challah before, because we love egg bread.  I'm sure I've made something similar.  The girls loved this version, not as sweet or rich as some challahs I've seen, but so soft and spongy that they went through half a loaf in one sitting.  The recipe makes two loaves so I decided to do one in the traditional braid and one in a loaf pan.  They both turned out beautiful and I'll definitely make them again.  Might try a more enriched version next to see which we prefer.  I think this one will keep better.  If we have any leftovers, and that is a big IF, I understand that this makes the most marvelous french toast.  An egg bread for an eggy bread.  Perfect.  Since I used spelt flour for my loaf, I did not beat the batter for minutes at a time.  I added by portions as it was worked in and only kneaded until the dough was smooth and elastic.  Just a few minutes for spelt.  And while this is traditionally a fancy braided bread, it made a great sandwich style loaf as well. 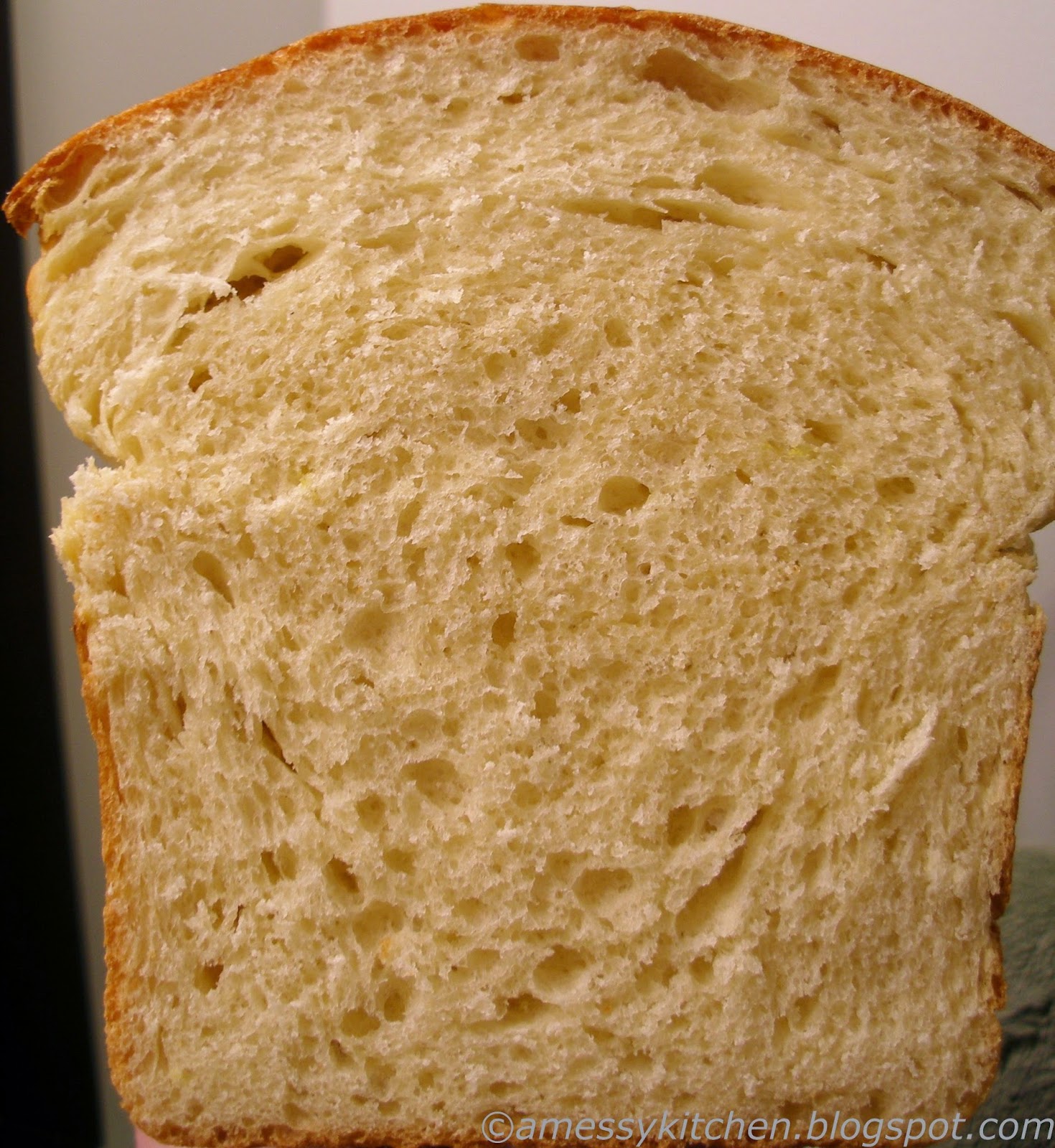 
Combine 1¼ cup of flour, sugar, salt and yeast in a large bowl.  Mix in the softened butter (and yogurt if using).  Stir the saffron into the warm water until it dissolves and wait for it to cool down a bit (100-110°F).  Add the saffron water slowly to the flour mixture and blend thoroughly.  Beat for about 2 minutes with an electric mixer (or in the stand mixer) at medium speed, scraping the bowl occasionally.  (I did this part in the bread machine.)  Separate the yolk and white of one egg. Reserve the yolk for the egg wash.  Blend the egg white and the other 3 eggs into the batter.  Stir ½ cup flour into the batter and beat at high speed for 2 minutes, scraping the bowl occasionally.  Blend in enough additional flour to make a soft dough.  Knead the dough on a lightly floured board for 8 to 10 minutes or until it is smooth and elastic.  Cover the dough and allow to rise in a warm, draft free place until double in bulk (about one hour).

To shape the dough, flour a pastry board or cloth lightly and set the dough on it.  Divide dough in half and cover one piece.  You can either do a 6 strand braid as I did, (google for directions), or do a stacked regular 3 strand braid.  Use 2/3 dough for the base and 1/3 for the top.  Tuck the ends under for a nice finish.  Repeat braiding with second piece of dough.  Place the loaves on a parchment lined baking sheet.  Mix the reserved egg yolk with the 1 tsp cold water and brush the top of the loaves with the mixture.  Sprinkle with poppy seeds and let rise covered with plastic wrap or a towel until almost double, in a warm draft free place (about 1 hour).  Meanwhile preheat the oven to 400°F.  Bake for 20-25 minutes until done.  Let cool completely on a wire rack before slicing. 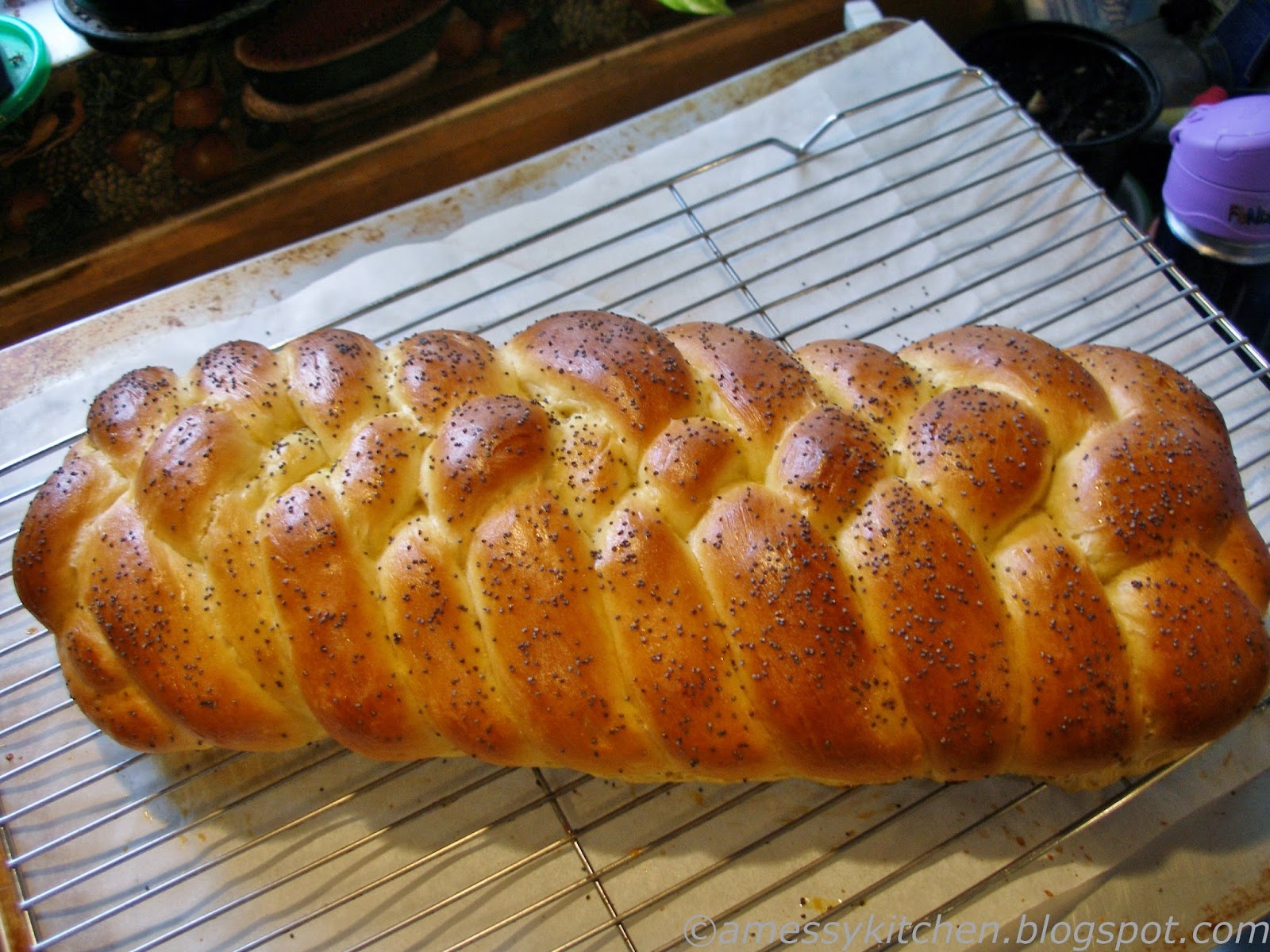 This post will go up for Yeastspotting!
at April 12, 2014 No comments: 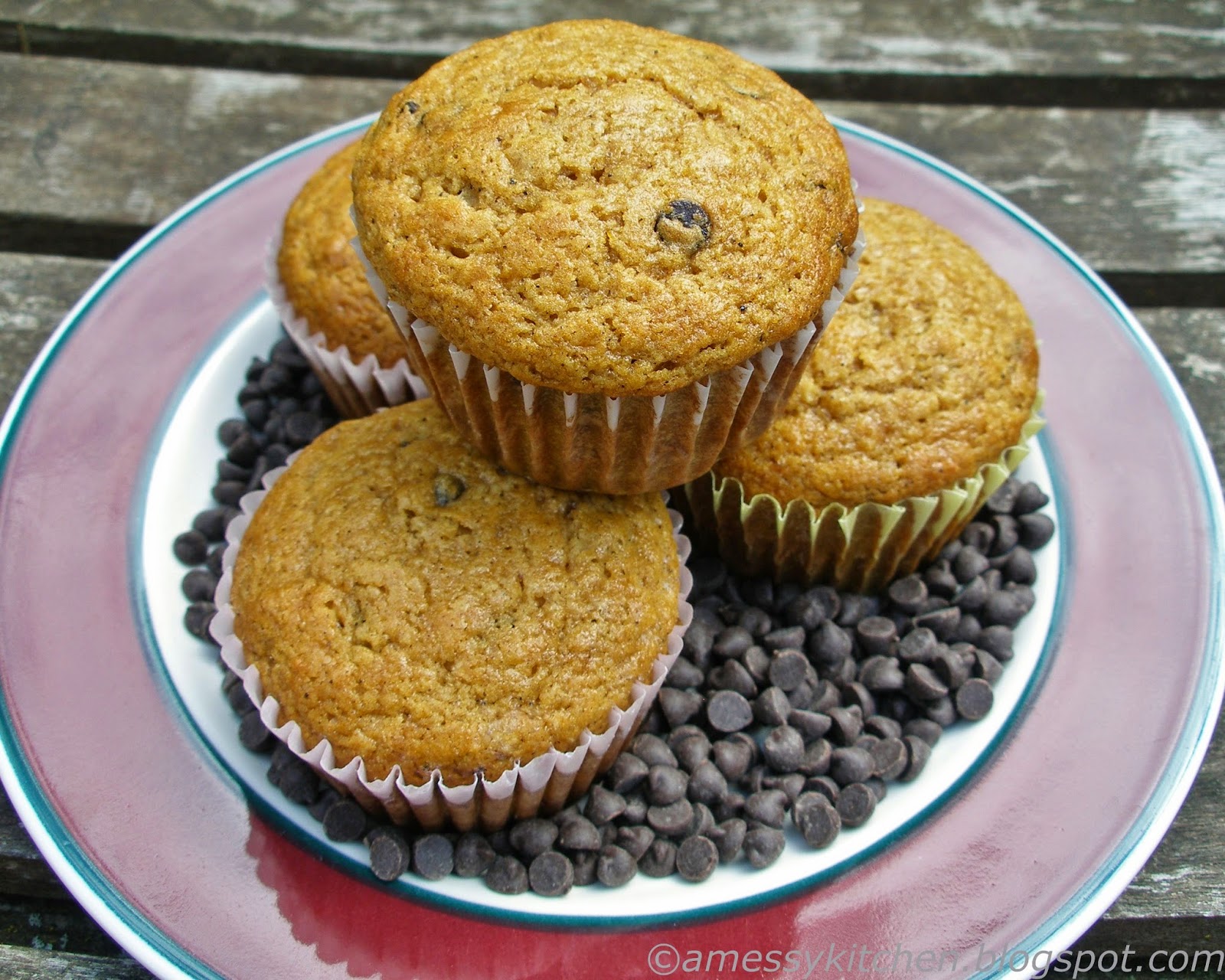 I made these to use up a squash that had been sitting around for a couple months.  (Love winter squash that last that way.)  I wasn't expecting too much.  I will be getting butternut squash more often now.  These are so tasty and moist that I can't eat just one at a time, I must have two.  At least the standard muffin tin size still makes it less than a costco muffin.  I heated one up for 6 year old S this morning.  She raised her eyebrows skeptically and slightly wrinkled her nose.  (They don't look like much.)  She said, "It looks okay...  It smells good...  Mmmmmm, it's delicious!"  I love her little dramatic pauses.  I haven't gotten R's reaction to them yet, she has one in her lunch box today and had the same skeptical reaction when I told her about it.  We'll find out shortly if they fly with her as well.  Well, they got an emphatic GOOD! with eyes wide open and a big smile.  And a request for more.

This was originally a pumpkin recipe, but the butternut squash is so mild flavored that this is a year round little spice muffin.  Almost a cupcake.  Slap some cream cheese frosting on there and it would qualify.  This batch made a baker's dozen muffins for me with the extra going in a custard cup.  The inside of these muffins is chock full of chocolate chips, but if you want to be fancy, you can sprinkle some on top of the batter to look extra pretty.

Update:  I have tried these with canned butternut squash that I found, and while they are still good and the girls like them, I prefer the fresh squash option.

Preheat oven to 350ºF and line a standard muffin tin with paper liners.  Blend the eggs, coconut oil, squash, milk and sugar together in a blender or food processor.  In a medium bowl, combine the flour, salt, soda, spices and chocolate chips until thoroughly blended.  Pour the egg mixture into the dry ingredient bowl and mix by spoon or whisk, just until combined and all the flour is moist.

Scoop the batter into the tins using a muffin scoop or large spoon.  The wells should be about ¾ full.  Baker for about 20 minutes or until light golden on top and done.  Cool for about 5 minutes before removing from pan to cool on a rack.  Delicious warm or room temperature.

Especially delicious warm and melty chocolatey with a glass of milk!