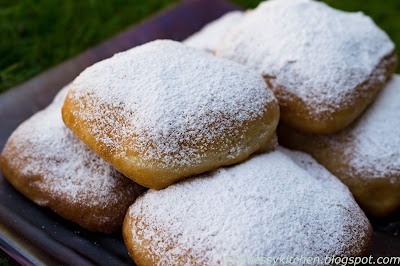 Well this was a first for me, I've never actually deep fried before.  Pan-fried, but not deep fried.  My kids were excited to try these out and started quoting lines from Disney's Princess and the Frog, about "man-catching beignets".  They both really liked how they turned out too!  I made mine with light spelt flour and ended up having to add twice as much almost to end up with something still sticky but at least not like batter.  I thought I had reduced the liquid enough but apparently not.  So they turned out slightly chewy.  Great flavor, but I am thinking they should be more tender and melt in the mouth, like a raised yeast donut.  Having never had one, I don't know what the texture should be!  They were delicious though. 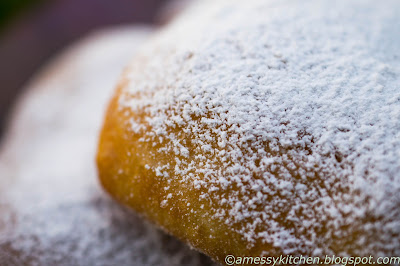 I have a gas stove and wasn't all that keen on the thought of deep frying over an open flame source, so I grabbed an inexpensive and small deep fryer from amazon.  I was very pleased with how it worked, especially the fact that it didn't heat up the kitchen at all, since it is sweltering this week.  Next time I may leave the dough super sticky and just make sure to flour the board extremely well.  I kind of did my own thing with the recipe, hardly reading the directions for forming the dough and just throwing it together as usual.  It was pretty forgiving considering the crazy morning I had while making it.  Our kitty, who had escaped and been missing for three days, turned up in a neighbor's yard, they called us, and she promptly disappeared.  So we called and tapped food cans for her for half an hour while my dough sat out, forgotten.  I had made it the night before anyway though and just stuck it in the fridge, so all it did was happily come to room temperature.  Then, an hour later, she turned up in a live trap that our friends had lent us, so my cut squares again were forgotten for 20 minutes.  Our family was noticeably happier today with kitty safely back inside.  We thought, (the adults at least), that she was gone for good.  All that to say, even with all the abuse, the recipe still turned out some great fried dough! 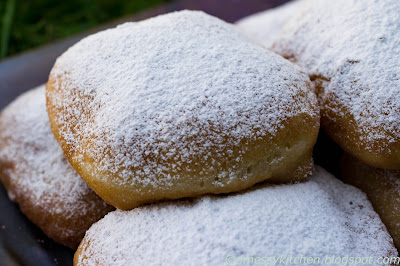 If you want to try your hand at deep frying and see what all the other babes have come up with for their beignets, please bake along with us as a buddy this month!  You don't have to turn on the oven even!  Perks are bragging rights for awesome beignets, tasty fried dough treats, and a buddy badge to add to your post.  All you have to do is make some beignets between now and the 29th, and send your picture and/or post to the host kitchen at Feeding My Enthusiasms.  There are many options, powdered sugar, cinnamon sugar, banana filled, savory, whatever you can imagine.  Ooo, Nutella filled...  Yes, I felt it prudent to only make half a batch. 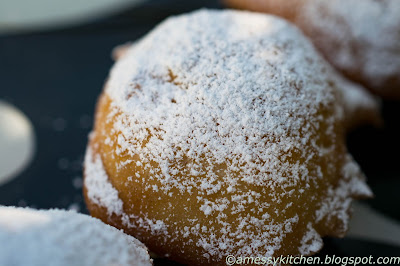 
Activate the yeast with the water and sugar, in the bowl of a stand mixer.  Let it stand until foamy, about 5 minutes.  In another bowl, whisk together flour, salt, and nutmeg.  Add the soft butter and egg to the yeast mixture and whisk lightly with a fork before adding the milk.  Mix in 1½ cups of the flour mixture to combine, then add 1¾ cups more flour mixture and mix until incorporated.  The dough will be quite sticky.  Turn out the dough onto a well floured surface. Knead in remaining ¼ cup flour mixture by hand until the dough is smooth, about 5 minutes.


Place dough in a bowl, covered loosely with plastic wrap.  Let it stand in a warm, draft-free spot until doubled in size, about 1 hour.   (I stuck mine directly in the fridge overnight and let it come to room temperature in the morning.)  Turn out dough onto a lightly floured surface and punch down. Use a bench scraper to cut dough in half if making two kinds of beignets. Using a lightly floured rolling pin, roll out one portion of dough into a 9-inch square.  Using a pizza wheel or sharp knife, cut the dough into approximately 3-inch squares.  Transfer squares to a floured baking sheet and cover loosely with plastic wrap.  Let rise in a warm, draft-free spot for 30 minutes.  (I've seen some of the refrigerated recipes call for frying the dough while still cold.  I am glad I let mine proof until puffy.)


Roll out the second portion of dough into a 9-inch by 18-inch rectangle.  Place banana slices in square groups of four slices on one half of the dough, leaving a small space between groups of bananas.  Fold the other half of the dough over the bananas.  Press down using the edge of your hand between the groups of bananas to seal.  Cut between the groups using the pizza wheel or a sharp knife. Transfer banana squares to a floured baking sheet and cover loosely with plastic wrap.  Let rise in a warm, draft-free spot for 30 minutes.


Meanwhile, heat oil in a medium pot or deep-fryer until it registers 350ºF on a deep-fry thermometer. 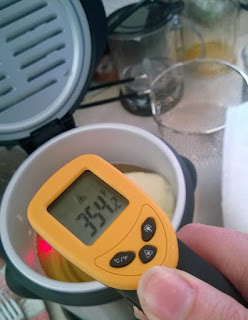 Working in batches, add a few squares to the oil and fry, rolling them around constantly with a slotted spoon or spider, until golden brown all over, 1 to 2 minutes.  (I just fried them one side at a time and flipped when they were light golden.  Too dark and they got a bit too chewy in the crust.) 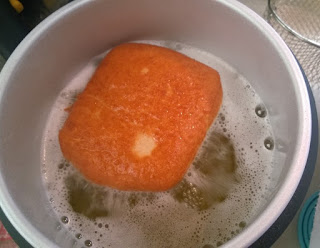 Transfer beignets to a paper towel-lined baking sheet to drain. Coat with confectioners' sugar (regular beignets) or cinnamon sugar (banana beignets), and repeat process with remaining dough and more confectioners' sugar.  (If you want them to be perfect squares, you can slice off any rounded edges and fry them up for tasty testers!) 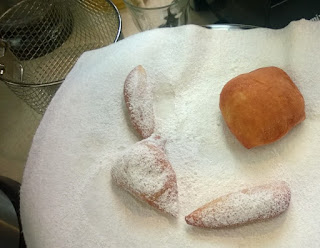 Beignets are best served fresh and warm.  We really enjoyed them.  All in one day.  As it should be.  Again, half batch for a reason. 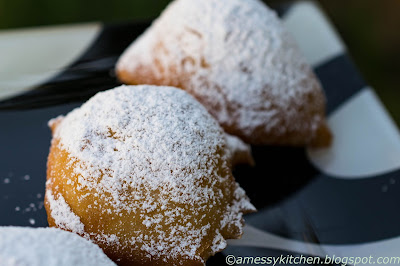