Velvety Bean Bread with the BBB 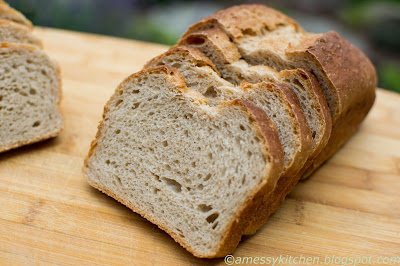 My turn to host this month!  Join the Bread Baking Babes and bake up a unique little loaf that is high in protein but a little lower in gluten than normal.  I was intrigued by the description of this bread.  Nice brown crust, velvet smooth, fine moist crumb.  It makes very small loaves, so an 8x4" pan or smaller will do and you could probably fit the whole recipe in one larger loaf pan.  Because of the more delicate protein structure, it will over rise easily in a warm kitchen and indeed took much less time to prove for me than the recipe stated.  My first batch rose up to an inch over the edge of the pan and I could tell it was over risen.  So it totally deflated when I slashed it.  Still tasted great, but had a close crumb at the bottom as a result though still velvety and soft.  Fortunately I was able to try again with the rest of the beans I cooked.  You couldn't really see my chives after baking, but you could taste them.  The loaf pictured is a plain version.  You will see loaves with different kinds of beans that were available if you check out the rest of the Babe's results, as well as those that made one larger instead of two very small loaves.  I might try it one more time with canned beans, maybe cannelini beans (white kidney) because they are easier to find than navy beans.  This is a lovely little bread and we would love for you to bake along with us!  Just bake your version of this bread by July 30th and send me a note with your results and a picture or link to your post at eleyana(AT)aol(DOT)com with Buddy Bread in the subject line and I will include you in our buddy round up at the beginning of next month and send you a Buddy badge graphic to keep and/or add to your post.  You don't have to have a blog to participate, a picture is fine!
(I recommend a food processor rather than a blender to get the beans smooth.  If you only have a blender, I suggest using some of the 1 cup water in the recipe to facilitate blending, otherwise it will be difficult to keep the beans moving.  Actually, it would help in the food processor as well.)

And here's a great little article on the different white beans:

Velvety Bean Bread
from Home Baking: The Artful Mix of Flour and Tradition around the World
Makes 2 small pan loaves
Gram weights are from the Dutch version of the book

Dissolve yeast in water.  Process beans until smooth, transfer to a large bowl or stand mixer.  Stir yeast mixture into beans.  Add the whole wheat flour and stir for one minute, in one direction, to develop the dough.  Add the oil, salt, and chives if using, and stir them in.  Add 1 cup of the all purpose flour and stir in.  Add the remaining flour and knead in with a dough hook, or work in and knead by hand for about 5 minutes, until smooth.

Place dough in a bowl, cover, and let rise for 3 hours, until almost doubled in volume.  (There should be about 2.5 pounds of dough.)

Turn out dough and divide in half.  Butter two 8x4" pans.  Form each portion of dough into a loaf and place seam side down in the pans.  The directions say to let rise for 2½ hours.  That was WAY too long for my kitchen.  The above loaf was baked after 1 hour.  You'll have to watch the dough for proper rise.  Check at 1 hour and continue to proof if needed.
Preheat oven to 400ºF, have a spray bottle or small cup of water ready for steam.  Slash each loaf lengthwise , place in oven and bake for 5 minutes, adding steam every couple minutes with the sprayer or cup.  Bake for 15 minutes, then reduce heat to 375ºF and bake for 25 minutes until rich brown with a matte finish.  Turn the loaves out and check for doneness. Finish cooling on a wire rack before slicing. 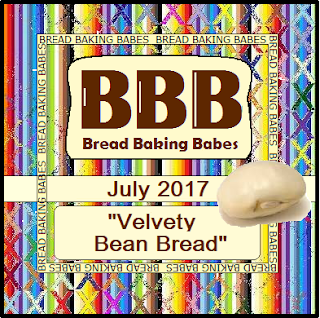 Approximate nutrition per ½" slice when making two small loaves:
(That's about 15 slices per loaf for an 8x4" pan) 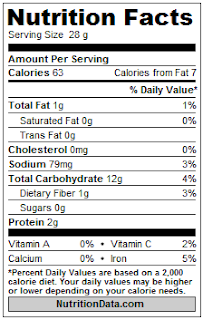 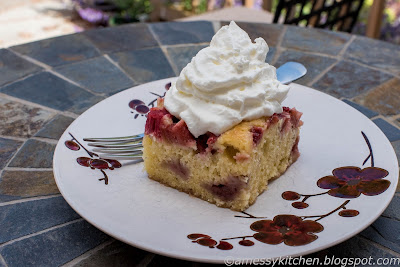 This week I decided to do some experimentation.  I had some old recipes from both my Grandmother and Great Grandmother that were very similar and I actually had a vague recollection of eating them as well.  You may have had or seen a recipe like this yourself, either in an old recipe box or in a magazine clipping from decades ago.  Great Grandma's recipe was call World Concern Cake and consisted of 5 ingredients and no directions.  It was rhubarb, sugar, strawberry jello mix, miniature marshmallows, and yellow cake mix.  Well, there was optional nuts on top.  Grandma's recipe was called Shortcut Shortcake and pretty similar except it actually had a scratch cake built in.  But it still called for the marshmallows and dry jello mix.  Basically what these are is a shortcut cobbler, not quite a self-saucing dessert as I believe they call it across the pond.  Actually, the type where you just sprinkle on the dry cake mix and jello and top with water or melted butter ends up more like a streusel or crunch topping.  I chose to go with the cobbler-like option.  Well, of course you can remake it as a regular cobbler, but where's the fun in that?  I wanted to see if I could come up with a pretty close version, without using store bought cake mix OR jello.  Cake mix is easy to make at home.  And looking at the recipe for Grandma's scratch filling, it's almost exactly the proportions for half of my favorite yellow cake mix recipe.  (I love having my Great Grandmother's writing on the rhubarb cake recipe, that was back when penmanship was a whole class!)

The challenge was going to be the dry jello mix.  I looked online, couldn't find any references for a dry jello mix.  Pudding mix, yes, jello, no.  Plenty of prepared scratch jello made with juice and gelatin.  But that's easy.  So recently I noticed Jell-O brand had come out with a new offering called Simply Good in their gelatin dessert mix options.  Natural Flavors, no artificial dyes, flavors or preservatives.  That's really cool, and I could have used one of those.  But again, where's the fun in that?  I did buy some, and my girls love them made up for just plain jello desserts, but what they did give me were some very good proportions to test out.  72g sugar per package of four servings, 4g protein.  That told me approximately how much sugar and gelatin to use.  (Four grams gelatin was not enough to give a firm set to the gel, I should have followed my instincts for teaspoons per cup of water, but it wasn't that pertinent to the recipe.)  Then, "adipic acid (for tartness)", well that can be citric acid that I have on hand.  I tested out different amounts and ½ tsp per batch seemed to do well.  Then it listed dried fruit juices for flavor and color.  That's where the times and technologies make things fun nowadays.  I was able to order freeze dried fruit juice powders in a few flavors.  Powdered freeze dried fruit would have worked in a pinch but I wanted to see if I could make a plain jello with this stuff too, just for kicks.  The fruit juice powders would mix up nice and clear. 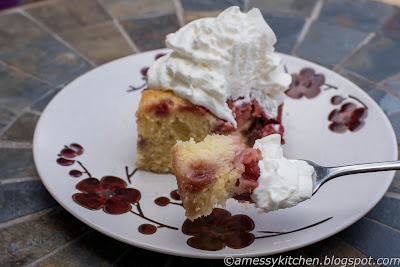 As for the mini marshmallows, what to do about those...  Both recipes called for them in different amounts.  I could have used homemade marshmallow fluff, I even have some purchased tubs made with tapioca syrup instead of corn syrup for my kids.  Making marshmallows and cutting up mini was an option as well, but what were they really in the recipe for?  I thought probably just more sweetening and thickening for the cobbler filling.  So I actually decided to omit them and added 2 more grams of gelatin in their place.  One thing that reinforced this notion, is that the first recipe had 3 cups of mini marshmallows and a 3oz pkg of jello.  The second had only 1 cup mini marshmallows, but a 6oz pkg of jello.  Still essentially equivalent amounts of sugar and gelatin.  I also figured that since this cake basically turns itself upside down while baking, you don't have any loft from the marshmallows, since they would melt into the dessert as it bakes and flips itself.  So I feel safe enough without them.

And now, after consulting with my mom, who remembers the recipe better, the marshmallows simply come up to make a very sticky glaze on the top of the cake, like a self-frosting thing.  Well, I would much rather either do a sugar crunch sprinkle or a powdered sugar glaze than a super sticky frosting.  Sorry Grandmas.  I will take that liberty with the original recipe.

If you want to try it out, here is some of what I did, combined with the original recipes.  Go ahead and use store bought jello by all means!  But it really did turn out lovely with the dried fruit juice jello.  And it totally did not need anything but whipped cream on the top!  YUM.

5 cups frozen strawberries and rhubarb, thawed (I ended up using a small pkg of frozen rhubarb and slicing up some frozen strawberries to make it up to five cups.  About 50/50)
½ cup sugar
1 6oz pkg Strawberry jello (I used about 6g gelatin, ½ tsp citric acid, about 2 tbsp juice powder, and 144g sugar)  Just go for the Simply Good Jello, this was a fun experiment for me.
1 box yellow cake mix (Since the proportions were so close, I used the homemade cake mix with the eggs and milk that my Grandmother listed)
3 eggs
1 cup milk

Combine cake mix, eggs, and milk in a bowl and beat together for 2-3 minutes.  Pour into the prepared pan and spread evenly.

Spoon the fruit and jello mixture gently on top of the batter, evenly spacing the fruit.  Pour any remaining liquid in the bowl over the top as well.

Bake for 40-60 minutes until done in the middle.  Test with a toothpick or cake tester. 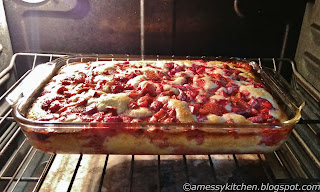 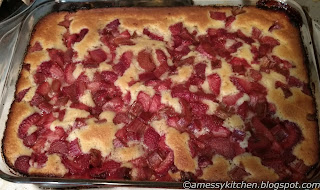 Let cool for 10-15 minutes before serving.  Best enjoyed warm, with whipped cream on top, this cobbler reheats beautifully.  The edges are more likely to have some nice, delicious sauce underneath which will set slightly when cold.  Refrigerate leftovers. 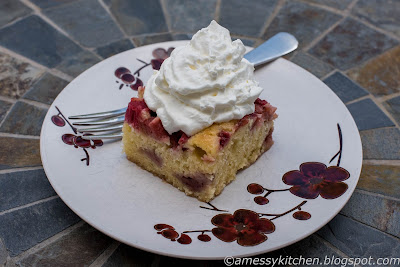