Baked Currant Donuts with the BBB 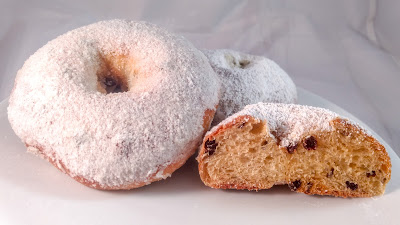 Soft, light, tender, and ... baked.  These donuts are lighter than a bun though more bread-like than a fried donut.  But since they are yeast risen, they are closer than the batter baked donuts leavened with baking powder.  And they are brilliant, eaten warm.  The dough is beautifully silky, somewhat like a brioche.  I used slightly less butter than it calls for since that was what I had on hand and I prefer a less rich brioche anyway.  I also used cashew milk since I was out of regular milk.  I dried the currants very well before mixing with the dough and only added one extra tbsp flour to mix them in and maintain a soft and silky dough.

We would love for you to join in as a buddy baker this month! These donuts make your kitchen smell so deliciously buttery and lightly spiced, a great holiday treat or any time of the year!  You don't have to have a blog to participate, a picture will do. Just send a picture or your post of your finished donuts to Feeding My Enthusiasms at plachman at sonic dot net along with a photo and your baking experience by Dec. 29th and be sure to put BBBuddy in the subject line.  You will receive a Bread Baking Buddy graphic to keep or add to your post, and be included in our Buddy round up at the end of the month.  New recipes are posted every month on the 16th. Check out our Facebook group to see the participants' baking results during that time. 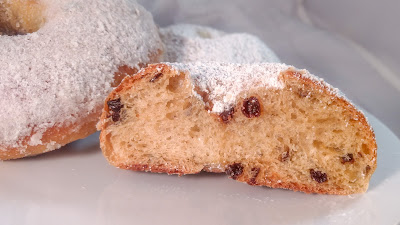 In the bowl of a stand mixer, combine flour, nutmeg, and cinnamon with ¼ cup of sugar.  Add milk, egg, egg yolk and half of softened butter.  Beat with a dough hook at low speed for 3 minutes.  Beat in yeast mixture, then salt.  Beat dough on medium speed until soft and silky, about 8 minutes.  The dough should start to pull cleanly away from bowl.

While the machine is running, add remaining softened butter to dough by the half tbsp, beating at low speed between additions until incorporated.

Drain currants and press out any excess water with paper toweling.  Add to dough and beat in at low speed. 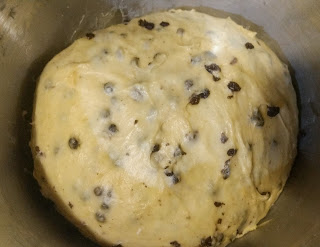 Line two large baking sheets with parchment or foil.  Turn dough out onto lightly floured work surface and cut it into 12 equal pieces. Form each piece into a ball and arrange six balls on each prepared baking sheet, smooth side up.  Cover with plastic wrap and let rest for 10 minutes.

With lightly floured hands, press each ball into a flat, 4-inch disc. Use a 1¼ inch round cutter to cut out the center hole of each disc returning the holes to the baking sheets.  There will be six donuts and six donut holes on each sheet.  Cover loosely with plastic wrap and let stand for 1 hour until risen slightly. 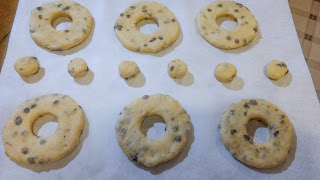 Preheat oven to 400º F.  Position racks in upper and lower thirds.  (I sprayed one batch of my donuts with coconut oil baking spray before baking and they turned out softer than the ones I did not spray.)  Bake donuts and holes for 20-25 minutes, switching pans from top to bottom and front to back halfway through baking time.  (Mine turned out better at 375º.)  Donuts are done when they are golden and puffy and when the internal temperature at thickest part registers 200º F.

Spread sugar in a shallow bowl.  Brush hot donuts and holes on both sides with melted butter and dredge them in sugar.  Transfer to a serving dish and serve at once.  (I actually did the shake and bake method with the powdered sugar, tossing them in a ziptop bag with the sugar.  For the fine sugar, I held the donut over the bowl and sprinkled the sugar over with my fingers to coat evenly.) 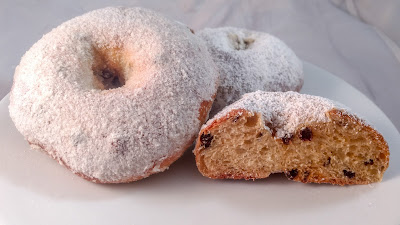 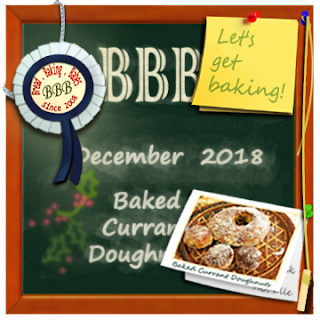 Approximate nutrition for one donut: 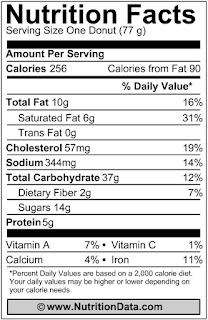